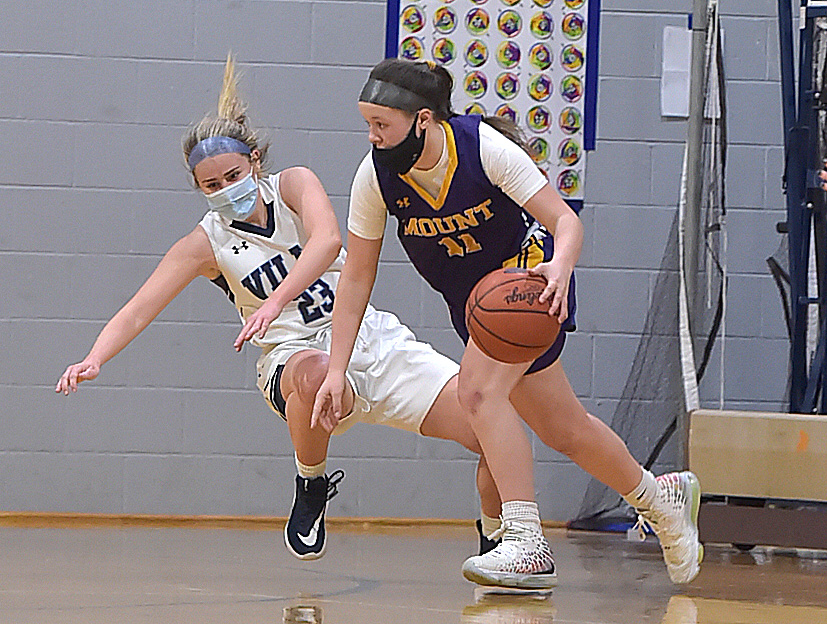 no images were found

MALVERN >> Villa Maria Academy’s defense proved tough against visiting Mount St. Joseph for the first three quarters Wednesday, and really stepped up in the third quarter, holding the Magic to only four points and no field goals while building a 31-23 lead.

But unfortunately for the hosts, Mount turned the tables in the fourth quarter. The visitors’ pressure defense forced numerous Hurricane turnovers that resulted in quick Magic field goals, as Mount exploded for 24 points in the final stanza and a 47-43 win.

The Magic’s victory improved their record to 3-2, while the hosts fell to 3-2. The entire game proved to be a physical defensive battle on both sides that produced numerous missed shots and turnovers.

Mount head coach Matt Feeney said, “Our pressure defense really did well in the fourth quarter, and our defense fed everything [for us]. We also were able to stop Villa Maria’s offensive rebounds late in the game. That Faith Iacone killed us in the first half with her rebounding – she’s a tough player, and a good kid.”

Villa Maria head coach Kathy McCartney said, “Our youth and inexperience showed up in the fourth quarter, when we were trying to pick up in transition on defense. It was a physical defensive battle on both sides tonight.

“It’s still early in the season. We’ll get another shot at Mount, and we’ll be smarter for this [game].”

The Hurricanes held a small lead during most of the first half, and reached halftime with a 20-19 lead. Iacone, who has been Villa Maria’s leading scorer and rebounder so far this season, teamed with senior Ally Trebelev for 16 of the Hurricanes’ 20 first-half points.

On the Mount side, sophomore Lauren Hoffman drained a couple of treys late in the second quarter to keep the Magic close.

Villa Maria widened its lead in the third quarter. Iacone hit a trey from the left corner to give the hosts a 23-19 lead, then Trebelev drove for a basket that increased the Hurricanes’ lead to 25-19. Unfortunately for the Hurricanes, Trebelev twisted her ankle on the play, and was sidelined for the remainder of the game.

“That hurt us [later on] – Ally is one of our senior leaders,” said McCartney of Trebelev, who will be playing basketball for Franklin & Marshall next winter.

Midway through the third period, Hurricane freshman Carly Catania hit a trey from the left side to give the hosts a 27-20 lead; and one minute later Iacone was fouled after grabbing an offensive rebound and made both free throws to give Villa Maria a 29-20 lead. Late in the third quarter, Iacone grabbed another offensive board off the glass and scored to make it 31-21.

Early in the fourth quarter, a 6-0 Mount run cut the Villa Maria lead to 31-29. A Hurricane turnover was followed by a transition layup by Mount’s Georgia Pickett; a Magic steal led to a Kiersten Pumilia drive for a basket; then with 6:30 left Mount’s Chloe McGorty was fouled and made both free throws to complete the 6-0 run.

Catania, who tallied six points in the final quarter, scored underneath to give the hosts a 33-29 lead; then following a couple of Mount free throws drove in for another basket for a 35-31 Villa lead.

Meanwhile, Villa Maria was picking up fouls (12 in the second half), and when Mount’s Grace Niekelski scored underneath, it cut the Hurricanes’ lead to 35-34.

With 3:37 left, Catania grabbed an offensive rebound and was fouled, making both free throws to give Villa Maria a 37-34 lead. It was the Hurricanes’ last lead of the game.

Niekelski, the lone senior starter on the Magic (who also start four sophomores), nailed a trey from the right side to tie the score at 37-37; then following a Villa foul, Hoffman went to the free throw line and converted two to give Mount a 39-37 lead with 2:11 left.

A Villa turnover was followed by a Niekelski drive for a basket; then after a Hurricane pass was tipped and recovered by Mount, a Villa Maria foul sent Pumilia to the free throw line with 49.2 seconds left. She made both free throws; then following a missed Villa shot from the outside Pumilia was fouled again and converted twice to make the score 45-37 with 35.6 seconds left.

In the final period, Mount was 14-for-16 from the free throw line, and was 24-for-30 from the charity stripe for the game. Niekelski and Pumilia combined for 17 of the Magic’s 24 fourth-quarter points, and Hoffman finished with 16 points on the night.