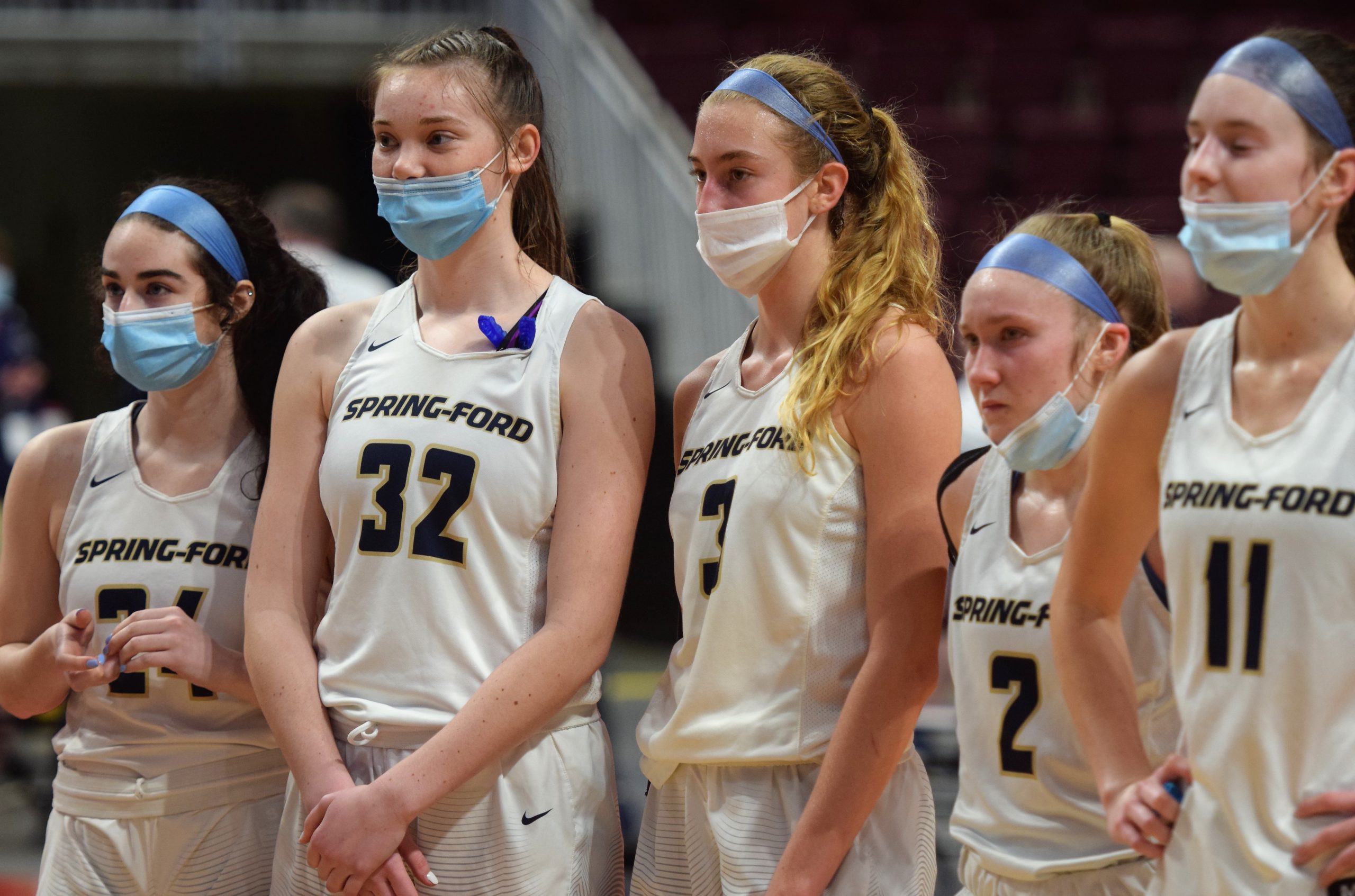 HERSHEY >> Lucy Olsen was ready to run it back right then, right there.

The Spring-Ford senior guard’s sentiment was echoed by classmate Emily Tiffan, standing right next to her.

At times feeling like they were looking at a team in their mirror image, the Rams couldn’t make up for an uncharacteristic offensive game and a big night from North Allegheny’s Lizzy Groetsch as the Tigers topped Spring-Ford at the Giant Center to claim the PIAA Class 6A girls’ basketball title.

Only one team gets to feel good at the end of the PIAA basketball season and Friday night in Hershey, that team wasn’t the Rams, hence their wish to get a rematch they couldn’t have after a 55-40 loss.

The similarities were pretty apparent even before the teams hit the floor in Hershey but once the ball went up, they really stood out. Spring-Ford (24-1) follows the lead of Olsen, its all-state senior heading to Villanova while the Tigers (27-1) go as Groetsch, an all-state point guard off to Penn, goes.

The teams defend well, they have good shooters, skilled post players and were both chasing an elusive state title. On the Rams’ side, it was a mission to hang the program’s first banner since 2013 while North Allegheny was trying to get to the summit for the first time.

So, it wasn’t too surprising that Tiffan thought playing the Tigers was like looking in a mirror.

Groetsch came out hot, scoring seven first quarter points and assisting on a pair of 3-pointers as the WPIAL champion Tigers bolted to a 17-12 lead at the end of the first quarter. Tiffan, who has drawn the toughest defensive assignments all year, did what she could to slow the 5-foot-11 senior and the Rams caught a break when Groetsch picked up her third personal foul with 4:22 left in the opening half.

The future Ivy League guard had to take an unwanted seat on the bench for a few minutes, but didn’t pick up another foul the rest of the way while finishing with a game-high 22 points.

“I’ve battled foul trouble a lot this year, I’m a pretty aggressive player so I’ve been in that situation before,” Groetsch said. “I kept my hands off in the third quarter, didn’t pick up a fourth (foul) and my teammates had my back.

“I was begging (coach Spencer Stefko) to put me back in but sometimes he has to save me from myself.”

That mirror image idea came into play again with the way North Allegheny defended the Rams. Groetsch, who opened up guarding Olsen, said the Tigers were keenly aware of Spring-Ford’s ball screens and tried to double off the screener to cut off driving lanes.

Olsen, who had a 15-point night to cap a stellar career at Spring-Ford, noted the North Allegheny strategy took the Rams out of what they wanted to do.

“I think our offensive game wasn’t there,” Olsen said. “I’m not sure if it was all because of them, they definitely played well but we also go a little flustered. We definitely could have played better.”

Tiffan kept the Rams in it thanks to her 3-point shooting early with the Bloomsburg recruit hitting 3-of-5 from behind the arc in the first half for 11 points at intermission. But with the lane either cut off or filled by North Allegheny’s 6-foot-1 senior Lousiville volleyball recruit Paige Morningstar, Spring-Ford had to put up more shots from outside.

The looks were there, but the makes were not. Spring-Ford hit on just six of its 29 attempts from 3-point range.

“I think we took good shots but they trapped a lot,” Tiffan said. “We worked on that in practice but I think we were a little nervous from the start and then we played well in the second quarter. We needed to get to the rim more.”

All season, the Rams have shown an ability to take a shot, recover and give one right back. North Allegheny didn’t get to Hershey without that ability either and the Tigers had a knack for answering every time Spring-Ford started to get something going.

Groetsch’s foul trouble defined the first half and Olsen’s was the tale of the third quarter. The Rams senior was hit with two whistles, the second coming on an offensive foul with 6:34 left in the frame, to give her three fouls less than 90 seconds into the half and putting her on the bench.

North Allegheny responded with a 6-0 run and after Olsen returned to spark a run that got the Rams within 32-29, the Tigers replied again with six unanswered, the last coming off a layup by Groetsch.

“(North Allegheny) did answer the call, we had a couple times where we put a few baskets together and they answered,” S-F coach Mickey McDaniel said. “We couldn’t string enough baskets together to have the kind of runs we can make. All year, we’ve had ups and we’ve had downs but when we went down, we got back up.

“We didn’t stay down, we got back up but we couldn’t connect on our shots.”

Olsen noted she didn’t want to put herself in further trouble on another offensive foul and that changed how the Rams looked to attack offensively in the second half.

“Any time she came off a ball screen, we wanted to double her,” Groetsch said. “It helped when she picked up some fouls but she’s a great player. Our team defense was great.”

Groetsch found Morningstar in the corner for a three to open the fourth that gave NA its first double-digit lead which the Tigers extended on a 10-3 run with five minutes to play. Spring-Ford got within nine on a free throw by Olsen with 1:10 to go, but the Tigers closed out their state title at the foul line.

“I was happy we finally got to the state championship at the end of our four years, that was always the goal,” Tiffan said. “We wish we could have won, but getting here was still exciting.”

While the Rams returned to Hershey for the first time since 2014, they had to return home without the prize they went there to get.

“I think I have more of a sour feeling now that we lost,” Olsen said. “When we first got out there, it was pretty cool, but I just wanted to win. Unfortunately we didn’t get it.