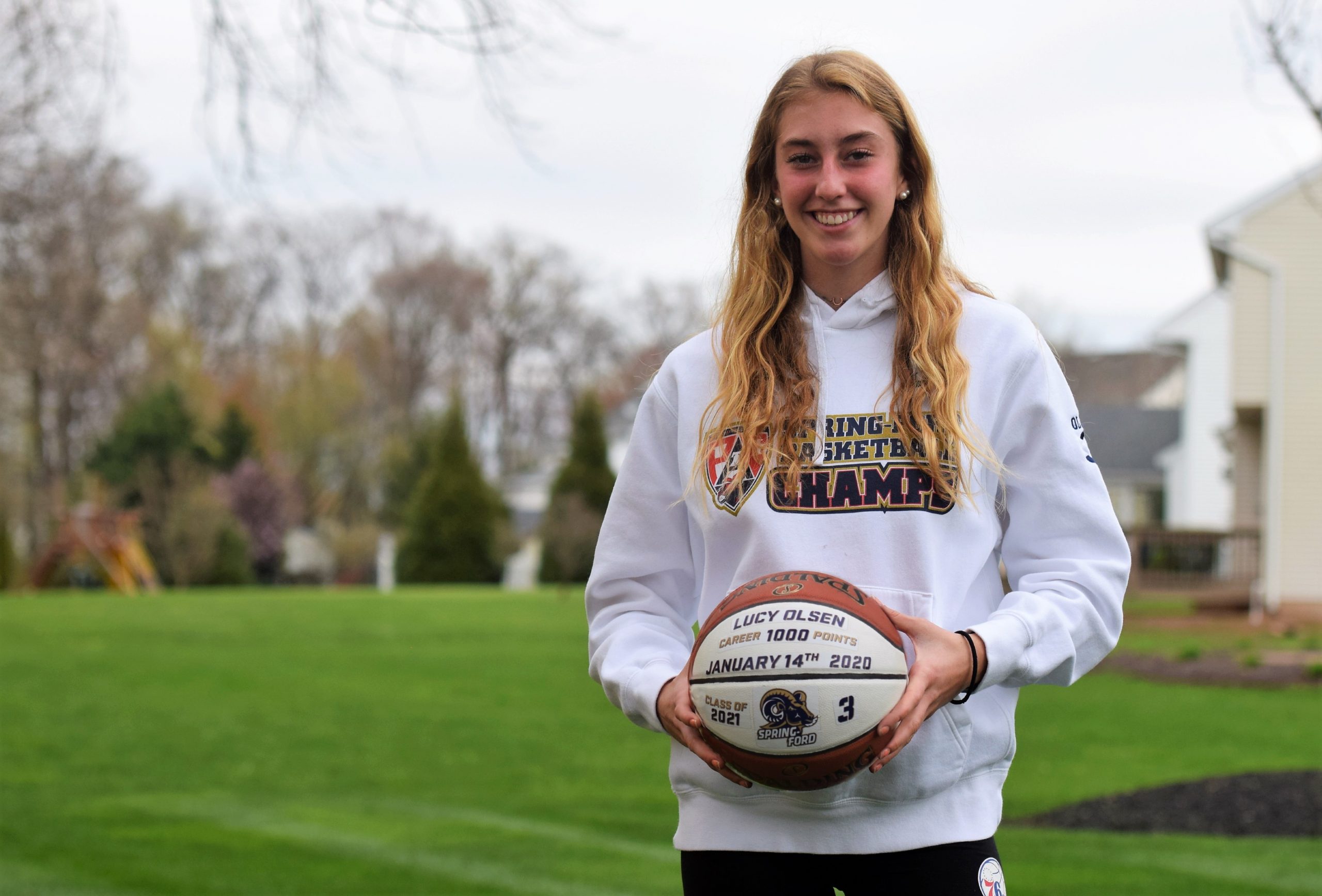 Like nearly every basketball-loving family in the country, The Last Dance was appointment viewing for the Olsen family in April and May 2020.

The 10-part documentary on the Michael Jordan-era Chicago Bulls and its push to the finish of a sixth NBA championship captured audiences far and wide.

“I loved The Last Dance,” Olsen said. “Watching every part of it, I was amazed.”

Though the Spring-Ford then-junior didn’t immediately set out to emulate the legendary competitive streak of Jordan, there is a trait in Olsen that mirrors the NBA legend.

“I don’t think I was like him in that I tried to make everything personal, but I just hate losing,” she said. “Especially when I play bad, my first thought is, ‘Let’s have a rematch. I want to try again.’”

What loomed at year’s end was Olsen’s senior season, the end of rematch opportunities and extra chances.

It was her Last Dance.

Everything about Olsen this winter made sure the chance wasn’t wasted.

“I had extra motivation this year. Going into freshman year I told Coach (Mickey) McDaniel that I wanted two PAC championships, a district ‘chip and a state championship. Those were my goals for my high school career,” Olsen said, recalling the little, skinny girl with big aspirations before ever playing a varsity minute.

“We already had three PACs going into senior year. We only had one more year, but we could do it.”

Already an All-State first team selection as a junior, Olsen wrote the final chapter on one of the great basketball careers in area history by leading Spring-Ford to a fourth straight Pioneer Athletic Conference championship, the District 1 Class 6A championship and a runner-up finish in the PIAA 6A Championships, one win short of the lofty goals she set four years earlier.

While averaging a PAC-best 19.4 points per game and team bests in rebounds (6.0) and assists (4.9), it was a season and career of sweeping success for both the 24-1 Rams and Olsen, who is in rare air as a three-time Mercury All-Area Player of the Year.

“Having success makes me want to work harder,” Olsen said. “I’m able to see all my hard work is actually becoming something. When I do hit these records and have success, it just pushes me forward. I don’t get to a point where I feel I’ve succeeded and I’m done, it’s ‘I succeeded, it felt great, and now I want more.”

The Villanova recruit’s name will also rank atop Spring-Ford’s career charts in many categories, including assists, her 379 ahead of past great Sammy Stipa’s 333. She’s also the top rebounding guard with 574 in her career after leading S-F in the category the last two seasons.

Spring-Ford went 96-17 over the past four years while having its best season since its back-to-back state championship appearances in 2013 and 2014 in a year Olsen and classmates Emily Tiffan (All-Area first team) and Abbey Boyer (second team) were seniors.

Olsen’s legacy will be rooted in her passion and competitiveness.

“Her competitive fire had a major impact in the program and that was contagious,” said head coach Mickey McDaniel. “You can talk about her scoring all the points she did, but to me the biggest impact was intangible.

“Of the past great players, Stipa’s biggest impact in the program was her leadership and everything was a byproduct of that. Megan Bedard’s was her grit. Lucy’s greatest impact and the legacy she’s leaving behind is her passion, work ethic and desire to win and to make herself and the team be the best it could be.”

After becoming the first team to win four straight PAC titles, Spring-Ford broke through at the district level after three seasons of semifinal heartbreak and parlayed it into a district championship win over Plymouth Whitemarsh, victory in the PIAA semifinals over Nazareth and trip to Hershey where it was denied an undefeated season by North Allegheny.

The past letdowns in districts and three straight early exits from the PIAA tournament informed Olsen’s determination this winter.

“I had a conversation with myself, ‘This is the year to step up. You don’t have a next year,’” Olsen said. “I think I put it out there in the beginning of the year, you’d better be on board because we’re winning this year and we don’t have time to waste.”

Olsen’s competitive streak has been around since she was a toddler.

That competitiveness was necessary throughout her youth basketball career when she was always the smallest player on the floor while playing a year up in AAU.

“Being tiny definitely helped me in the long run. I had to find ways to be a good player without having height or strength,” Lucy Olsen said. “You have to work extra hard. Nothing’s given to you and you have to bring the extra effort if I did want to play. I could have just sat there and said, ‘Oh, I’m too tiny to play,’ but instead I wanted to play and do the extra stuff.”

Only entering her freshman year did Olsen sprout from 5-0 to 5-7 on the way to the 5-10 future Division I player she is today.

Along with getting as many games as possible playing with AAU Lady Runnin’ Rebels and with Spring-Ford teammates in a fall league, strength training was an offseason focus for Olsen.

“In the gym working out, it was her against gravity, her against the weights,” said Roland Olsen, Lucy’s father. “Whatever was in her mind from a poster standpoint when she got up early in the morning, something was motivating her. It was a lot of things but most of it was that she didn’t want to lose another game ever, to anybody.”

There’s the cerebral side of the game that she also soaks up.

“She’s a student of the game within the game. Everybody sees her show up and play and it’s, ‘Lucy, she’s great. She’s a natural.’ She puts a lot of thought and effort into it,” Roland Olsen said. “When she gets home (from a game) she’s hoping the video is uploaded so she can watch it a couple times.”

She’s a top student in the classroom, too. Olsen is a National Honor Society student and was named to the PAC All-Academic team this winter.

Spring-Ford’s Emily Tiffan (11), Anna Azzara (4) and Lucy Olsen (3) smile with one another out a timeout during their district semifinal win over Upper Dublin. (Austin Hertzog – MediaNews Group)

Lucy Olsen was thrust into the unusual position of being the best player on the team since her rookie season with Spring-Ford  – she’s a four-time All-Area first teamer – and endured the challenges of leadership expectations before being ready for them.

Olsen consistently credited the addition of freshmen guard Anna Azzara and forward Mac Pettinelli, who both played crunch time minutes in the Rams’ playoff run, with helping Spring-Ford get over the top this winter.

From the rookies’ perspective, having the confidence of the star player was massive.

“She’s always trying to be the best player she can be and to always help other girls’ out,” Pettinelli said of Olsen. “In the beginning when me and Anna were first getting to practice, she was always looking to help us. In games if we were not doing as well she would always encourage us and tell us we’re doing good.

“Her leadership is outstanding. She’s the definition of a player you would want to be.”

It all amounted to a charmed run despite the COVID-19 pandemic-altered season that resulted in a delayed start and league-only play to begin the regular season. Yet the Spring-Ford girls experienced no shutdowns and did not have a game postponed by an opponent’s shutdown. In the process, Olsen overtook 2014 grad and two-time Mercury Player of the Year Stipa’s scoring record (1,366) on Jan. 25 and clinched a fourth straight PAC crown with a Feb. 13 win over Perkiomen Valley.

Spring-Ford’s District 1 playoff run was catapulted by its long-sought semifinal breakthrough and then backed up in the championship against No. 2 Plymouth Whitemarsh, a team that dealt the Rams their worst defeat in 2019-20. Olsen put on one of the great performances in PAC history with a Rams’ record-tying 33 points in a 52-36 takedown of the Colonials.

“I hate losing. That’s why against PW I was so into it because we lost to them last year and we should not have lost to them that badly. I needed some revenge,” Olsen said. “I think that really helped me in the PW game and gave me that extra spark.”

Lucy Olsen with 18 including this late 3. An incredible first half by the senior pic.twitter.com/JFCf4DhwAj

Olsen scored 20 and had a game-ending block to seal a 46-43 win over District 11 champion Nazareth on March 22 to earn a trip to Hershey. But the Rams met their match against North Allegheny and Penn commit Lizzy Groetsch in the Tigers’ 55-40 state championship victory.

“The first thing she said to me after coming off the court was, ‘I can’t wait to play Penn,’” said Roland Olsen.

Along with her competitiveness, her love for basketball will also define Olsen’s Spring-Ford legacy.

“It’s never been about wanting to be better than anyone, it’s just that I love the game so much,” Olsen said. “I’ve always thought it’s fun to practice, and I still do.”

“I’ve never seen anyone love the game as much as she does,” said Kelley Olsen. “It sounds corny, but she is so pure of heart in her love of the game. That’s all she wants, to constantly play and better herself.”

With her illustrious high school career complete, Olsen is happy with its success, but is intent on making sure the best is yet to come.