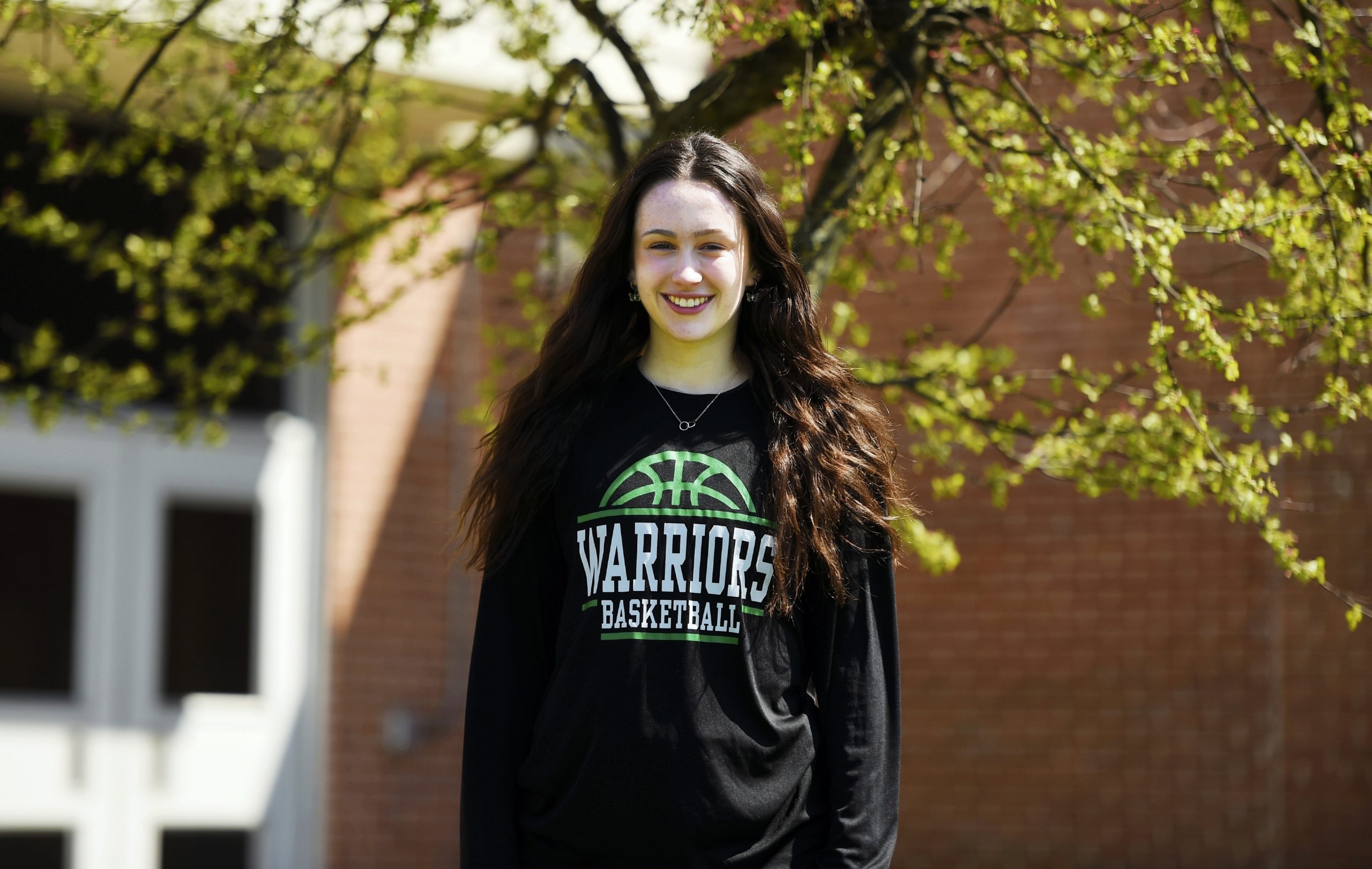 When you arrive like Nicole Timko did, it was always going to be noisy.

From the moment she stepped foot on court for the Methacton girls basketball team as a freshman she was a standout player. How many players score 18 points in their rookie debut?

As the weeks and years progressed to this past winter, her senior year, the noise around Timko grew to be the player opposing teams built their game plans around and the person the Warriors built their greatest aspirations around.

Yet through all the baskets, the spotlight, the wins and the losses, there was irony: the noise inside and outside the even-keeled, pleasant Timko never matched.

“I feel like I’ve always been more of a ‘silent but deadly’ player,” she said. “I keep my composure very well usually. I’d say I’m like that in other areas as well.”

Timko has every reason to feel composed on a basketball court: her skill and knowledge extend beyond her years.

The 5-9 guard will go down as the Pioneer Athletic Conference’s greatest shooter and the league’s No. 2 all-time leading scorer – 1,748 points in her career – after a senior season where she averaged 18.8 points per game while leading Methacton to a 24-5 record and the program’s first state playoff victory since 2008.

She will also go down as the Mercury All-Area Girls Basketball Player of the Year for the 2021-22 season.

“When she was a freshman coming into the program and she was playing with us in the fall leagues, we knew she was going to something special over the next four years,” said Methacton head coach Craig Kaminski.

Kaminski, who coached his 20th season for Methacton this winter, didn’t just have a star-level player in Timko, but a star-level teammate who put the team above her own accolades, he said.

“She had an outstanding senior year. She was our go-to player, our leader; we always relied on her,” Kaminski said. “I know she did a lot of scoring, but people don’t realize she was also our assists leader. She was sharing the ball and getting others involved. She’s never been that type of player that is all about herself. She was all about ‘team’. Winning, the team and the program came first. Everything she accomplished always came second.”

Aside from scoring, Timko was also Methacton’s leader in assists (3.8 per game) and steals (2.3 per game) while averaging better than five rebounds per outing (5.1).

It’s hard not to get wrapped up in her scoring though: you’ll rarely see a player with as perfect shooting form as Timko.

It runs in the family, as does the player of the year award. Brother Erik took home the award in 2020 after leading the dominant Methacton boys team to PAC and District 1 championships.

Erik Timko moved on to Thomas Jefferson University, playing for recently-retired legend Herb Magee, and was selected Central Atlantic Collegiate Conference First Team and Rookie of the Year this winter.

Father Tim Timko, who played at Ursinus College, passed his love of basketball on to his children and guided them from an early age on dedication to their shooting form.

Their success is a product of years of practice and refining the early instruction.

“I’ve learned a lot from my brother and dad. Especially with my brother being such a good shooter as well,” Nicole Timko said. “Watching my brother play when we were young, I’ve always been able to practice the next steps at a higher level because I was watching him and saying, ‘I want to do that.’ And then he or my dad would help me.”

That tutelage got even better in the past two years with Erik playing at the college level at Jefferson. He brought home several college-level drills to pass along to little sister, and the results were obvious this winter.

Weightlifting and strength training became a focus after her junior year.

Added all up, the Methacton coaches found themselves wowed by her shooting range this winter.

“When we’re warming up an hour or two before a game, she is shooting NBA 3-pointers one-handed, nothing but net. It’s crazy, her form,” said Kaminski. “(Assistant coach Kevin Kaminski) and I, we’re just looking and it’s beyond NBA range. We’d be shooting air balls! She has such great form.”

But beyond an enticing Steph Curry-like pregame routine, the upgrades diversified what Timko brought to the table in a year where she was going to targeted by all opposition.

“Her shooting range improved dramatically, how far out she could shoot when open. The other thing was how she really started to learn how to read the defense, how to create shots and how to get herself open,” Kaminski said. “She wasn’t always going to be open, teams were going to double-team her, so reading the defense to get better looks.”

Methacton, led by Timko and All-Area second team picks Cassidy Kropp and Mairi Smith, was the preseason favorite in the PAC and lived up to the billing in a 20-2 regular season that included two wins over eventual District 1 runner-up Spring-Ford. In the first meeting on Jan. 11, Timko scored a career-high 36 points on 10-for-12 shooting with her entire scoring prowess on display.

Spring-Ford was Methacton’s key nemesis throughout her high school career and the Rams were the foil again, upsetting the Warriors in the PAC semifinals and denying Timko and her team their first PAC championship.

The Warriors let the disappointment linger and suffered back-to-back losses for the only time of their season after being upset by Garnet Valley as the No. 3 seed in the second round of the District 1-6A playoffs.

Methacton faced a do-or-die district playback game next against West Chester Rustin, one of only two teams to top them in the regular season.

“We were in a tough part of our season because we kept losing (back-to-back losses) and we just needed to win that one game to get to states so I think it was a big moment for how we were able to come together,” said Timko, “and we played pretty well. That will always stand out to me.”

Timko stuffed the statsheet with 16 points, 10 rebounds, six assists and four steals while leading Methacton to a 45-43 win to earn a second state playoff berth in three seasons.

A game later, a 56-27 rout of Neshaminy in a seeding game, all eyes were on Timko when she became Methacton’s all-time leading scorer, passing 2008 graduate Renee Womack’s 1,692 career points.

“I came into my high school career wanting to get on the 1,000 points list. Probably the start of my junior year and I knew I would be able to reach 1,000 points; then I started to look toward the next goal, which would be to break the (school) record,” Timko said. “I feel like it’s a really good accomplishment and I’m proud to be able to be there. It shows the hard work I put in the past years.”

Methacton entered the state tournament as District 1’s No. 9 seed and opened on the road at District 2 champion Wilkes-Barre.

Timko’s excellence was on full display with 26 points in a 56-44 victory, the Warriors’ first state playoff win since 2008.

“The whole season we were looking for something that would put our name in the record books in some way so to be able to be one of the few teams in Methacton’s girls basketball history to win a state game was a good accomplishment for us to have,” Timko said.

Next round’s 38-31 defeat to neighbor Perkiomen Valley proved to be a career-ender for Timko.

She’ll be off to Division III powerhouse Christopher Newport in Newport News, Va., next year.

And Kaminski will be crossing his fingers that he can replace the irreplaceable.

“She’s a very unique and special person and player,” Kaminski said. “We knew we had something special. She definitely will be missed. A Nicole Timko doesn’t come into your program every year.”