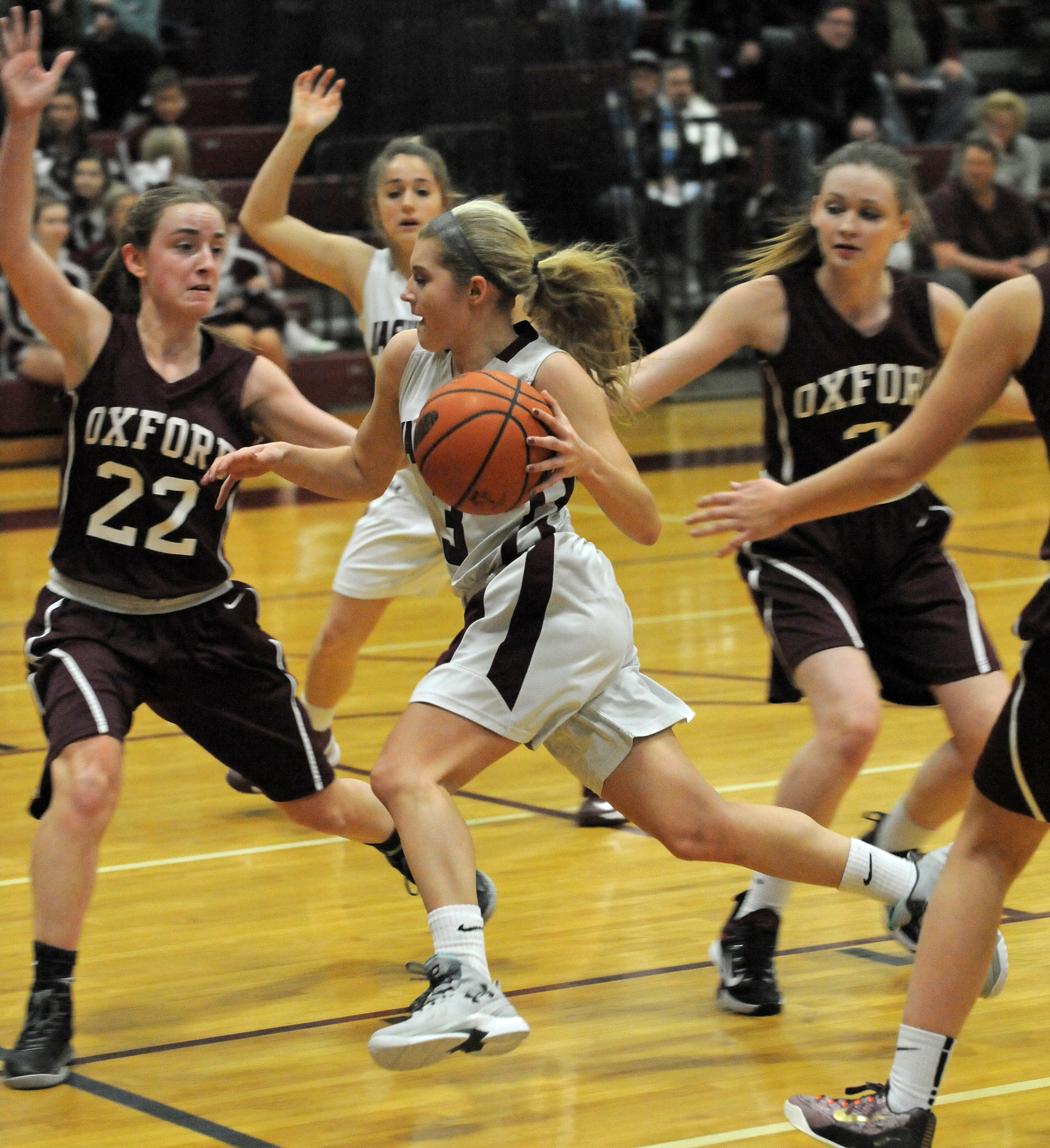 CONCORD >> Projecting what kind of player Emily McAteer will be two or three years from now is an exciting thought.

The Garnet Valley freshman is already an impact player. With good size, a smooth shot and evolving ball-handling skills, McAteer has the potential to be something special.

Perhaps, when it’s all said and done, McAteer will be considered the best girls basketball talent to come out of Garnet Valley.  There’s still a long ways to go, but her freshman campaign has been nothing short of impressive. Alongside fellow freshman forward Brianne Borcky, the Jags’ future is bright.

“I can’t wait to see them in four years. They’re phenomenal,” said senior guard Emily Mathewson, who is an All-Delco and All-American lacrosse player.  “They play so well together, they complement each other and they make us work better. When you have great girls under you, it makes it so much better.”

Friday night was McAteer’s show. She poured in a career-high 28 points, grabbed 12 rebounds and blocked five shots to lead the No. 3 Jaguars to a 60-45 victory over an impressive 30th-seeded Oxford team in the opening round of the District One Class AAAA tournament.

Garnet Valley advances to the second round to play the winner of Saturday’s game between No. 19 Plymouth-Whitemarsh and No. 14 Spring-Ford.

McAteer eclipsed the 300-point plateau for the season and is averaging 12.5 points per game. She scored nine first-quarter points and hit her first five field goals. In the fourth quarter, when the Hornets (13-10) pulled within five points on the strength of two Hannah Bahls 3-point baskets, McAteer took over with a steal and a layup. She scored 12 of her 28 points in the final quarter and was 4-for-5 at the foul line down the stretch.

McAteer is developing a terrifying transition game, which was on display Friday. For her first postseason game, the freshman sensation was excellent.

“I wasn’t really nervous — I just wanted us to win,” said McAteer, who was 11-of-17 from the floor. “I’m getting more comfortable (dribbling the ball), but I like being lower. They try to put me in the low post if there’s a mismatch.”

The Jags significantly outplayed the Hornets in the opening minutes, scoring the game’s first seven points. The lead ballooned to 13-3 before Oxford settled in and began chipping away. The Hornets got within six points of the Jags with a 5-0 run to close the first quarter.

Mathewson came off the bench for starter Nicole Barnes and supplied valuable minutes throughout the game. She had six points on two 3s, including one in the fourth quarter to give the Jags some breathing room. Mathewson shared the team lead in steals with three.

“I get in there and try not to make a mistake,” said Mathewson, laughing. “It’s whatever I can do to help.”

Ultimately, the Jaguars wore down the Hornets with their fastbreak.

“We really ran the ball tonight. Our speed is a huge advantage,” said Mathewson. “Even our bigs can handle the ball, which is a huge plus.”

Miranda Porretta scored 22 points to pace the Hornets, who gave the heavily favored Jags everything they could handle.

“They gave it their all and left everything on the court,” Mathewson said. “You know, you can’t look at the seedings. Once the numbers are set, it really doesn’t matter anymore. They did show that against us.”