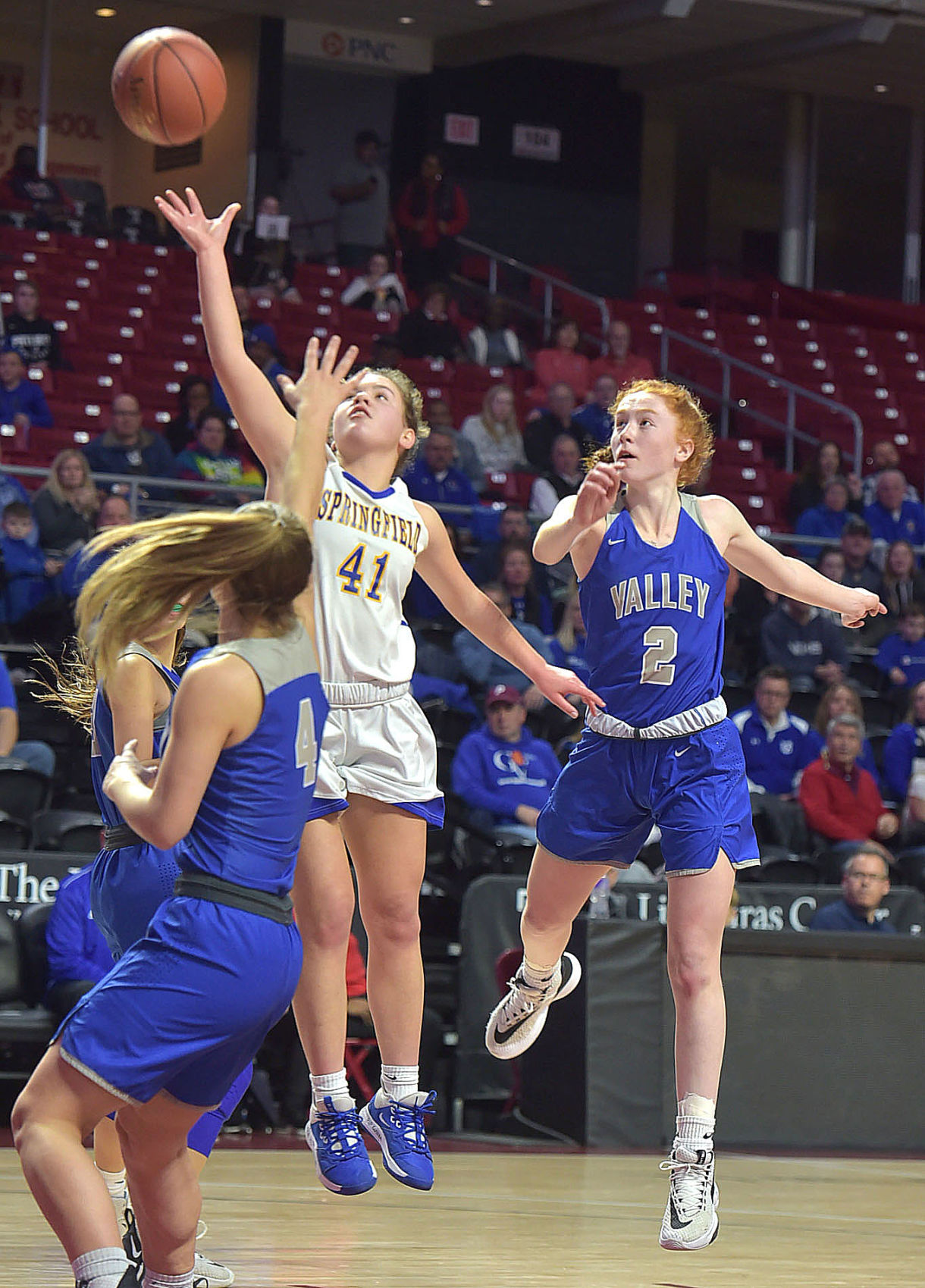 “This one to my left,” Ky McNichol said, pointing to Valerio, “is a game changer.”

“She can really turn the game around when she plays defense the way she did tonight,” McNichol said. “And she can cause a lot of teams to make mistakes with the ball.”

Valerio has emerged as one of the top all-around players in the Central League. She is an absolute pest on defense and makes smart choices when the ball is in her hands. She had a steal and a breakaway layup to thwart a Haverford rally in the fourth quarter. For the game, Valerio produced a very workmanlike stat line: nine points, four assists and four steals and a rebound.

Later in the fourth quarter, Valerio made a dish inside the paint to senior guard Alexa Abbonizio, who was fouled en route to a basket. Abbonizio (10 points) hit the free throw to give the undefeated Cougars a double-digit lead, which essentially sealed their victory.

Valerio was a sixth man off the bench for last year’s Springfield team that won the District 1 Class 5A championship. She had a memorable hustle play in the game at Temple University which helped the Cougars put away Great Valley. She’s been a relentless hustler and defender in high school.

“I know that, at the end of the game, most of it comes down to defense,” Valerio said. “I know that defense wins championships, so I think I need to do whatever I can to help my team win. And I know we have strong shooters and we have strong (offensive) players, like (sophomore) Anabel Kreydt, who can take the ball to the basket every single time and finish. If we have all that going with our offense, I think my defense is enough to help us win.”

Her scoring is a bonus, and Valerio wasn’t alone Tuesday. The Cougars were very balanced on the offensive end, led by senior co-captain Rachel Conran, who produced a game-high 13 points, two assists and a pair of steals. Conran hit four foul shots down the stretch in the final period, but she was counting her blessings just to be on the floor in crunch time. In the third quarter, Conran, a four-year varsity starter, landed awkwardly after attempting a 3-pointer and writhed in pain on the floor. After receiving medical treatment on the bench, Conran returned to the floor before the end of the third quarter and seemed good as new.

“It was more a scare, but I’m just glad I was OK and I was able to come back in for the fourth quarter,” she said.

Conran was proud, but certainly not surprised, to see Valerio make such a big impact. Meanwhile, Kreydt was excellent while defending 6-1 sophomore Caroline Dotsey, who was held to eight points.

“Since freshman year, they’ve been great. Their defense brings us more offense,” Conran said. “And I think that’s been the key for us this year. We haven’t shot great as a team and, you know, when these three sophomores (Valerio, Kreydt and Lesi Aaron) get up and are playing their tails off, it’s just giving us good offense and turning the game around.”

Haverford tried to battle back in the fourth quarter after trailing by 14 points through three. Mollie Carpenter made a putback and Dotsey scored a layup to cut the Springfield lead to seven points midway through the quarter. The Fords’ press defense also forced Springfield to make some bad decisions, but eventually the Fords couldn’t do anything except foul and send the Cougars to the free-throw line, where they shot 9-for-14 in the fourth quarter.

“All you need to do is … make a smart, good pass and they’re going to come foul you,” McNichol said. “If we put the ball into the hands of this one right here, our senior leader (Conran), she knows what to do.”

In the other Central League semifinal: