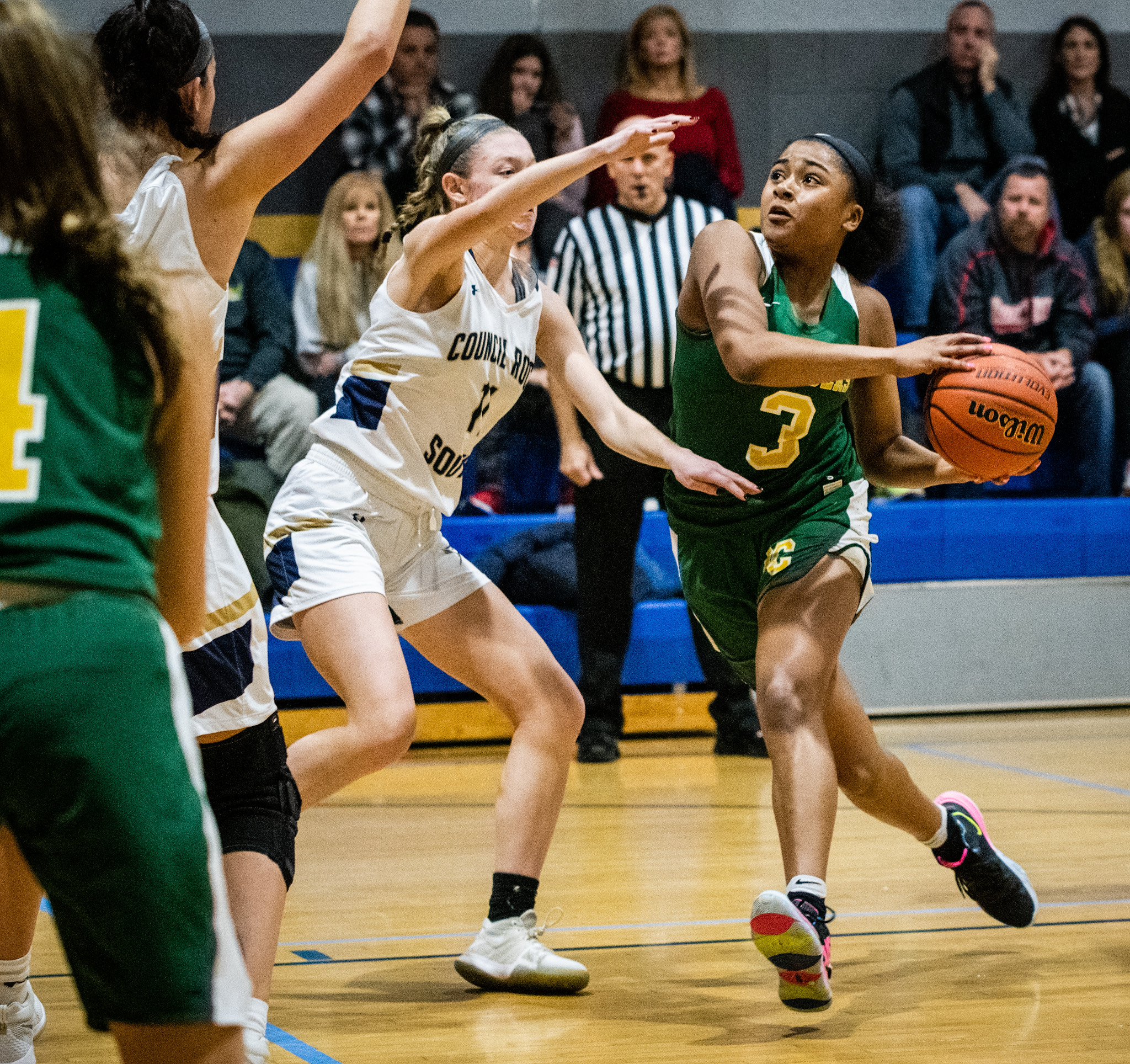 The Lansdale Catholic girls basketball program asked a lot of Timaya Lewis-Eutsey this season but the junior more than responded.

Changing positions, altering her style of play and stacking more responsibilities on her shoulders didn’t slow Lewis-Eutsey in the slightest, as she and her teammates responded with a terrific season. That work also didn’t go unnoticed outside of the local bubble either.

“I was very excited, that’s always in the back of your mind but to go out and reach that goal feels great,” Lewis-Eutsey said. “It’s nothing but reassuring that everything I’m doing is paying off.”

Jaye Haynes had already put herself on the map at the state level last year, but the Germantown Academy senior erased any lingering doubts about her abilities this season.

On several occasions this year, the Patriots wing went up against a well-regarded opponent and proved she more than belonged. Haynes’ effort, which came with an improved offensive game, only re-affirmed her spot as she repeated as a first team all-state pick on the Class 3A squad released Tuesday.

“It’s a blessing and such a great accomplishment to make an all-state team again,” Haynes said. “These are the best players in the state, doing it my sophomore year was a big accomplishment but to go first team back-to-back my junior and senior year really meant a lot to me.”

Haynes, who is heading to La Salle to continue her career, is now a three-time all-state selection. She earned third team honors as a sophomore before jumping to the first team as a junior. This past season, she posted a 16.7 points per game average and was named the Inter-Ac MVP as GA went through another undefeated league season.

An athletic slasher, Haynes’ shooting steadily improved over her time at GA and she hit a solid 35 percent from behind the line to widen her offensive skills. She departs GA with 1,440 career points.

The highlight performance of the season for Haynes came when she dueled with 3A state player of the year Diamond Johnson of Neumann-Goretti. While the Saints won, Haynes scored a game-high 39 points and went score-for-score with the Rutgers recruit.

“I think it’s a gift and a curse, I do play my hardest against teams I know are better and have the known players because I think it’s the adrenaline and the fact I want to prove myself,” Haynes said. “I want to show I can compete with the best and that’s how it’s going to be in college. It’s also a curse because when we played teams that weren’t as strong, I would tend to play down to my competition which is something I need to work on and can control.”

Germantown Academys Maddie Vizza (3) brings the ball down the court through Archbishop Wood defenders in a game at Jefferson University. (James Beaver/MediaNews Group)

A Northeastern recruit, Vizza was content to play the role of distributor. However, when injuries robbed forward Elle Stauffer, a third team all-state pick last season, of most of her senior year, Vizza stepped up and increased her scoring and playmaking, dishing 88 assists on the year.

“Maddie making it was huge, she’s an amazing player and really deserves everything,” Haynes said. “Being able to put my name up there with people like Maggie (Lucas), who I think made first team all four years of her career, it’s something I worked for and it was a goal of mine to be consistent and make my own name at GA.”

Haynes has signed with La Salle and she’s eager to try and make her name again at the next level with an Explorers program looking to build a new winning culture. Haynes’ father Jonathan had stellar career at Villanova, so Jaye is also looking forward to playing in the Big Five like he did.

“That’s the biggest thing for me, to put my name out there and not just be Jon Haynes’ daughter,” Haynes said. “I want people to say ‘they were a really good pair, Jon and Jaye.’”

St. Basil Academy has been one of the top programs in the state for more than a decade and the Panthers have routinely been represented on the all-state team. That’s no different this year as junior forward Denae Carter makes her first appearance with a second team selection in Class 3A.

Carter, who was named the AACA’s MVP, averaged 13 ppg, seven rebounds, two assists and two blocks per contest for the AACA and District 1 champion Panthers. A lethal transition player who can also shoot the ball, Carter scored her 1,000th point late in the season and has collected a handful of Division I offers already.

Lewis-Eutsey has usually played as a guard but when a couple of injuries hit LC’s frontcourt, the coaches asked her to fill in as a forward. She took it as a challenge and quickly found a way to put her athleticism, energy and toughness to use.

Her ability to hit the glass hard led to plenty of second-chance opportunities and Lewis-Eutsey parlayed that into a lot of trips to the foul line. Her numbers speak loud, as the junior averaged 24.2 ppg on 49 percent shooting.

“I think any position my coaches put me in, I’ll do everything I can to be great for my team, I’m not focusing on the accolades but leading my team as far as possible,” Lewis-Eutsey said. “I learned I can really deal with adversity. Whatever comes my way, I’m going to play the hand I was dealt and do my best in whatever position my coach puts me in.”

LC went 20-2 during the regular season and won the PCL Blue division title. Lewis-Eutsey posted strong all-around numbers, adding 9.2 rebounds, 2.9 assists, 4.3 steals and 1.9 blocks per game to her scoring as the Crusaders went on to capture a District 12 4A title and were in the state quarterfinals when the PIAA cancelled the remainder of the season.

Lewis-Eutsey said she was a little surprised her first all-state selection came on the first team but added it’s only more drive for her to keep improving and hold that spot as a senior.

“I just want to work harder, I want to go further next year,” Lewis-Eutsey said. “I want to win it all, so this motivates me to be ready to get back out there, work even harder and go after everything I want to do.”