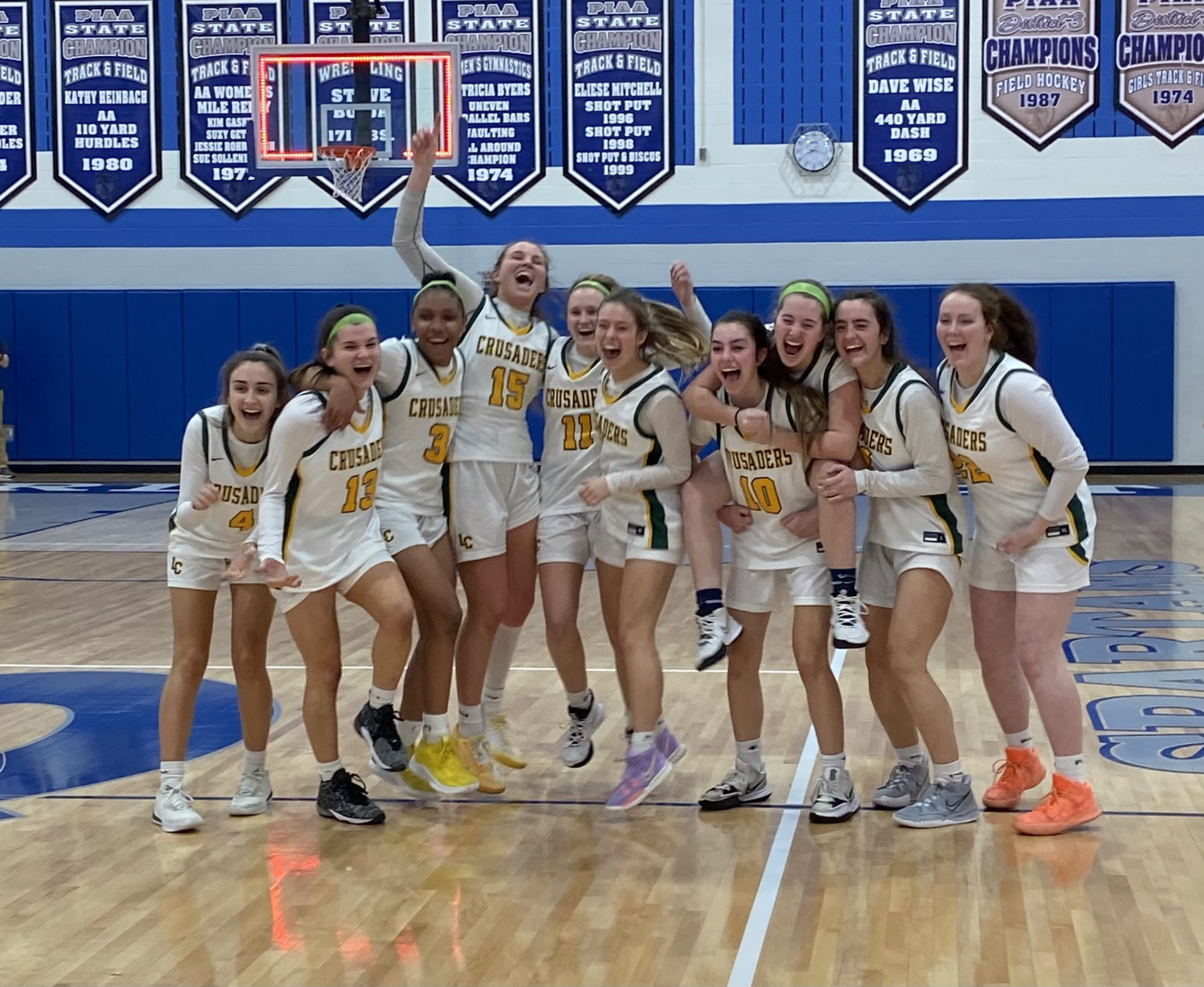 NEW HOLLAND >> Needing one more defensive stop in the fourth quarter’s final seconds, Gabby Casey darted into the passing lane and seized it for the Lansdale Catholic girls basketball team.

“It kind of just anticipated it and I saw the girl looking and I just went for it,” Casey said. “Thankfully I got it.”

With the Crusaders holding a slim 39-36 lead over Delone Catholic late in Wednesday night’s PIAA-4A quarterfinal, Casey secured a steal near the sideline and was fouled with 4.3 seconds remaining.

The junior hit the second of two free throws and shortly after LC was storming the court in celebration, reaching the tournament’s final four with a 40-36 victory over the District 3 champ Squirettes at Garden Spot High School.

“Give all credit to Delone Catholic but I think our defense really stepped it up tonight,” Casey said. “Sanyiah (Littlejohn) and Nadia (Yemola) were really key in the Triangle-and-2, shutting those two girls (Giana Hoddinott and Makenna Mummert) down so they were really key tonight. And I just think all-around team effort, equal scoring and I think that’s what really pushed us to get the dub.”

Olivia Boccella made four 3-pointers in scoring a team-high 13 points, Casey collected eight of her 12 points in the third quarter while Lauren Edwards added 10 points as the Crusaders advance to face District 10 champ Villa Maria – a 54-27 winner over District 7 champ Blackhawk – the semifinals Saturday at a site and time to be announced.

Saturday’s winner takes on either Archbishop Wood or Jim Thorpe in the state title game Thursday, March 24 at the Giant Center in Hershey.

“It feels great, especially playing them earlier in the season and getting the loss and being able to adjust, and come back and shock them a little bit,” LC senior Lauren Edwards said. “And show them that we can hang with them was really key.”

Two seasons ago, Lansdale Catholic (18-7) got to the same round of eight but never got a chance to reach the semis as its quarterfinal matchup with Bonner & Prendergast as well as the rest of the PIAA playoffs were cancelled due to the COVID-19 pandemic.

“It’s not just about me it’s about the team making a statement, showing them that we can overcome adversity,” Edwards said. “And we’re able to kind of shock people a little bit with the tough schedule we had and making it here when I lot of people thought we wouldn’t. And just the group of girls was so amazing, I couldn’t ask for a better group.”

GIRLS #BASKETBALL: @lcladycrusaders’s @_gabbycasey jumps into the passing lane for a steal then gets fouled with 4.3 seconds left 4Q with LC leading Delone Catholic 39-36. pic.twitter.com/Hi28xeLsxT

Mummert scored seven of her game-high 17 points in the fourth while Hoddinott hit three 3-pointers in the first half as she finished with 13 points for Delone Catholic (28-2), which was looking to reach the state semis for the second straight season and the third time in the past four years.

“Look, I don’t care who you are, if you don’t know basketball, if you look up at the scoreboard you see a team has 19 points and all 19 are from two players, right, you’re going to make adjustments,” LC coach Eric Gidney said. “So we made that adjustment. We had already talked about running some junk (defense), I think it frustrated them. They probably went into the locker room for eight, nine, 10 minutes, made adjustments for it and then we came out in the third quarter and didn’t run it.”

Lansdale Catholic lost to the Squirettes 54-48 Dec. 28 in the Boyertown Christmas Tournament final but in Wednesday’s rematch the Crusaders never trailed after scoring the first seven points of the first quarter to erase a 19-18 halftime deficit.

A Casey 3-pointer had the Crusaders up 28-23 entering the fourth with LC going up six three times in the last quarter but down the stretch struggled against Delone Catholic’s press.

“Sometimes it’s not who’s going to make the big plays, it’s who’s going to play the most mistake-free basketball this time of year,” Gidney said. “And don’t get me wrong, we tried to make up for it there in the last two-and-a-half, 2:38 something like that, we certainly tried to make up for it but I think up until that point we played mistake-free basketball. We changed defenses, we kept them on their toes, we kept them guessing.”

An Emily McCann layup off her steal near mid-court had Delone Catholic within 37-36 and LC calling timeout at 44.7 seconds.

The Squirettes fouled Littlejohn with 32.8 seconds, sending the freshman to a line for a 1-and-1.  Her first shot hit the front of the rim then bounced a few times on the back of the iron before dropping. Littlejohn drained the second for a three-point lead.

“I was very confident,” Littlejohn said. “No pressure. Just do what we do in practice when we get on the baseline and shoot the free throws.”

Mummert was fouled going through the lane with 20.6 seconds but missed the front end of a 1-and-1. LC grabbed the rebound only for Delone Catholic to force a jump ball and regain possession at 15.8 remaining.

The Squirettes swung the ball around to 3-point arc to Hoddinott on the right wing but Casey closed out to force the Mount St. Mary’s commit to drive in and try a baseline jumper that was off-target. The rebound, however, went out of play and Delone Catholic still had the ball with 7.6 seconds to go.

The District 3 champs inbounded into the left corner but their next pass was stolen by Casey, who was fouled at 4.3 seconds. Casey was long on her first foul shot but hit the second for a two-possession game to seal LC’s place in the semifinals.

“The defense really stepped it up in the last couple seconds,” Casey said. “But yeah, it was definitely nerve-wracking just cause they were getting good looks but thankfully they missed some and they didn’t go in.”

After a Boccella 3-pointer to start the game’s scoring, Delone Catholic collected the next seven points. LC pulled even at 10 in the first quarter’s final minute on a Yemola basket before Hoddinott hit a shot in the lane. Casey, however, connected on a three before the buzzer to make it 13-12 Crusaders.

An Edwards jumper and Boccella’s third triple had Lansdale Catholic leading 18-12 but the Squirettes scored the last seven before the break – Hoddinott banking in a three then two baskets from Mummert for a 19-18 advantage at intermission.

After being held to three points in the first half, Casey found her offense in the third. She started the quarter hitting a jumper with an Edwards putback making it 22-19 LC. Casey then drained a three to put the Crusaders up four.

GIRLS #BASKETBALL: @lcladycrusaders’s @_gabbycasey drains a 3-pointer for a 28-23 lead at the end of the 3Q vs. Delone Catholic. pic.twitter.com/Ag5S9xYinq

A Mummert basket and two Abigael Vingsen free throws at 55.3 second had Delone Catholic down 25-23 before Casey swished a three and the Crusaders went to the fourth leading 28-23.

“I couldn’t really get a driving lane so I just had to try something different and shot it from the outside,” Casey said.

After LC missed the front end of a 1-and-1 at 1:28, McCann scored putting back her own miss then intercepted a pass and took it in for a layup to pull Delone Catholic within 37-36 in the final minute.