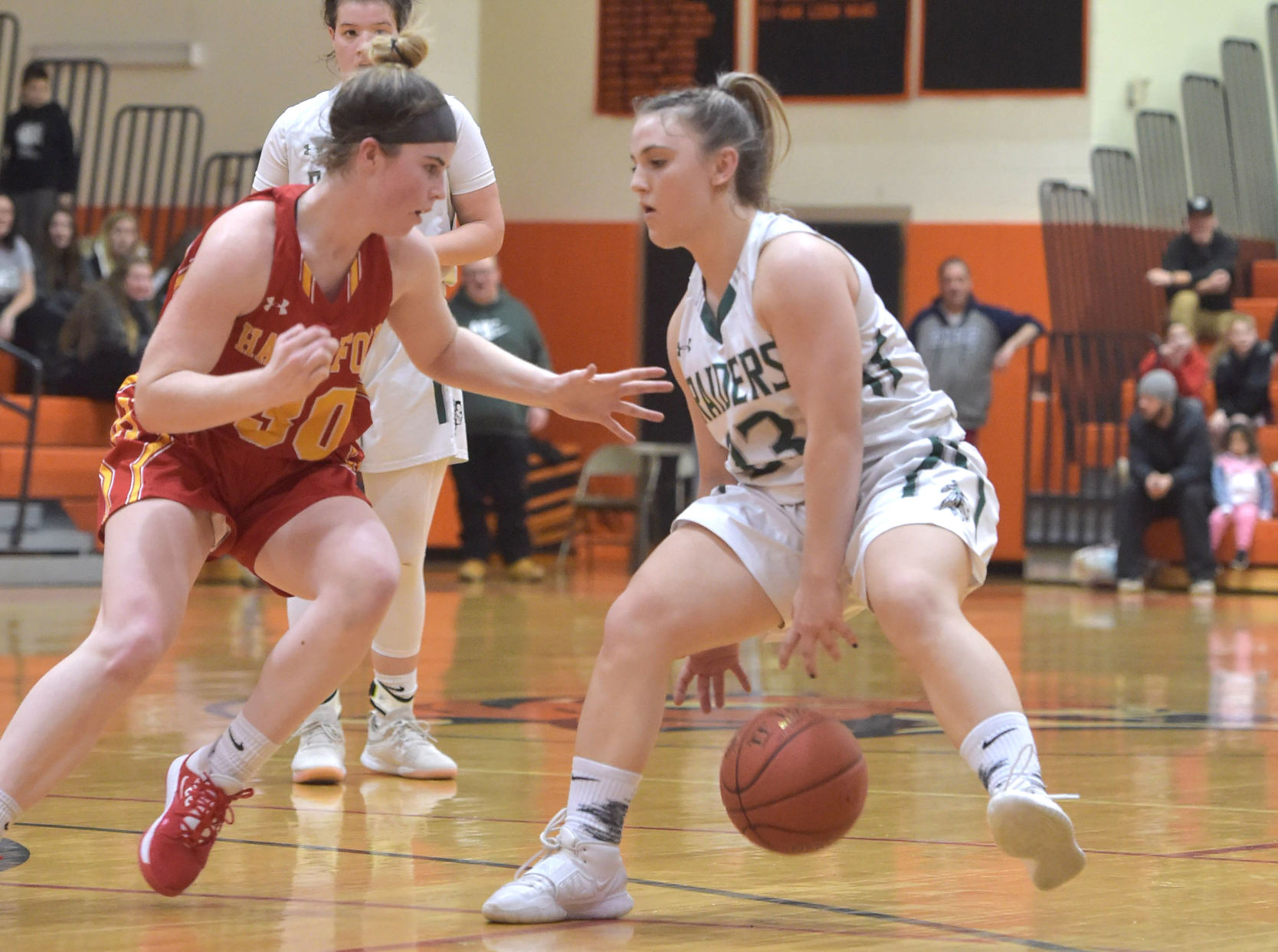 “I went to Amirah and I said, ‘Turn me up,'” said McCaughan, the Green Raiders’ electrifying senior point guard. “I felt like my shot wasn’t falling, so I knew that if I got them the ball, they were going to finish.”

In this case, McCaughan was referencing King and Madison Chapman, each of whom played a critical role coming off the bench in the Green Raiders’ 34-23 triumph.

It’s hard to imagine the Green Raiders having the opportunity to play for their first Central League title in more than a decade without the contributions of King and Chapman, who were excellent in the second half.

Prior to the game, King said she “made sure I ate a lot of carbs” and “brought a lot of energy.”

Ridley coach Roe Falcone had some advice after she heard of King’s pre-game meal.

“I told her, ‘Whatever it is that you ate today, eat it again for tomorrow,'” said Falcone, the Green Raiders’ first-year head coach who has guided the team to 19 wins after the program endured several losing seasons.

Chapman and King battled for rebounds, played tough defense and were the recipients of McCaughan’s sick-looking, behind-the-back passes for easy buckets in the fourth quarter. Ridley held Haverford (15-9) scoreless in the final period until the last 30 seconds.

“We focus on rebounding a lot and at the time we didn’t really see anyone crashing, so I knew I had to get in there and grab some boards,” said the junior Chapman, who collected four points, two rebounds and one steal in the fourth quarter.

King finished with four points, three rebounds and one steal.

“I knew I had to go in there and box out … and make sure I’m pushing her out,” King said, referring to nobody in particular on the Fords, although freshman forward Caroline Dotsey (eight points, five rebounds) gave the Green Raiders problems in the low post. “Dakota was always in my ear making sure that I was boxing out. … I just knew that, especially in the second half, we had to come out stronger.”

Haverford forced Ridley to play its methodical style of basketball. Good team and smart decisions on the offensive end have helped the Fords get this far, and they went into the locker room at the break up 15-13.

“We had trouble running our offense in the first half, and we were forcing and missing a lot of shots,” Falcone said.

McCaughan struggled to find her groove in the first half, going 0-for-6 with zero points. One of the top scorers in Delco — and the leading 3-point shooter with more than 70 treys — sparked the Green Raiders’ rally in the third quarter.

Haverford held a 19-14 advantage after baskets by Dotsey and Emma Rowland. Following a Ridley timeout, McCaughan banked a triple to cut the deficit to two points. Lindsay Boyd followed with a layup to even things up.

From there, Ridley was in control

“It can be anyone who steps up and tonight, it was the whole team,” said McCaughan, who dished out seven assists to go with her six points. “It was a whole team effort, I feel like everyone stepped up and did their jobs.”

Haverford was held to four points over the game’s final 12 minutes, 10 seconds. After they went up by five points with 4:50 left in the third quarter, the Fords shot 1 for 11 from the field and committed five turnovers.

“I just told them to settle in and take a deep breath,” Falcone said. “We needed a boost. Honestly, Madison has been doing it for us all year. She comes in and hustles and is all over the place on the floor. Amirah played really well the last time we played them, so I had the confidence that she could come in and give us great minutes.”

Ridley avenged its loss to Haverford last week. Up next is Springfield, the only other Central League team to hand the Green Raiders a defeat.

Springfield posted a 16-0 record in the Central League and disposed of sixth-seeded Harriton in the other semifinal Monday night.

McCaughan and the Green Raiders have revenge on their minds.

“Tonight was ‘redemption one’ and tomorrow we want it to be ‘redemption two,'” McCaughan said.