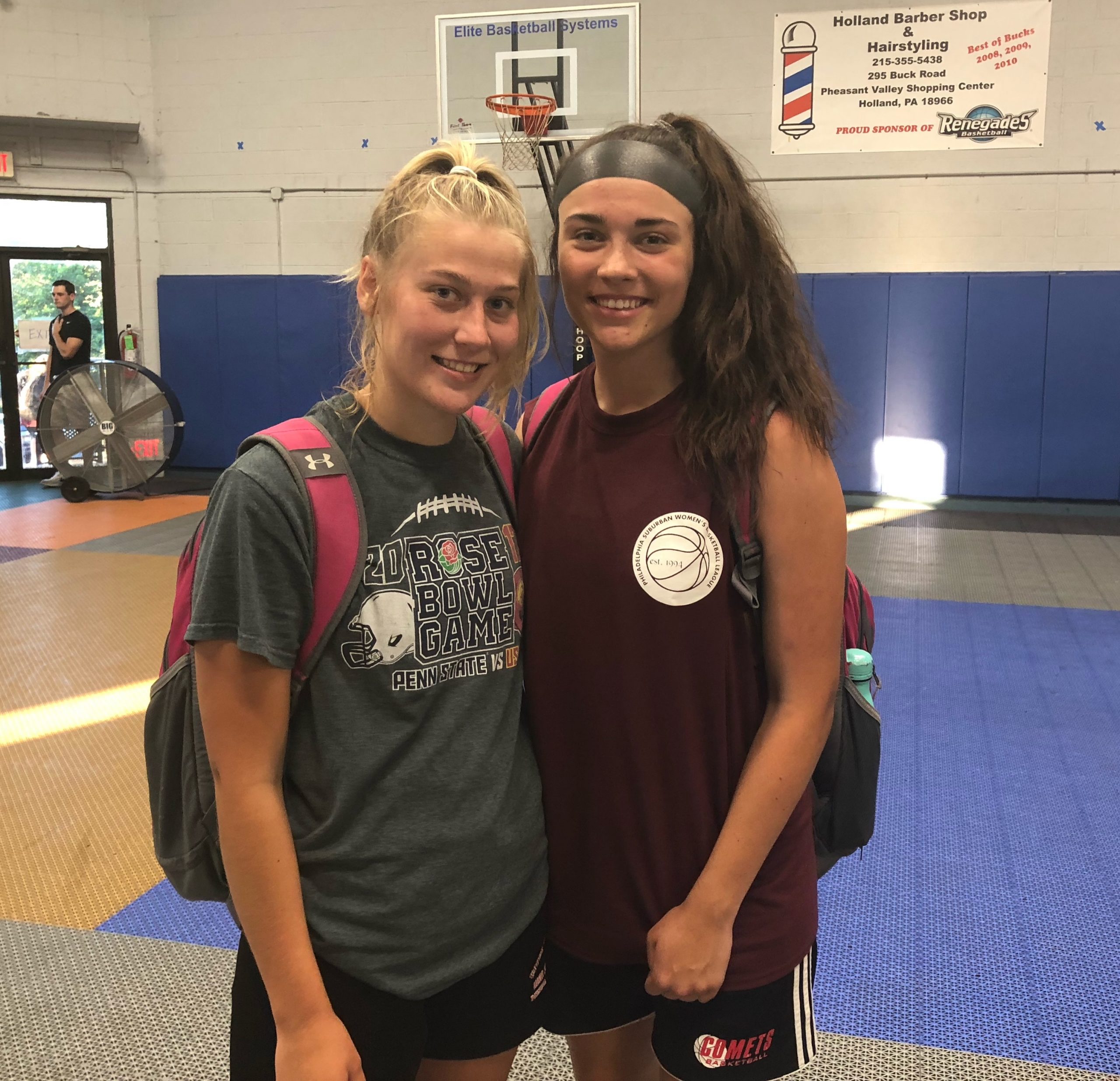 UPPER MORELAND >> Anna McTamney pushed the ball up the floor, looked up and fired a lead pass to Dayna Balasa for an open 3-pointer.

Anyone who closely followed the SOL’s American/Liberty conferences over the past four years may have done a double-take at that scenario. McTamney and Balasa were both four-year starters for Plymouth Whitemarsh and Upper Dublin respectively, arguably the two biggest rivals in the conference’s girls’ basketball table.

This summer, they’re on the same team playing with their future USciences teammates in the Philadelphia/Suburban Women’s Summer Basketball League but it’s not uncharted territory either.

“It’s nice being back together,” McTamney said after the two made their summer league debut Thursday night at the Kelly Bolish Gym in Upper Moreland Township. “Right before our game, Dayna’s parents said ‘Remember, Dayna’s on your team, not the other team.'”

In their high school careers, the duo faced off 11 times with McTamney’s Colonials holding a narrow 6-5 edge in head-to-head meetings with Balasa’s Cardinals. McTamney has dibs on the conference title bragging rights, with PW winning the SOL Liberty Division title in 2021 and SOL American Conference crowns in 2017-18 and 2019-20, but Balasa has a PIAA 6A title to her name from her freshman year in 2017-18.

After two years as opponents in high school, they met as teammates through the Comets AAU program based in Delco. They already knew each other pretty well from five games against each other between freshman and sophomore seasons and became friends pretty quickly traveling that summer with the club team.

It also made their six meetings over the next two seasons interesting.

“We took it really seriously. When we would play against each other, I wouldn’t even look at her, I couldn’t,” McTamney said. “We weren’t friends during those games. We would talk after, but we wouldn’t talk during the game, so it was definitely different.”

Balasa didn’t play AAU last summer, so the year before was their only experience as teammates prior to this summer league and their upcoming freshman year at USciences, which is itself returning after not playing a 2020-21 season due to the COVID-19 pandemic. The two had a unique unofficial start to their college careers, playing against a team made up mainly of USciences alumni on Thursday.

McTamney and Balasa played in the same rotation during the game’s first half while they were mostly in separate groups in the second half. It was a bit of a slow first quarter for both, although McTamney was able to knock down a pair of free throws but they took off in their second quarter stint.

The pass in transition led to the first of Balasa’s three second quarter treys and McTamney picked up a second assist to her rival-turned-teammate-turned-rival-turned teammate a few plays later. McTamney got a bucket on a nice take in the third quarter and finished the game with four points, four rebounds and three assists with Balasa tallying nine points, two boards and a helper as the current Devils beat the alums 38-32 in a low-scoring game.

“It’s definitely more fun playing with her than against her,” Balasa said. “I know her every move, but that also means I always know where she’s going to be on the court.”

Both players graduated from their respective programs with plenty of wins and accolades. McTamney earned third team all-state honors as a senior to cap a run with the Colonials that saw her become the 10th player in program history to score 1,000 points, with her 1,127 good for ninth all-time and 801 career rebounds, the most in more than a decade.

Balasa also scored 1,000 points, doing it mostly from behind the 3-point arc. The guard graduated as UD’s all-time leader in 3-point field goals, with 266 makes from behind the line and 1,032 career points.

“From having to scout Dayna all the time, it was always ‘don’t let her shoot the three,’ so it’s a lot better getting to pass it to her,” McTamney said. “Now I want her to have it because she’s so good at shooting.”

Balasa committed first, pledging to the Devils in April of 2020 while McTamney followed a few months later in August. In high school, both players wore No. 32 on their jerseys but only one of them was going to get it at USciences.

McTamney, who had dibs on 32 with the Comets while Balasa wore No. 2, ceded the number to Balasa.

“I told her ‘you committed months before me, you got it,'” McTamney offered. “I think Dayna said we could do rock, paper, scissors, shoot for it but I said it was fine and I’ll take a different number.”

The two incoming freshmen, both wearing their pink Comets backpacks after Thursday’s game, thought they had the right home for the next four years, only to get a shock in early February. St. Joseph’s and USciences announced a proposal to merge, leaving all the Devils’ athletic programs unsure of what was to come next.

McTamney knew immediately where her first call would be.

“It was February 10, I remember because it was the day before I got my 1,000th point and all I could think about was how much (the news of the merger) sucked,” McTamney said. “I called Dayna and said ‘what are we going to do?’ and started crying. Everything happens for a reason, so we’ll make the most of this and we’ll be fine.”

“As soon as we found out, we were on the phone,” Balasa said.

Both McTamney and Balasa cited the school’s academics as a major reason why the chose to go there, on top of the highly-regarded women’s basketball program that has harbored numerous local alumni over the years. After some initial fears, USciences determined their would be one last season.

That’s also why the summer league is important. Thursday, a couple of the team’s veterans were directing the newcomers where to go on offense and despite it being an offseason run, the play was as competitive as she expected.

Both Balasa and McTamney are focused on contributing in whatever way they can as freshmen and aren’t yet looking to what comes beyond that.

“We all have to ball out this year and do the best we can,” McTamney said. “Everyone on the team wants to have a great season, have fun and go all out, so I think we’ll be pretty successful.”