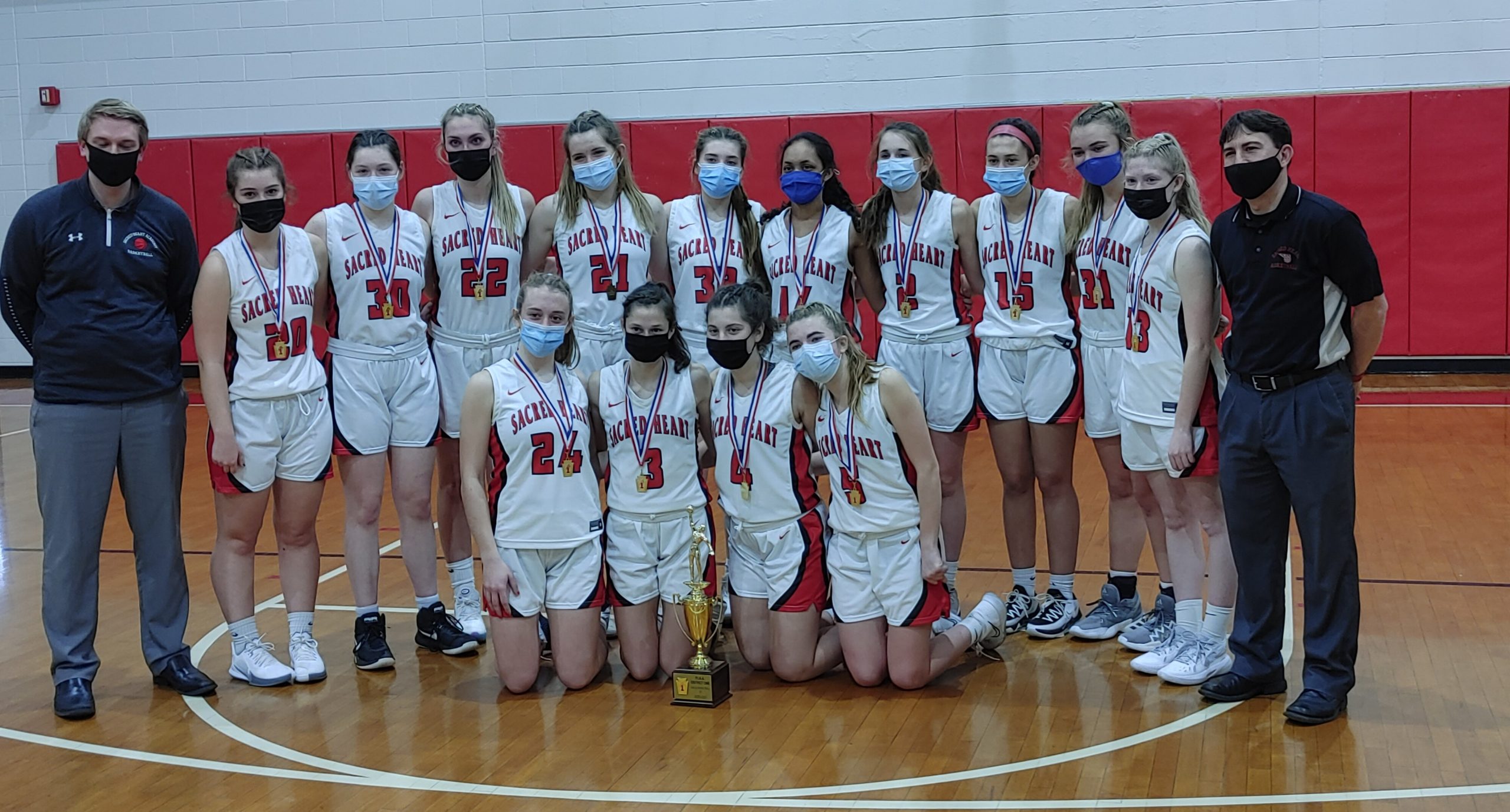 RADNOR — Ainsley Davis had to step away from the Sacred Heart Academy basketball team in January, days after the start of her junior season.

She had tested positive for COVID-19.

“It was really hard,” Davis said. “I had it pretty bad for a few days, but (then) I started to feel a lot better. It was really difficult to not come back and play right away because of protocol, even though I was feeling fine. So, when I was able to come back it was really nice to be able bring so much energy and motivation to the team.”

Davis returned in late February and helped Sacred Heart earn the No. 1 seed in District 1 Class 2A. The Lions won their fifth straight district championship Tuesday with a 47-11 victory over No. 2 Dock Mennonite.

“I felt like I took it all for granted,” Davis said. “I never really expected to have to sit out and not be able to play, but I was glad to be back on the team.”

Davis, a junior forward, scored a game-high 16 points and grabbed a team-high eight rebounds Tuesday. She did most of her damage inside the paint and shot 7-for-16 from the field.

“She’s one of our leaders,” coach Zach Shuler said. “Offensively, she can do so much. She can post up, she can hit 3s and she can rebound, too. She’s definitely been a big weapon for us. The first game of the season we played Dock and she scored 19 in that game. It was great to have her back and she’s been great.”

Davis, junior guard Kathryn Gallagher and senior guard ML Franz led the way Tuesday. Franz is grateful to have the opportunity to win a fourth title. She and Annie DeFrancesco are the seniors on the team this year.

The game was never in doubt for the Lions (9-4). They scored the first 10 points and held a 27-6 advantage at halftime. Dock Mennonite shot 2-for-36 from the field, committed 20 turnovers and didn’t make a basket in the second half.

Davis made at least one field goal in every quarter. Franz scored four of her six points in the first half and finished with four assists, four rebounds and two steals. Gallagher banked three 3-pointers in the first 16 minutes of play and totaled nine points, four rebounds and two assists. Kyra Santora added six points, four steals, three boards and one assist off the bench.

Gallagher has enjoyed a breakout season and leads the team in scoring. Not bad for a kid who didn’t play her freshman year.

“I thought I would always be just average, I guess. I played in middle school and then got injured my eighth-grade year, so I had a two-year gap where I didn’t play,” Gallagher said. “My sophomore year we had three really good seniors and my job was to pass the ball. But this year … I knew I had to step up. I didn’t think this would be my year, but it kind of was my year. It’s really exciting to see my hard work in practice pay off.”

Next up for Sacred Heart is another trip to the PIAA Class 2A tournament. Because the Lions do not allow fans in attendance, they likely will have to make the long trek to District 11 to face either Mahanoy, Williams Valley, Tri-Valley or Minersville. The first round of the Class 2A tourney is scheduled for next Tuesday.

“It’s really nice to be able to continue the legacy,” Davis said. “We have won five straight championships and that’s something we can be proud of.”