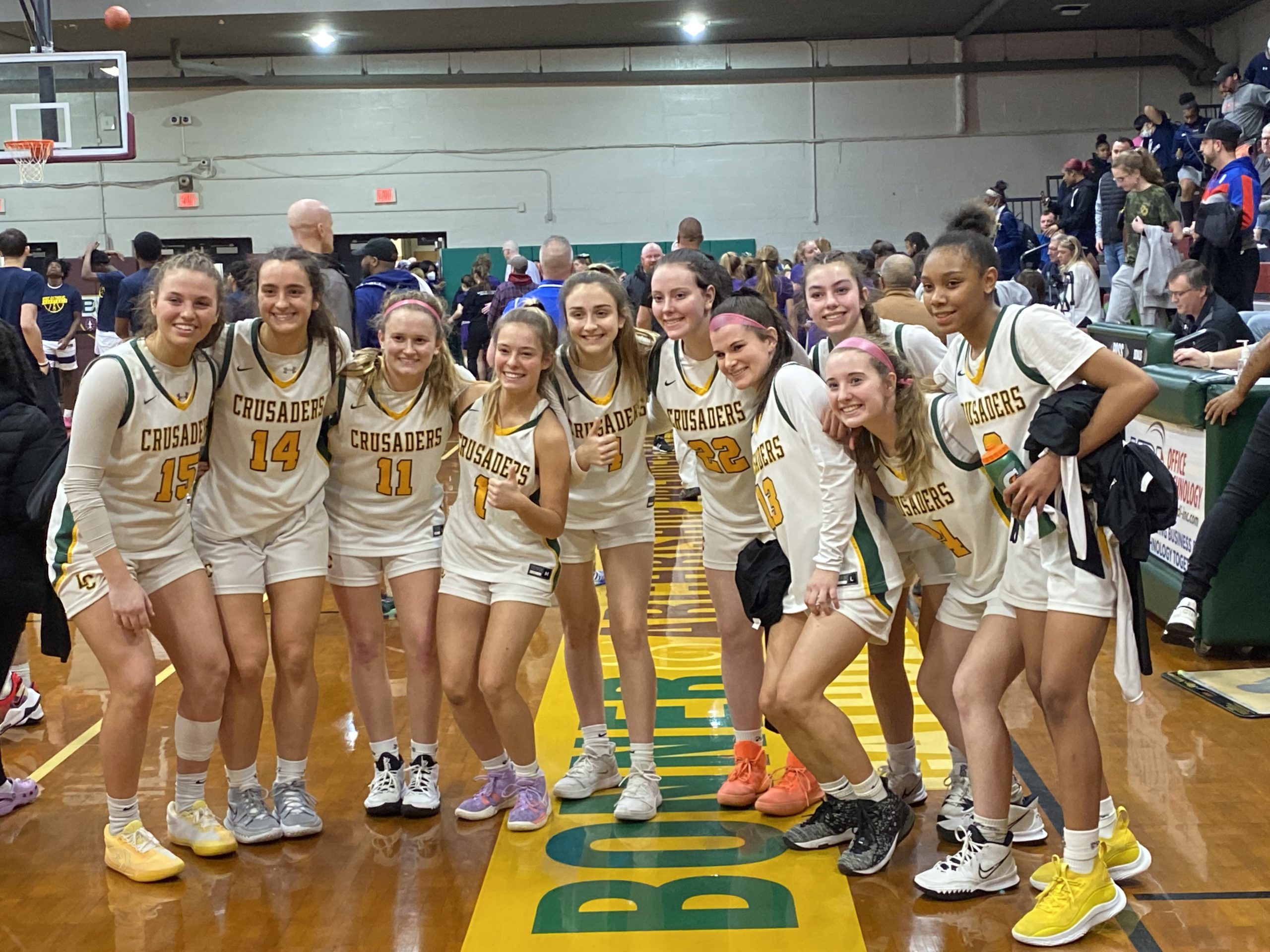 The Lansdale Catholic girls basketball team poses for a photo after defeating Lancaster Catholic 66-57 in the PIAA-4A first round on Wednesday, March 9, 2022. (Mike Cabrey/MediaNews Group)

A year later, the Gwynedd Mercy and Archbishop Wood girls basketball team are back at the same spot – facing each other to reach the PIAA Class 4A semifinals.

Either the Monarchs’ unbeaten season or Wood’s run at state title repeat comes to an end Wednesday with two meet at Wissahickon for a quarterfinal matchup at 7 p.m.

On the other side of the 4A bracket, Lansdale Catholic is also aiming to reach the final four as the Crusaders head out to Garden Spot High School to take on District 3 champ Delone Catholic for a 7 p.m. contest.

Gwynedd Mercy has not lost a game since March 20, 2021 when the Monarchs went to Wood for their 4A quarterfinal and were handed a 60-38 defeat. The Vikings took a 29-17 lead into halftime and pulled away by outscoring GMA 17-4 in the third quarter.

Kaitlyn Orihel – now at Villanova – became Wood’s all-time leading scorer in the contest as she finished with a game-high 24 points. Ryanne Allen added 18 points. Gwynedd got 14 points from Kaylie Griffin – now at Saint Joseph’s – and 11 points from Sofia Coleman.

Wood went on to beat Scranton Prep and Villa Maria to claim its first PIAA title since 2017 and is now another three victories from defending the crown. GMA, meanwhile, comes into Wednesday a perfect 26-0 after besting Bermudian Springs 57-49 in the second round Sunday.

The Monarchs – who won their fifth straight District 1-4A title after claiming its first AACA championship since 2016 – trailed Bermudian Springs 31-26 at halftime at Schuylkill Valley but bettered the District 3 fourth-place finisher 13-4 in the third to take a four-point lead into the fourth.

GMA stretched its advantage to 10 (49-39) with 3:30 left and held off the Eagles from there. Hannah Griffin led Gwynedd with 16 points, Bianca Coleman collected 13 points while Kutztown commit Sofia Coleman had 10 points.

GMA opened states with a 52-40 first-round win over District 12 No. 4 seed Audenried last Wednesday at Wissahickon.

Archbishop Wood (22-5) did not have its best shooting day Sunday at Easton Area Middle School but its defense was superb against District 2 runner-up Scranton Prep as the Vikings reached the state quarters for a ninth consecutive season, rolling past the Classics 44-21.

Wood held Scranton Prep to just 12 points as the Classics led 9-7 after the first quarter. The Vikings scored the first eight points of the second quarter and never trailed from there.

Five straight points from Delaware commit Bri Bowen at the end of the third had Wood up 28-16 and Scranton Prep could only get as close as 10 in the fourth.

Deja Evans scored 11 of her game-high 13 points in the second half. Bowen totaled 11 points. Vanderbilt commit Ryanne Allen did not have a field goal but chipped in six points by going 6-for-6 from the foul line in the first half.

The Wood/GMA winner advances to Saturday’s semifinals to face either District 11 champ Jim Thorpe or District 2 champ Dunmore, who play at 7 p.m. at Berwick Middle School.

Lansdale Catholic (17-7) is meeting Delone Catholic (28-1) for the second time this season, the teams playing in the Boyertown holiday tournament final Dec. 28. The game was tied 37-37 after three quarters but the Squirettes outscored LC 17-11 in the fourth to earn a 54-48 win.

Delone won its first 23 games before falling to Bermudian Springs 56-47 in the YAIAA final Feb. 17. The Squirettes proceeded to win a third straight District 3 title then advanced to the state quarters for a fourth straight season.

Hoddinott had 23 points while Mummert had 16 points as Delone Catholic cruised past District 7 No. 6 seed Montour 58-25 in the PIAA first round last Wednesday.

Lansdale Catholic is in the state quarters for the second time in three seasons. The Crusaders reached the 4A round of eight in 2020 but didn’t get a chance to play for a spot in the semis as the rest of the PIAA playoffs were cancelled due to the COVID-19 pandemic.

In the first round last Wednesday, Lansdale Catholic built a 20-point lead in the fourth quarter then staved off a late rally from District 3 No. 3 seed Lancaster Catholic to earn a 66-57 win at Bonner & Prendergast.

Olivia Boccella had game-high 23 points – hitting four 3-pointers in the first half then going 11-of-13 from the foul line in the fourth. Casey totaled 20 points while Sanyiah Littlejohn connected on a trio of 3-pointers in scoring 16 points.