Grotz: Simply the best? Debatable … but these Lions will always be first state champions 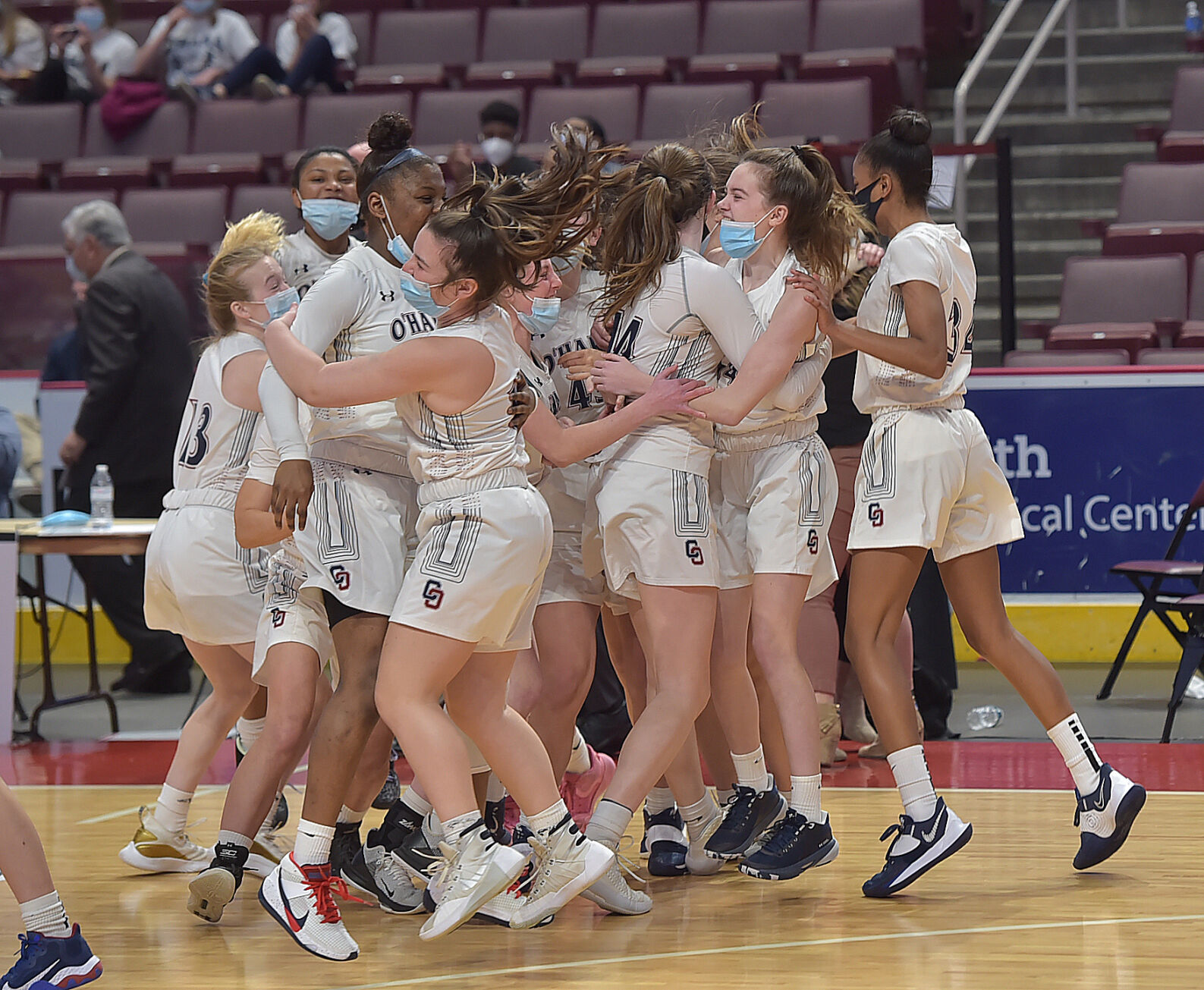 HERSHEY — From the rousing sendoff with the school band in Marple, to the masked and sparsely populated Giant Center witnesses serving as a reminder of the world in which we live, the Cardinal O’Hara girls’ basketball team collected a lifetime worth of memories Saturday.

Even the ride to the PIAA Class 5A state final was special, Sydni Scott shrugging off a fall during a sudden stop to wind up leading everyone with 16 points. The alumni support, the well wishes of classmates and parents, even the conversations the Lions shared on the 90-minute bus ride west are a part of the legacy. The Lions earned every accolade, and five, 10, 20 years from now they’ll get together and live it again. Particularly the game.

The Lions and coach Chrissie Doogan crushed Chartiers Valley, 51-27, to bring home the school’s first girls basketball state title, and the first state championship for a Delaware County girls’ program since Chuck Creighton and Archbishop Carroll won it all in Class 4A in 2009.

So dominant were the Lions, who played relentlessly, you can make a solid argument that they rank right up there with the best O’Hara team since the school began participating in the PIAA tournament. There’s something magical about being the first state champion.

“Oh my gosh, it’s such an amazing feeling,” said Maggie Doogan, daughter of coach Chrissie Doogan. “We wanted to get here so badly. My mom, she wanted this for us so bad. When she was a player at O’Hara they didn’t get to the state tournament or anything. I know she wanted it as much as we did.”

Coach Doogan, who starred at O’Hara under her maiden name Donahue, wasn’t going to leave anything to chance. At the team’s Friday walk-through, a star-studded cast of Hannah Nihill, who led Drexel to the NCAA tournament, Kenzie Gardler, a standout at Villanova, and Lauren Leicht and Emily Holmes, among others, shared their experience and energy with the Lions. They were part of the 2016 team that lost in the state final.

“They told us how special this moment is,” said Maggie Doogan, who scored 13 points and grabbed seven rebounds. “They told us just to enjoy this moment. They told us they didn’t get the outcome they wanted so they were rooting for us. They really fueled us to play for them, play for all the alumni who have been at O’Hara.”

The 2016 O’Hara team was defeated, 57-34, by three-time state champion Cumberland Valley in the title game for Class 4A, then the state’s highest enrollment classification. That group would have teared-up watching how tough these Lions played defense.

Against the 5A defending state champs (in 2019), O’Hara contested every shot, fought through picks as if they weren’t there and helped each other out so often it looked like 10 girls playing defense. The Colts made just 8 of 42 shots from the field compared to 9 of 10 at the foul line. It wasn’t like they didn’t know how to shoot. Doogan blocked five shots.

“We’re so used to switching screens and jumping out,” said Scott, who collected a game-high four three-pointers, along with two steals and two assists. “Our defense, I think the best recipe is just like, talking and getting to the spot before they even get there. And our energy today was so good.”

The Lions limited the Colts to seven points in the first quarter, four in the second frame, nine in the third and seven in the final period, one that ended with a noisy celebration of coaches, players and friends holding a massive Hershey’s Chocolate bar and inextricably linked for the rest of their lives.

“We have the track championship banner up in the gym,” Chrissie Doogan said. “They won the states and they’re the only sport in school that’s won the states. So, we definitely have been wanting to add one in basketball.”

Where this O’Hara team ranks with the others in the history of perhaps the most decorated girls program in Delaware County history is a debate for basketball fans. Some will argue it isn’t as talented as the 2009 team, ranked No. 1 in the country after a 7-0 start, a group anchored by then Daily Times Player of the Year Stephanie Holzer, Natasha Cloud, Danielle Callahan, Alicia Manning and Alysha Womack. That squad was beaten, 57-48, in the state final by Mount Lebanon.

Others might say it’s more on the level of the 2016 team.

The 2020 Lions obviously did something the others did not, and they did it with style points. Scott thinks this is the best O’Hara state tournament team, and good luck if you disagree.

“One. I think we’re No. 1 out of all the years,” Scott said. “We’re the first O’Hara team to do it. Twenty years later we’re still going to be the first state champs.”

Greatest O’Hara team of all time?

“I don’t know about that,” coach Doogan said. “They’ve been together now for three years. They have a lot of playing time. They’re used to each other, they like each other and they were determined. They had great senior leaders. And nobody wants to end the season on a loss.”

Particularly not this O’Hara team.