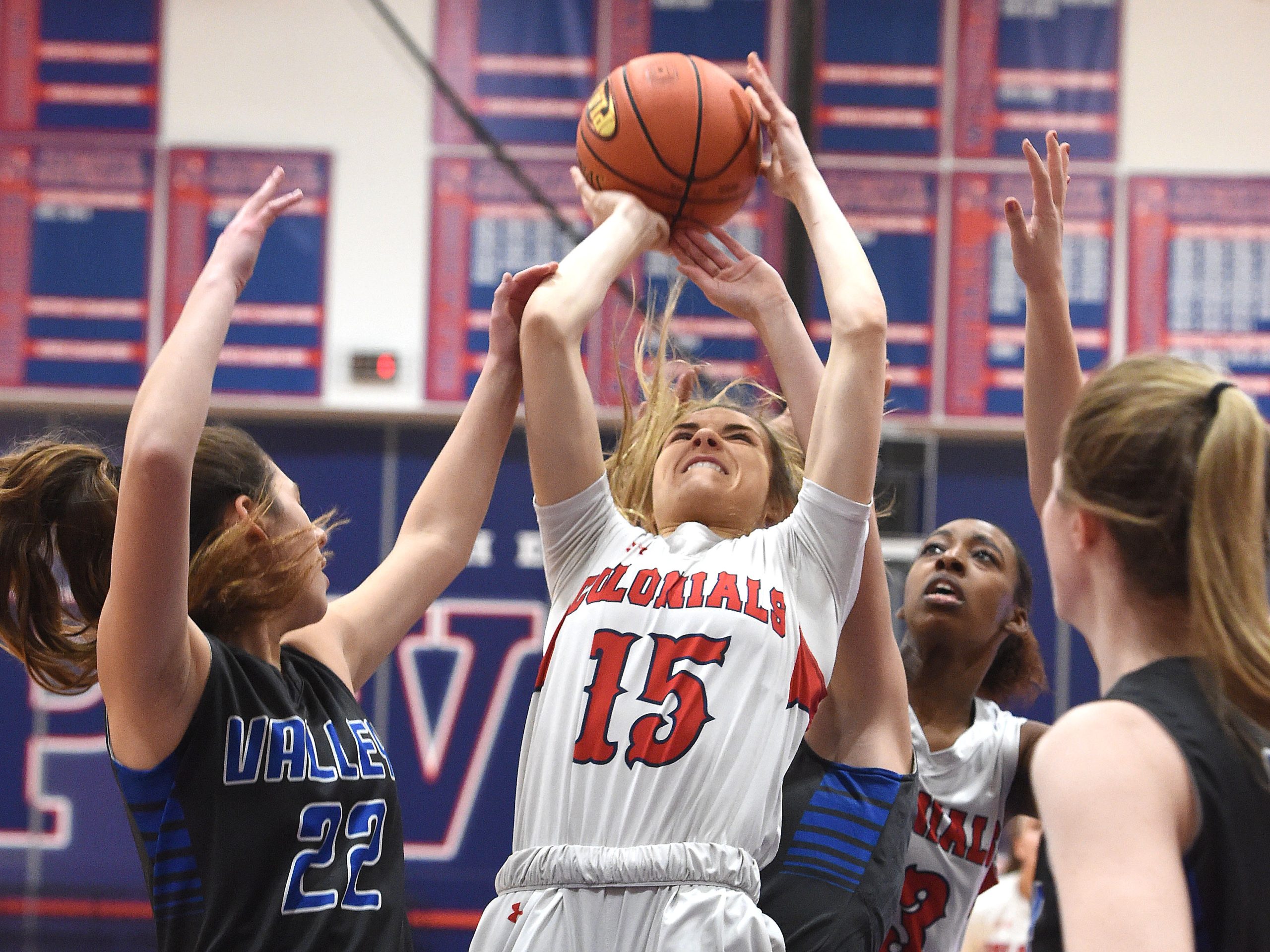 WHITEMARSH >> Great Valley had a tough task Wednesday evening, facing undefeated Plymouth Whitemarsh in the second round of the PIAA District 1 6A girls basketball tourney.

The top seeded Colonials (26-0 overall), who featured a trio of seniors committed to college basketball, applied the pressure early, jumping out to an early lead. Later, P-W held the Patriots scoreless for nearly two quarters en route to a 53-9 victory.

With the loss, No. 16 seed Great Valley (15-10) moves to the playback round, where they will face No. 8 seed Downingtown East. The winner of that game will earn a PIAA 6A state tourney berth.

“We earned the chance to be on the court with Plymouth Whitemarsh tonight, and we wanted to go out there and compete,” said Great Valley head coach Alex Venarchik. “But for us to compete, we have to handle their pressure (defense) and we have to box out, and I don’t think we did the boxing out as well as we should.

In the first minute of Wednesday’s contest, Plymouth Whitemarsh senior forward Lainey Allen, a University of Maryland Eastern Shore commit, scored, then the Colonials applied a pressure defense that led to several Patriot turnovers. P-W senior Erin Daley scored on a three-point play following a Great Valley turnover, then following a Patriot miss from the outside, P-W junior guard Abby Sharpe was fouled and made both free throws. Following a Great Valley turnover, P-W senior Jordynn Thomas, a Jefferson University commit, scored underneath to make it 9-0 for the hosts.

The Patriots battled back, as Laura Lum hit a 3-pointer, then Gia Sioutis grabbed a loose ball under the basket and scored to cut the hosts’ lead to 13-5.

As the first quarter wound down, the Colonials started to build their lead. Sharpe scored underneath to make it 17-5, then following a Great Valley turnover, Sharpe dropped in another layup and it was 19-5.

Sioutis started the second quarter by battling through heavy traffic to score underneath and cut the hosts’ lead to 19-7. Unfortunately for the Patriots, that was their last points of the second quarter. Plymouth Whitemarsh led 33-7 at halftime.

“Tonight we learned how important fundamentals are, not only against teams you’re even with, but also against teams that are better than you,” said Venarchik. “If you execute the fundamentals and do the things you’re supposed to do, you hopefully give yourself a chance to stay in the game. Tonight, I don’t think we executed our fundamentals too well.

The Colonials held Great Valley scoreless in the third quarter, and held a 42-7 lead at the end of three periods.

Plymouth Whitemarsh head coach Dan Dougherty said: “We saw Great Valley play against Conestoga, and they’re a very well-coached team, very fundamental, they kind of like to run through all the progressions of their man offense, so we knew that we had to be disciplined defensively, we had to be able to switch.

“The other thing that we tried to do is that Great Valley is a little inexperienced at the point guard position, so I thought that if we extended our defense and used a full-court press, we could use out athleticism to disrupt their offense.”

The Patriots’ scoring drought ended when Peyton Rhodes scored on a put-back with a minute left in the fourth quarter.

“That was one of our best defensive performances this season,” said Dougherty. “Our team has played great defense all season, and we go through stretches like that. Our length and athleticism allows us to switch a lot defensively. And our team is experienced — for our seniors, this was their 21st playoff game in four years, whereas Great Valley is relatively inexperienced. Our experience showed in the first quarter particularly – when, as far as I could see, there were no nerves on our side.

“We have three pressure defenses that we try to use, depending on the opponent. So tonight, with our big size advantage, we thought that Lainey Allen on the ball would disrupt them from trying to get the ball in. The other thing we [sometimes] used was a trail trap when Great Valley was bringing the ball up the floor, trying to disrupt the ball-handler constantly so they can’t get into their offense.”