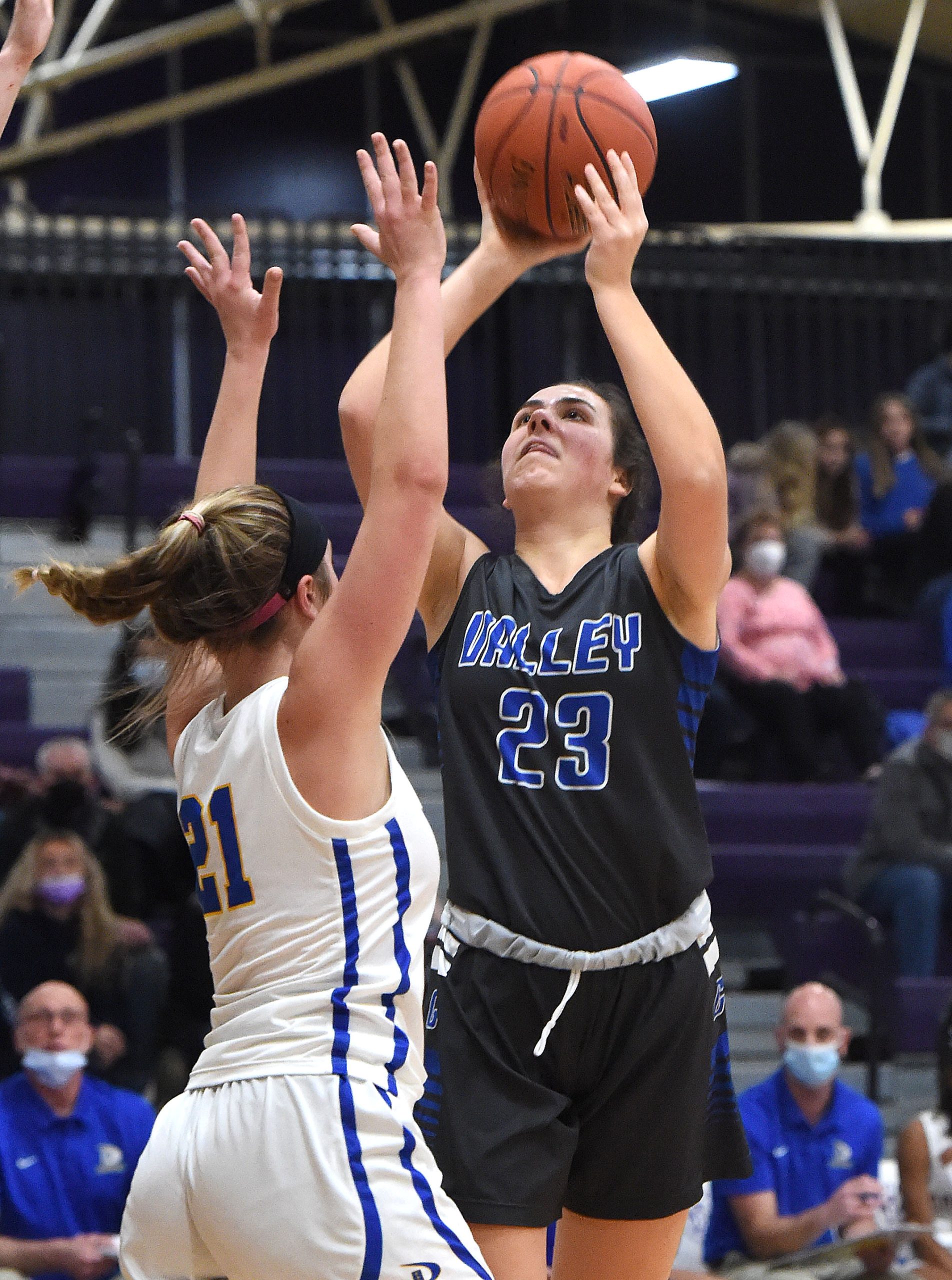 East Whiteland >> It was everything a 16-17 seeded matchup in districts could be expected to provide, a tight contest, good defense, clutch shooting, drama at the end and even a little loose in spots.

Number 16 seed Great Valley took the lead late in the game on a basket by Gia Sioutis and survived a last-second 3-point attempt to down No. 17 Conestoga, 42-39, in the opening round of the Class 6A District 1 Girls Basketball Tournament on Friday.

The Patriots (15-8) will face a much stiffer test in the second round as they will face top-seeded and unbeaten Plymouth Whitemarsh on Wednesday.

“It was what it was matched up to be,” said Great Valley coach Alex Venarchik. “It was two teams that wanted to win and they both played like it. They both made shots and neither team shied away from the moment. It was a fun game to be a part of.”

“We knew it would be a tough game. I know Alex well and I thought his kids played well,” said Conestoga coach AJ Thompson. “Our kids played hard. It was a good experience for them to play against a good team. I just wish them good luck.”

Great Valley led 32-29 after three. Conestoga opened the fourth with a basket by Marisa Francione to cut it to 32-31.

Charlotte Powell then banked in a straightaway 3-pointer to push the advantage to 35-31. The Pioneers chipped away, thanks in part, to turnovers in three consecutive trips down the floor by Great Valley.

Conestoga took advantage of a miscue which led to a layup by Kate Galica for a 36-35 lead with 2:10 left.

Sioutis came back and hit a jumper from in close to push the Pats ahead, 37-36. Franchione missed an off-balanced three and Great Valley built a 40-36 lead at the minute mark.

“I had that one turnover which I was freaking out, but I used that as momentum to get to my next layup and my next two foul shots,” said Sioutis. Bella Valencia buried a three to cut the margin to 40-39. Gracen Curley then made two three throws for a 42-39 lead.

Katrina Valencia missed a three as the time wound down and Great Valley took over under its own basket with less than a second left. The inbounds hit off a ‘Stoga player, but time expired before they could gain control and Great Valley could have a collective exhale as they moved on.

“We wanted to keep everybody in front and gusrd the line,” said Venarchik. “If they took a layup, let them take a layup. But, they locked down and it make it hard on Conestoga.”

Conestoga took a little bit of time to settle in to the game. They scored just two baskets and trailed 12-4 after one.

“I think we had a little bit of nerves to start, we’re pretty young,” said Thompson. “Great Valley had a great crowd, loved the environment. I thought that was great for our girls to see that.”

Galica led the Pioneers with 16 points, including eight in the third quarter, and freshman center Janie Preston added eight. Curley paced the Patriots with 18 points.

The Pioneers wrapped up their season at 13-9.

“We were 5-9 with a a season due to COVID and to bounce back and have a regular season where we were 13-8 in a tough Central League,” said Thompson. “I’m super proud of the girls. They work hard, they’re a great group of kids.”