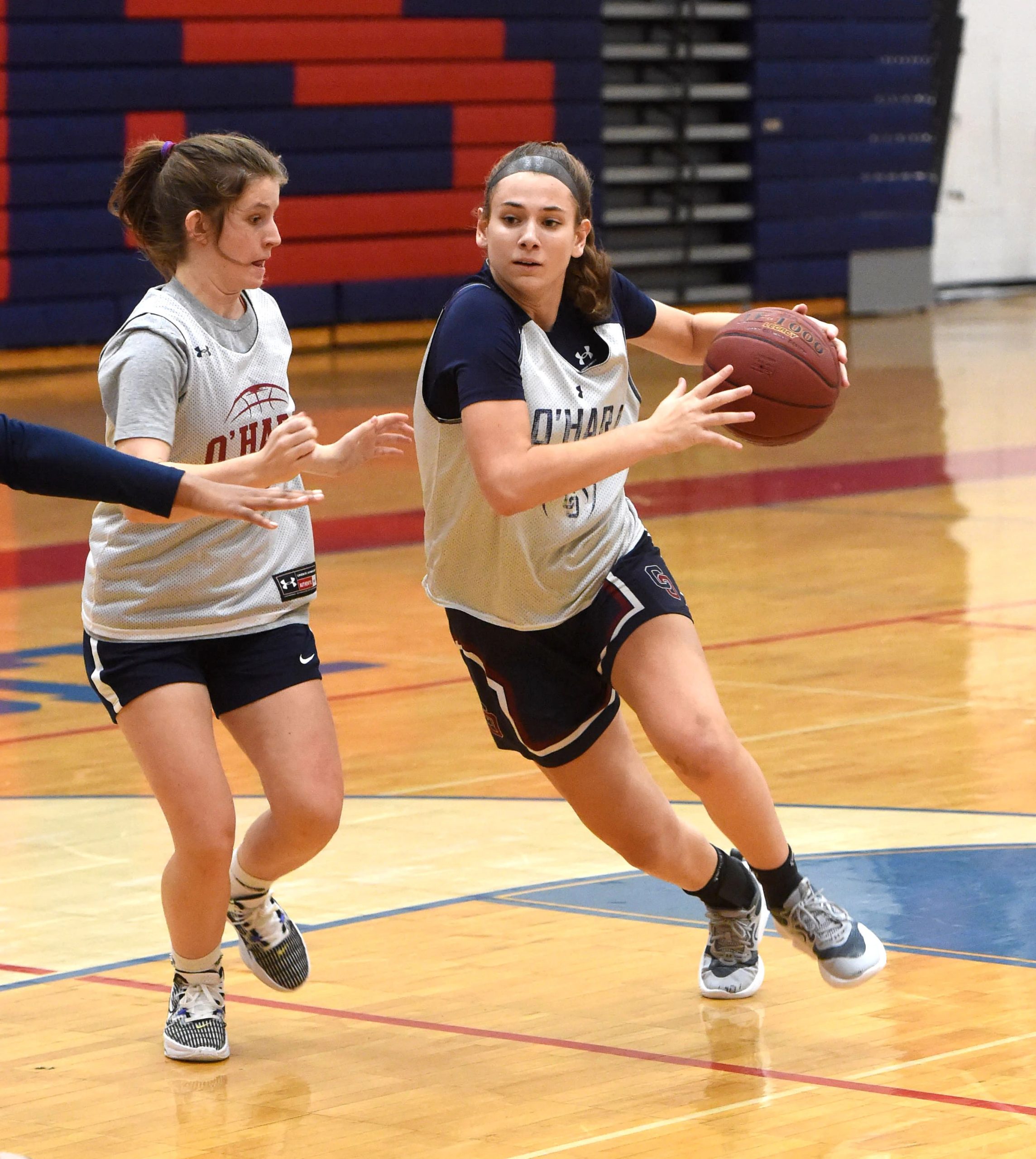 MARPLE —  Molly Rullo is too modest and team-oriented to ever admit that she is now the No. 1 player at Cardinal O’Hara.

She is the face of the latest generation of Rullo basketball greats, a lineage that stretches back nearly 80 years ago, when her grandfather Jerry Rullo starred at Temple and later won an NBA title with the Philadelphia Warriors.

Rullo’s freshman season was close to perfection. She fit in from the start with senior leaders Maggie Doogan, Sydni Scott and Annie Welde. Rullo was an excellent outside shooter and defender and scored from all areas. She played an important role in a magical season for the Lions, who won the Philadelphia Catholic League championship and a second consecutive PIAA Class 5A title. Rullo averaged 10.5 points and five rebounds per game while shooting 40 percent from 3-point distance.

“I’m super excited for this year,” Rullo said before practice Tuesday. “Last year was really awesome. I think just getting back into the environment again is important, like playing the PCL teams and getting great competition from everyone else we play. It’s going to be a fun season. We lost a couple of seniors, but our juniors played against them all year in practice. They made us better as starters. Although we are a little bit younger this year, and it might take us some time to know our roles and stuff, I feel like we’re pretty good. The players who are now starting did great last year. Not everyone gets to go up against three or four Division I players in practice every day.”

Rullo and senior guard Bridget Dawson are the returning starters at O’Hara, which will play as a PIAA Class 6A school this season. Dawson played all of the 2021-22 regular season and Catholic League playoffs, but was ineligible for the PIAA postseason. That meant more playing time for then-sophomore guards Greta Miller, Carly Coleman and Joanie Quinn. All three made valuable contributions in key moments during the Lions’ run to the Class 5A championship.

“Being younger and playing in those big moments, I think, really prepared us,” Quinn said. “I can see a huge difference in my defense from my freshman year to now after guarding Syd (Scott) for two years in practice. It’s really prepared us for this year because we know we are going to see very high level of teams with Division I recruits.”

Quinn grew up in an O’Hara family. Her mom Joanie and aunt Annie (nee Gallagher), were part of the legendary Lions teams of the early 1990s along with coach Chrissie Doogan (nee Donahue). All three played at La Salle.

“Growing up I watched O’Hara and I just wanted to be exactly like them,” Quinn said. “So there’s a little bit of pride there because I now get to do what my mom did and all these great teams that I watched in the past. I honestly think that has helped because the pressure that we sometimes feel, I’ve grown up around it and watched those teams my whole life. So I think that has prepared me and my team. Now we’re coming back from back-to-back state championships, so there’s going to be a lot of pressure. We’ve lived with it.”

Senior forward Maria McCallen, who backed up two-time Daily Times Player of the Year Maggie Doogan the last couple of seasons, gives the Lions size and strength inside the paint. Senior Sydney Wiley returns after missing the majority of her junior season because of injury. Megan Rullo, Molly’s freshman sister, should play a supporting role right away.

“These kids for the most part have experience winning and they’ve experienced competitive practices,” coach Chrissie Doogan said. “I think they’re just hungry. The juniors, especially, are hungry to prove themselves and really show that they belong.”

Catholic League counterpart Archbishop Carroll should be in the same conversation as O’Hara. Despite losing All-Delco and all-state guard Grace O’Neill (Drexel), as well as sharp-shooting wing Maggie Grant (Villanova) to graduation, the Patriots return sisters Taylor and Brooke Wilson.

Taylor Wilson, a senior forward, earned All-Delco honors last winter. One of the strongest low- post players in the league, she was the fourth-highest scorer in Delco at 14.5 points per game. She also has the ability to play around the perimeter and hit the outside shot.

Brooke Wilson, a junior guard, is an elite defender who also averaged double digits in scoring. Together the Wilson sisters played vital roles in helping the Patriots to a perfect regular season in the Catholic League. Carroll finished 21-6 overall with its season ending in the second round of the Class 6A tournament.

Coach Renie Shields said the Patriots will look to play “with balanced offense and strong defense.”

This figures to be another rebuilding season at Bonner & Prendergast, which finished 5-13 last winter. The Pandas will miss All-Catholic League guard Bridie McCann, who is playing basketball at Siena College.

“We are very young and I think we will struggle early, but hope to get better each game,” said coach Tom Stewart, who begins his 49th season coaching high school basketball.

Whereas O’Hara and Carroll are 6A programs, Bonner & Prendergast remains at 4A. Archbishop Wood, the reigning Class 4A champion, is now 5A.