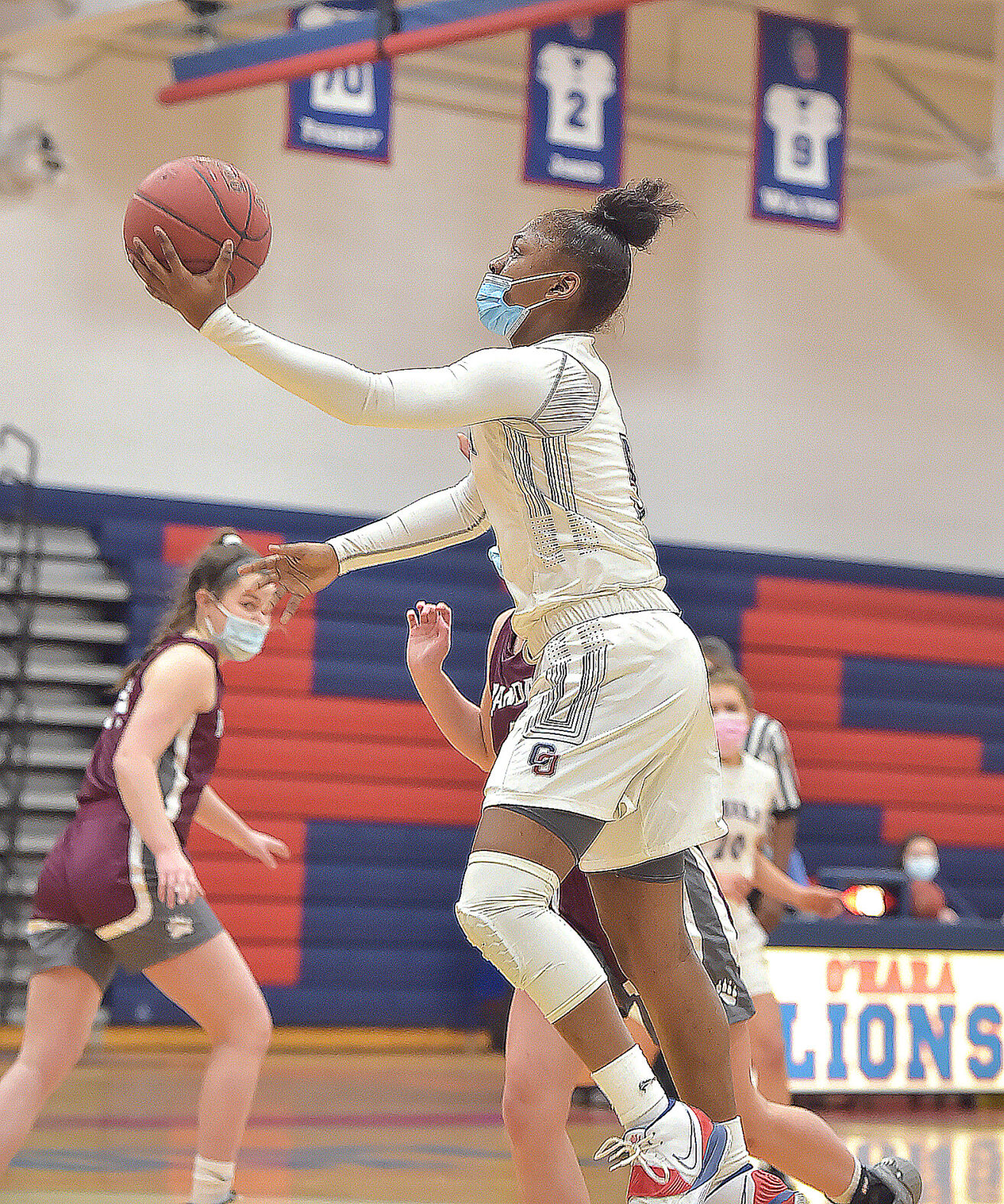 Cardinal O'Hara's Sydni Scott scores on a layup during a game last season.

For the first time in history, three PCL teams captured PIAA championships last March: Archbishop Wood (Class 4A) Cardinal O’Hara (5A) and West Catholic (2A). No one should be surprised if three or more teams from the best high school conference in Pennsylvania go on to win PIAA championships in 2022.

Cardinal O’Hara returns three of its five starters from a 15-4 team that won a PIAA state championship, including 6-foot-2 senior forward Maggie Doogan, the reigning Daily Times Player of the Year.  The Richmond commit was brilliant in the state final against Chartiers Valley and finished her junior campaign averaging 14 points and eight rebounds per game.

Senior guard Sydni Scott, one of the best combo guards in the state, is an All-Delco, All-Catholic League and all-state selection. She posted averages of 11 points, four rebounds and four assists per game in her junior campaign.

Annie Welde, a junior forward, is poised for a breakout season after starting last year. Welde is a strong mid-range shooter who can play the wing and pick up rebounds.

O’Hara will miss All-Delcos Amaris Baker and Siobhan Boylan (Marist), but sophomore guard Carly Coleman, Joanie Quinn and Greta Miller should be ready to have big roles on the team. Freshman Molly Rullo, a 5-10 forward, and Penncrest transfer Bridget Dawson are being counted on to contribute as well.

While the Lions won their first state title in program history, they are aiming to end a minor Catholic League championship drought. O’Hara last won the league during the 2017-18 campaign back when Doogan and Scott were in the eighth grade.

Archbishop Carroll brings back all but one starter, forward Karli Dougherty, who is playing lacrosse at Drexel.

All-Delco senior guard Grace O’Neill (Drexel commit) and senior guard Maggie Grant (Villanova) are two of the top returning players in the league. The Lions were bounced in the first round of the PIAA Class 5A tournament and fell to Archbishop Wood in the Catholic League quarterfinals in heartbreaking fashion.

Brooke Wilson, a sophomore guard/forward, is garnering Division I interest and is bound for a breakout year. Other returning starters for coach Renie Shields include juniors Taylor Wilson and Meg Sheridan.

Tom Stewart begins his 29th season as head coach at Bonner-Prendergast. Last year the Pandas went 4-9 overall and failed to qualify for the state playoffs. As a Class 4A program, B-P must contend for a state playoff berth with reigning champion Archbishop Wood.

Archbishop Wood defeated O’Hara for the PCL championship in February, avenging a regular season loss. The Vikings return a pair of Division I standouts in senior Ryanne Allen (Vanderbilt) and Bri Bowen (Delaware).

Academy of Notre Dame has one of the best players in the county in senior Maeve McErlane, a two-time All-Delco. Last winter, the DePaul commit carried the Irish to an 8-1 record and first-place finish (the Inter-Ac played a non-championship, league-only schedule). McErlane was the No. 1 scorer in Delco at 21.4 points per game.

With McErlane leading the way, the Irish should be among the favorites to win the league title. Katie Halligan, a 5-foot-11 sophomore forward, started the majority of games for the Irish (currently 3-0) in her rookie season. Junior point guard Julia Dever returns to the starting lineup.

“The past three years, we graduated exceptional players, along with great leadership,” fourth-year coach Lauren Power said. “We have several exciting freshmen to add to a veteran squad with seven seniors.  Our biggest challenge will be our younger players adapting to new or increased roles.”

It was somewhat chaotic in the offseason for Agnes Irwin School, which in August hired veteran area basketball coach Bobbi Morgan (Haverford High, Haverford College) as its next head coach and assistant athletic director. However, just one month later Morgan left AIS to take the head coaching position at Ursinus College.

Shanette Lee was hired to fill the void at AIS. Lee spent more than two decades as an assistant coach at Villanova, where she was a Big East Rookie of the Year and set the program’s all-time assists mark as a senior.

“The team has shown determination and the desire to get better each day,” Lee said. “We have some great leaders that will lead the team to success this season.”

Episcopal Academy went 4-5 last year, but played very well over its final five games. Senior guards Reilly Cassidy, Amanda Purcell and Bella Piselli are all back in the lineup along with junior forward Gaeli Keffer-Scharpf.

“EA brings some more depth to this season with four returning starters and a deeper bench,” said coach Chuck Simmonds, who is in his 18th season. “They are hoping to lean on that experience through a tough Inter-Ac schedule, as well as some quality non-league opponents. EA will look to create easy opportunities early stemmed by good defense and strong rebounding.