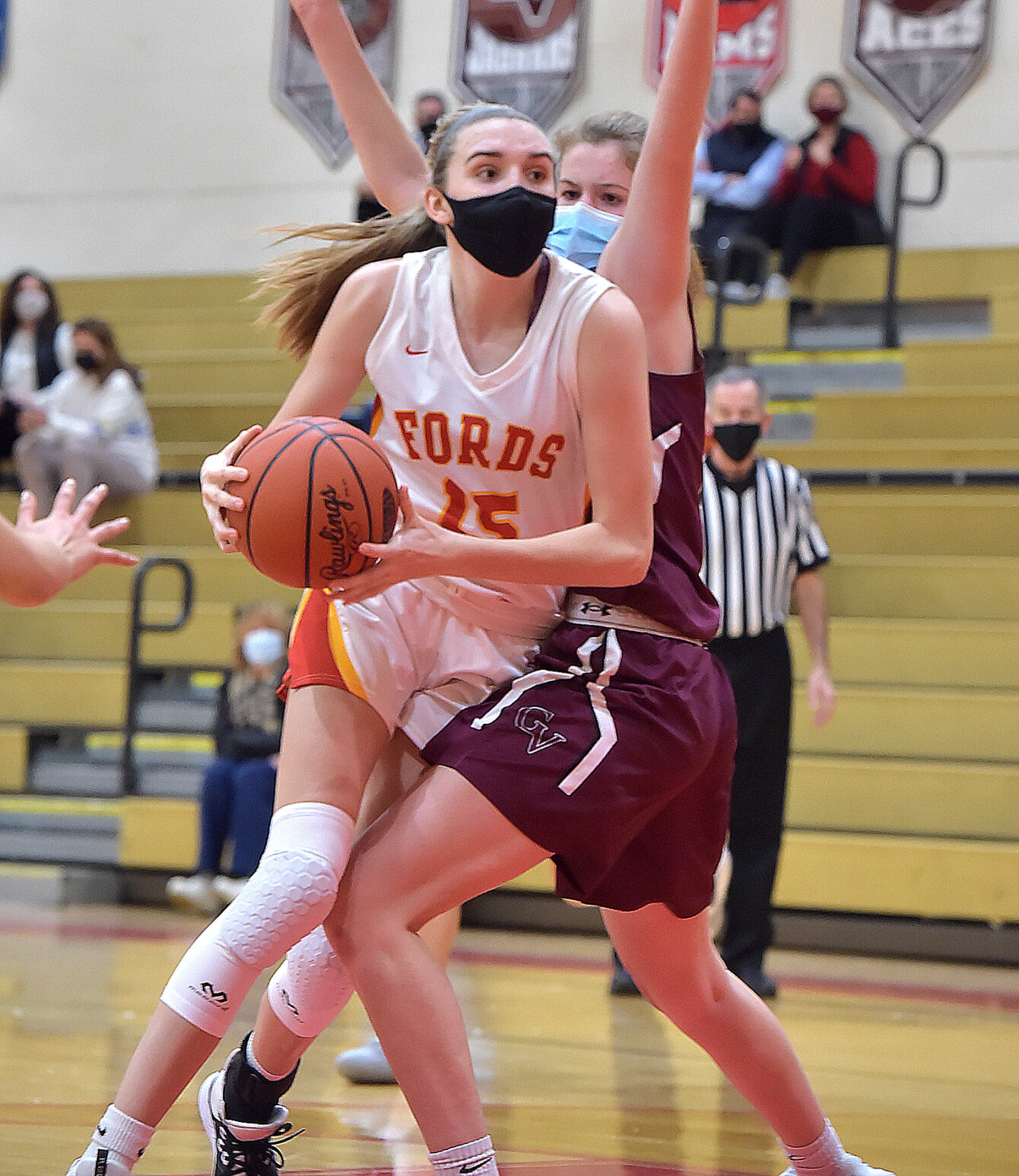 Haverford's Caroline Dotsey drives to the basket in a game last season.

By and large, Garnet Valley and Springfield have dominated the Central League for most of the past decade.

The Jaguars and Cougars have combined for seven of the last eight championships.

In last year’s pandemic-shortened season, Springfield rolled through the league undefeated en route to winning both the Central and District 1 Class 5A titles. The Cougars were buoyed by All-Delco senior guards Alexa Abbonizio and Rachel Conran, both of whom were four-year starters. It wasn’t until the Cougars played eventual state champion Cardinal O’Hara in the PIAA Class 5A semifinals that they suffered their first and only loss.

Garnet Valley posted a 9-9 record and failed to make the District 1 Class 6A tournament. Two years prior, the Jaguars had won their first district championship and played in Hershey for the PIAA Class 6A title.

This will be a big year for Springfield’s talented junior class. Guards Lexi Aaron and Mia Valerio, as well as forward Anabel Kreydt, were either starters or first off the bench on a team that finished 22-1. After losing Conran and Abbonizio, who is the program’s all-time leading scorer, the Cougars will be searching for plenty of offense. Aaron has the ability to shoot from long range and Valerio is a crafty point guard who has carved out a reputation for her strong on-the-ball defense.The 5-foot-10 Kreydt was the Cougars’ de facto big last year. She can score in the low post, rebound and defend.

Coach Ky McNichol, who enters her eighth season, is counting on junior guard Kaitlin Kearney and junior forward Taylor Hunyet to grow into starting roles after both saw sparse action off the bench last winter. Junior guard Sophia Ward will also be part of the rotation.

At Garnet Valley, senior guard Ava Possenti will be the focal point of a team that graduated seven seniors. Possenti flourished off the bench as a freshman during the Jags’ run to the PIAA Class 6A final. Since then, she has been the team’s best all-around player. Head coach Joe Woods, who begins his 19th season at GV, also expects contributions from senior Carly DiSabatino and senior forward Kaitlyn Dugery, who are tri-captains along with Possenti. Junior guard/forward Nicolette Saccomandi and sophomore forward Emily Olsen are returning players as well.

In addition, Haylie Adamski is a name to watch as the 5-foot-11 forward will play a significant role from the outset this season.

Here’s a look at the rest of Delco’s Central League teams:

Under fourth-year coach Lauren Pellicane, Haverford has been one of most well-coached and athletic teams in the league. Five key members from last year’s 10-6 team return, led by 6-foot-1 junior forward Caroline Dotsey, who has been one of the top bigs in the league since her freshman season. Junior forward Mollie Carpenter is as tall as Dotsey and will give the Fords a formidable low-post tandem that few teams in the league will be able to match. Senior guards Maddie Williams and Emma Rowland will run the back court and sophomore Anita Eberhart, who saw big minutes as a freshman, will play a hybrid role.

“Our biggest strength should be our size and ability to rebound the ball at both ends of the floor,” Pellicane said. “We are well-rounded in every position. We will go as far as our defense takes us. Offensively, improving from the outside and at the foul line will contribute to how successful we ultimately will be.”

Marple Newtown is in prime position to compete for the league championship after going 11-7 a season ago. The Tigers have experience on their side with four returning starters led by 5-8 senior forward Haley Levy, who has been the team’s best scorer since she arrived at the high school. Senior Nikki Mostardi and junior Mary O’Brien are back at their starting guard positions, while junior forward Brooke Impriano returns to the lineup. Levy, O’Brien and Impriano have started at MN since their freshman years.

“We are returning four starters, which helps,” sixth-year coach Ryan Wolski said. “We should be competitive, we just need to stay healthy.”

Penncrest has its third head coach in four years as Larry Johnson takes over the program. The Lions (1-13 last season) are one of the youngest teams in the county. They have six sophomores in Bailey Garrison, Kathryn Harding, Emily Huggins, Makayla Johnson, Kiera Costello and Addyson Bernhardt, three juniors in Kyra Curci, Chloe Griffiths and Ann Gladue, and one freshman in Alex Bruce. All will be leaned on to play key roles.

“We’re looking to continue to grow and learn as a team with the majority of players seeing significant time are juniors and sophomores,” Johnson said.

For the first time in 16 seasons, Radnor has a new head coach. Mark Jordan, who won a District 1 and Central League title during his 15-season run with the program, stepped down following last season. Rob Baxter, who had a successful run at Merion Mercy from 2008-18, takes over a Radnor team that is coming off an 8-9 season.

“Our season’s success will depend on how well we can stay out of foul trouble. We have a nice mix of experienced players with some younger girls,” Baxter said. “There will be a little learning curve with a new coach but we hope to put ourselves in position to compete for a playoff spot.”

One of the winningest programs in Delco over the past two seasons, Ridley looks to rebuild, but remain in the thick of things, after losing standouts Lindsay Boyd (Elizabethtown), Shannen Hinchey (Mansfield) and Kylie McNicholas (Ursinus) to graduation. Roe Falcone, a Delco Athletes Hall of Fame member, begins her third season as head coach of the Green Raiders, who went 12-4 last winter. The team is only two seasons removed from capturing the Central League title.

“We are a young team from an experience perspective,” Falcone said. “We are athletic and have players who are excited to step up.”

Strath Haven dealt with COVID-19 issues and managed to play only eight games last year, going 2-6. First-year head coach Christine Smith will take over on the bench for Allison Weiss.

Upper Darby is led by talented point guard Aubrey Ennis, who has started since her freshman year.

“Aubrey has great court vision, ability to get to the basket and can hit the 3, but it’s her defensive grittiness and willingness to share the ball that makes her a leader on the team,” coach Nick Liberio said.

Ennis is a co-captain alongside senior forward Alliyah Jean-Baptiste, a defensive-minded player with a quick first step. Senior guard Kareemah McCafferty will provide varsity experience and solid defense. The Royals were the only team in District 1 Class 6A that did not win a game last season. Liberio anticipates big improvements.

“(We are) healthier and more athletic than last year, positioning our team to play at a higher level and be competitive each game,” he said. “Defensively we will look to be more aggressive and leverage our length to create deflections and turnovers, which will enable us to also take advantage of our quickness to get the ball up the floor.   Senior captains Aubrey Ennis and Alliyah Jean-Baptiste bring skill and leadership … but for our team to be successful, we will need to outwork the competition on both sides of the floor.”