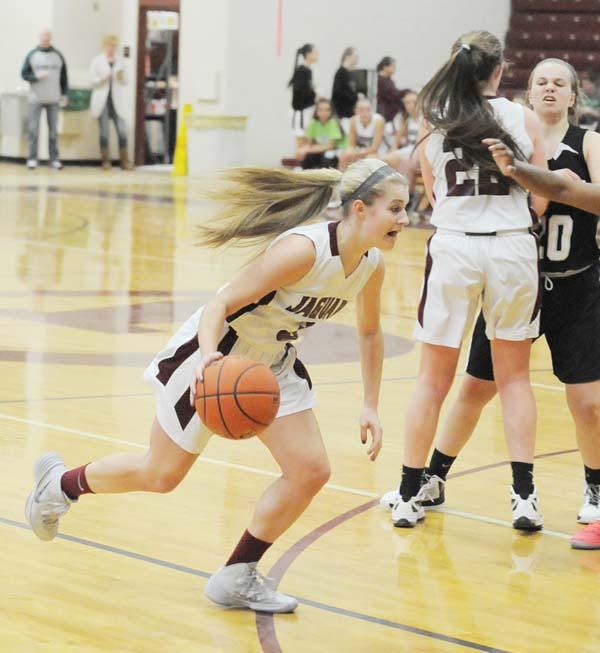 The Jaguars haven’t lost a Central League game since February 2013. They qualified for the PIAA Class AAAA tournament in back-to-back seasons and finished the 2014-15 campaign with the most wins in program history (25-4).

“We look forward to building on previous years’ successes, particularly with our younger players in the mix,” said Woods, who is beginning his 13th season. “Meeting the challenges that our league presents and qualifying for district and state playoffs are omnipresent goals that our group will work very hard to achieve.”

“We had a good season last year, but did not play well down the stretch when we needed to (and) fell short of our goal of (making the) Central League playoffs,” fourth-year coach Bridget DiCave said. “We’re excited for the season. We have a good group of freshman.”

Strath Haven’s Katie Fisher, center, goes up for a layup against Radnor last season. ne of the top returning scorers in the county, Fisher and the Panthers are considered one of the favorites in the Central League title race. (Times Staff/Tom Kelly IV)

Radnor pulled off one shocker after another in the District One Class AAAA playoffs last season. A year removed from a District One Class AAA title, the Raiders won all of their losers-bracket games on the road, including a stunning upset of No. 1 seed Boyertown. They fell to Cardinal O’Hara in the first round of states.

“Massimino and Lanzone … are both terrific athletes who are major factors on both ends of the floor,” Jordan said. “We might not win 20 games and four road playoff games, but we will improve as the season progresses.”

Bryant McCombs guided a retooling Ridley team to an 11-11 record last season, and the Green Raiders are poised to take the next step and contend for a Central League title this winter. They have all of their starters back in the fold, including captains Mel Malseed, Izzy Hamlin, Hanna Crowley and Hailee Mayer, as well as Dana D’Ambrosio.

With senior guard Katie Fisher and senior forward Rachel Vresilovic, Strath Haven is considered one of the favorites in the Central League title race under first-year head coach Allison Weiss, who was an All-Delco basketball player at Springfield in 2005.

Also set to begin his first season as a head coach is Ryan Wolski at Marple Newtown. Wolski was an assistant for Mike Colgan, who stepped down following a 16-6 season. The Tigers have big shoes to fill after the graduation of Rylee Power, a 1,000-point scorer and two-sport All-Delco, and forward Carley Hamilton. Senior guards Megan and Julia Lynch are MN’s only returning starters.

“We are a very young team,” Wolski said. “It will be a challenge early on to mesh, but if the girls continue to play hard and work together, we will surprise some teams.”

Springfield ended a six-win season on a strong note under first-year coach Ky McNichol, who believes her team is ready to compete for a Central League title. Senior forward Madison D’Ambrosio can work the post and shoot from long distance, and the Cougars also return senior Mairead McGillan, and juniors Amanda Hopkins (forward), Maggie O’Connell (guard) and Erika Biehl (guard).

“We have a number of good athletes playing basketball,” Higgins said. “If we make a commitment to get better as a team, we may be able to improve upon last year’s record.”

Preseason information on Upper Darby was not made available to the Daily Times.