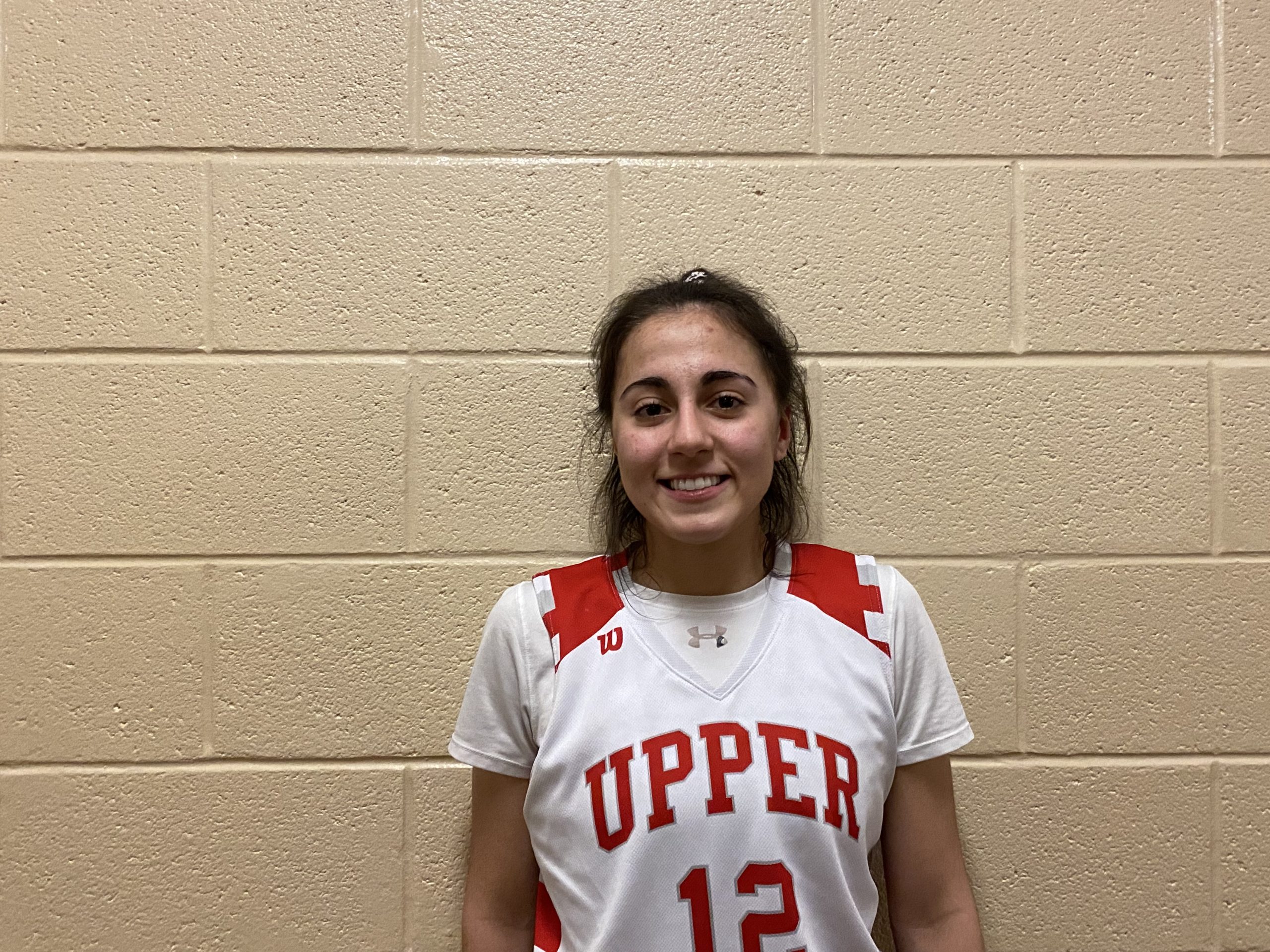 UPPER DUBLIN >> It was early in the second quarter of its District 1-6A tournament opener and the Upper Dublin girls basketball team was still stuck on just two points.

“It was weird,” Cardinals coach Morgan Funsten said. “And from my experience first-round games are scary. First round games are very weird sometimes.”

But after a 3-pointer from visiting Downingtown West’ Payton Forsyth gave the No. 20 seed Whippets a 12-4 advantage, the lid on the rim finally came off for UD.

The No. 13 Cardinals capped the first half with an 11-2 run to go into the break up one, scored the first seven points of the third quarter and proceeded to keep West in check to earn a 37-25 first-round victory Friday night.

“It felt like we came out a little rocky,” Upper Dublin sophomore Aditi Foster said. “We might have been a little nervous but I think towards the end of the first half I think we scored 11 points within the last two minutes and I think it was really just starting on defense. We had a couple stops on our press, a couple stops just on defense.”

Foster – a standout lacrosse player – flashed her talent on the hardwood in scoring six of her team-high 12 points in the third. Her putback in transition had UD up 17-14 and after a Geena Sarnoski three, Bliss Brenner found Foster alone inside for a layup and a 22-14 lead.

“As a team, I think we have really good energy,” Foster said. “At practices, just at everything we do. We have such good chemistry that if we start off bad we know we’re going to finish out well.”

“Aditi she’s such a great athlete and she’s such a competitor,” Funsten said. “She’s one of the best lacrosse players in the area, if not in the state and it’s been so much fun watching her improve throughout the season and she’s such a team player it’s really been fun to watch.

“And she had the opportunity tonight, earlier in the season other girls on the team would pick her up and I thought she did a great job tonight having an opportunity to pick them up.”

GIRLS #BASKETBALL: @udhs_athletics’s Colleen Klammer banks in a jumper from the lane off a Bliss Brenner inbounds pass for a 15-14 lead 2Q vs. Downingtown West. pic.twitter.com/9cKJIrnHA1

Sarnoski and Amy Ngo both finished with nine points for the Cardinals, who advance to visit No. 4 Pennsbury in the second round Wednesday. Winner clinches a PIAA tournament berth while the loser still has a chance at states through 9th-12th place playbacks.

“We’re going to have to find a way to grind it out on Wednesday,” Funsten said. “We know how talented they are, we’re really excited about getting a win tonight no matter what it looked like. We’ve extended our season at least two games and on Wednesday we hope to extend it even further.”

Lizzie Grant scored a game-high 15 points for Downingtown West (15-8), which was making its first district appearance since 2015.

After Forsyth’s 3-pointer made it 12-4 with 2:14 in the second quarter, the Whippets added just four more points to its total before the fourth quarter.

“Just from scouting them, they’re comfortable if they have some time to shoot the three, they actually prefer to shoot the three a lot,” said Funsten of Downingtown West. “I know that Grant, 15, hurt us down low. I thought she made some tough shots and also we made some mistakes on giving up some offensive rebounds but overall defensively I thought we did a great job especially on their first shot. It seemed like about half their points came off a second chance.”

The Cards finally changed the two under the name on the scoreboard with two Foster free throws at 5:47 in the second quarter. Forsyth, however, posted five straight points to have the Whippets leading by eight.

Ngo’s jumper above the foul line at 1:53 gave UD its second field goal of the half with Sarnoski’s trey pulling the hosts within 12-9.

“We know as a team, we know we’re good shooters and we know we can finish,” Foster said. “We can finish so I think it comes down to if we can’t hit on offense then straight to defense and just communicating and I think everyone communicated really well.”

A Grant bucket made it 14-9 but the Cardinals collected the half’s last six points. Klammer scored on a drive from the left corner while Foster added two more off a backcourt steal. Klammer gave UD a 15-14 lead by banking in a jumper in the lane off a Bliss Brenner inbounds pass.

“It was an ugly, ugly first half offensively for us,” Funsten said. “Just couldn’t make a shot. And, I mean, going into halftime you’d think our girls would hang our heads but we couldn’t. We had to be actually excited cause it felt like we scored like 10 points in the last minute and a half to avoid it being a total disaster in the first half.

“It was good that we were able to respond like that and I thought the key to the game was the first few minutes of the third quarter. And then defense kind of took over from there.”

A pair of Foster baskets sandwiched around a Sarnoski three made it 13 straight points and a 22-14 Upper Dublin lead.

Grant stopped the run but two Foster’s two foul shots later in the third and Sarnoski’s third and last triple in the fourth had the Cards up 27-16.

Kiersten Arrowsmith’s 3-pointer had the Whippets within 30-23 before Ngo knocked down both ends of a 1-and-1 with 1:52 remaining.

A Grant basket had Downingtown West again down seven at 32-25 but Ngo pushed the margin back into double digits by going 5-of-6 from the line.

Neshaminy avoids upset, fends off Owen J. Roberts in District 1-6A first round
The Reporter/Times Herald/Montgomery District 1 playoff preview for Feb. 22 and 23