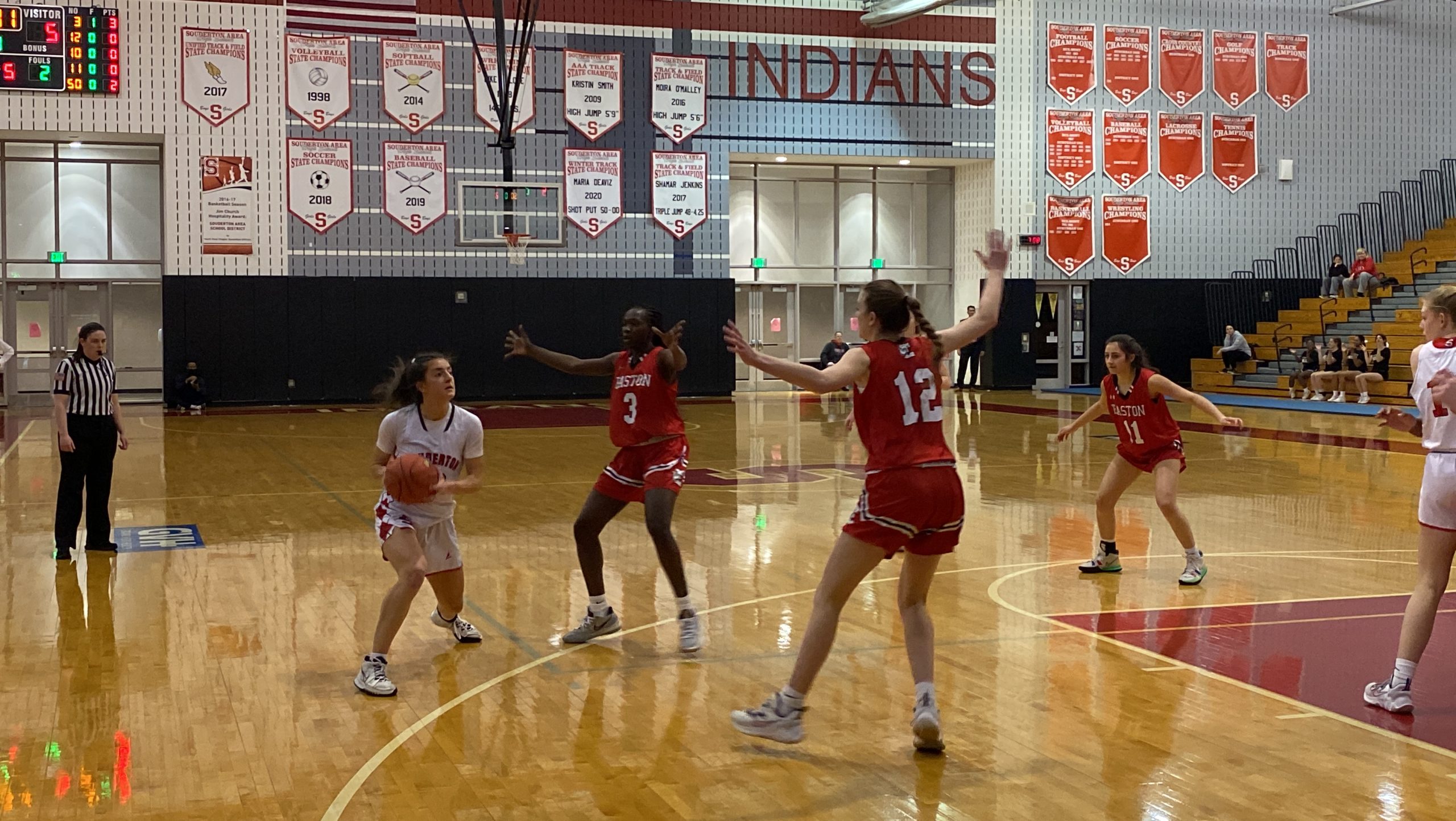 “They have size, they have length and we usually aren’t the best team against a zone,” Indians junior Casey Harter said. “So that combination just makes it really hard for us on offense. But we played well I think on offense. Some of the shots didn’t fall but we got as much as you could ask for.”

Souderton found enough scoring to stay even through three quarters but in the fourth the visiting Red Rovers came up clutch from long range to bounce Big Red from the state tournament.

Easton connected on a trio of 3-pointers in the final period – Kierra Smith banking in the last to put the Rovers up 36-31 with 3:04 remaining and held off Souderton from there to claim a 42-36 victory.

“Being patient offensively is not a strength of ours,” Indians coach Lynn Carroll said. “Not a style that we’ve been playing this year. And we knew we needed to do that tonight and I was very, very happy with how we did that. And we had a couple defensive breakdowns which I think was ultimately the reason that they won. Their kids hit shots and credit to them.”

Casey Harter had a game-high 15 points while Teya McConnaha added nine points for Souderton, which lost its third straight after reaching the District 1-6A semifinals.  The defeat is also the fourth consecutive for the Indians in the PIAA tournament, who last won in states in 2018.

“Part of what it tells us is, we can’t return the same team that we are right now, that’s everybody – that’s me and all the kids, we all have to get better in the offseason,” Carroll said. “The last few games that we lost were winnable so how do we win them next year when we’re in this same spot. We don’t want this feeling again, let’s prove it by what we do in the offseason.”

For the Indians, who did not have a senior on their roster, a season that included an 18-game win streak and claiming the SOL Colonial Division title ends with a final record of 23-6.

““We just were so close as a team and we wanted as much as we could for us as a team,” said Harter, who hit three 3-pointers. “And it’s sad to see it come (to an end) in the first round of states and just not being able to see each other every day is definitely going to be hard until next season.

“But we all also have to realize how much we’ve done this season, how proud we all should be of ourselves and that’s really something that is good for us to come back and get even better.”

Smith made three from beyond the arc in scoring a team-high 13 points for Easton (26-2), which earned its first PIAA victory since 2018.

“Shooting was going right for me for once,” Smith said. “I was off a couple games but kind of put those games behind me cause it’s like a whole new season basically and I just kept shooting and didn’t let my misses get in the way.”

Sara Tamoun and Anye’ Staton both had nine points as the Red Rovers, who came in third in District 11, advance to Friday’s second round to face District 3 runner-up Cumberland Valley, a 63-60 winner in double overtime over defending state champ North Allegheny.

A Smith layup off her backcourt steal had Easton up 37-35 late in the third before Souderton pushed the ball upcourt for a Grace McDonough jumper that dropped just before the buzzer to knot the contest after 24 minutes of play.

Evalyse Cole’s three hit the rim and fell in to put the Rovers up 30-27. A McConnaha breakaway layup off a steal had Big Red down one but Makenna Zimmerman’s triple from the top of the arc had Easton leading 33-29.

“A couple of those threes I think we could of defended a little bit better,” Carroll said. “They have four kids with 20-plus made threes on the season. That’s a ton of 3-pointers for a team to have and then obviously with Staton in the middle it makes it (that) you can’t guard all five positions one-on-one at times and they take advantage of it obviously which good teams do.”

Harter’s basket in the lane cut the margin to 33-31. After Souderton could not pull even on two possessions, Smith extended Easton’s edge to 36-31, taking a pass from Staton and putting her three from the right wing in off glass.

“I don’t mind banked threes,” Smith said. “A three’s a three. It goes in, it goes in. It felt nice though, it really got our pace going towards the end.”

Souderton went for a three and the tie its next time on offense but Big Red’s shot was short and Cole came up with the rebound. The Indians forced a turnover on an Easton inbounds but could not connect on a jumper.

After Smith hit the front end of a 1-and-1 to make it 37-31 with 1:40 left, McConnaha scored following her offensive rebound to have the Indians down four.

A Smith free throw with 44.0 seconds had the Red Rovers up seven before Harter hit a 3-pointer but those were the Indians’ final points.

Facing a 2-3 zone anchored in the back by a 6-foot-2 Zimmerman, a 6-foot Staton and a 6-foot-2 Cole, the strategy for Souderton was maintaining composure on the offensive end until a scoring opportunity presented itself.

“We watched a ton of film, what we saw was the more patient you are the more things open up along the baseline,” Carroll said. “And I think we did see that when we got the ball to the short corner, we were getting good looks from the short corner, short jumpers Teya and Grace. It’s not easy to get it there through their lane but we know if we were patient enough that we could get it there.”

A McConnaha basket had Souderton up 7-5 before the teams ended the first quarter tied 7-7 after Cole scored off a Staton assist and drew a foul at 1:05.

Harter started the second quarter with a personal 7-0 run –a layup off her steal, banking in a 3-pointer then getting another shot to drop to give Big Red a 14-7 advantage.

“Defense really turns into my offense,” Harter said. “So when I get the steal and finish it, it’s really motivating and I feel like it just keeps energy up and makes the intensity higher.”

An Erin Bohmueller three had Souderton again up seven at 17-10 before Easton collected the first half’s final five points to make it 17-15 at the break.

Harter started the third with a 3-pointer but the Red Rovers answered with a 7-0 burst, Staton scoring the last four to give the visitors a 22-20 edge. After McConnaha trey made it 23-22 Souderton, Staton drained a three to put Easton back ahead by two.

A McDonough basket evened things at 25. After Smith’s steal and layup, McDonough’s last-second jumper tied it once more at 27 going to the fourth.