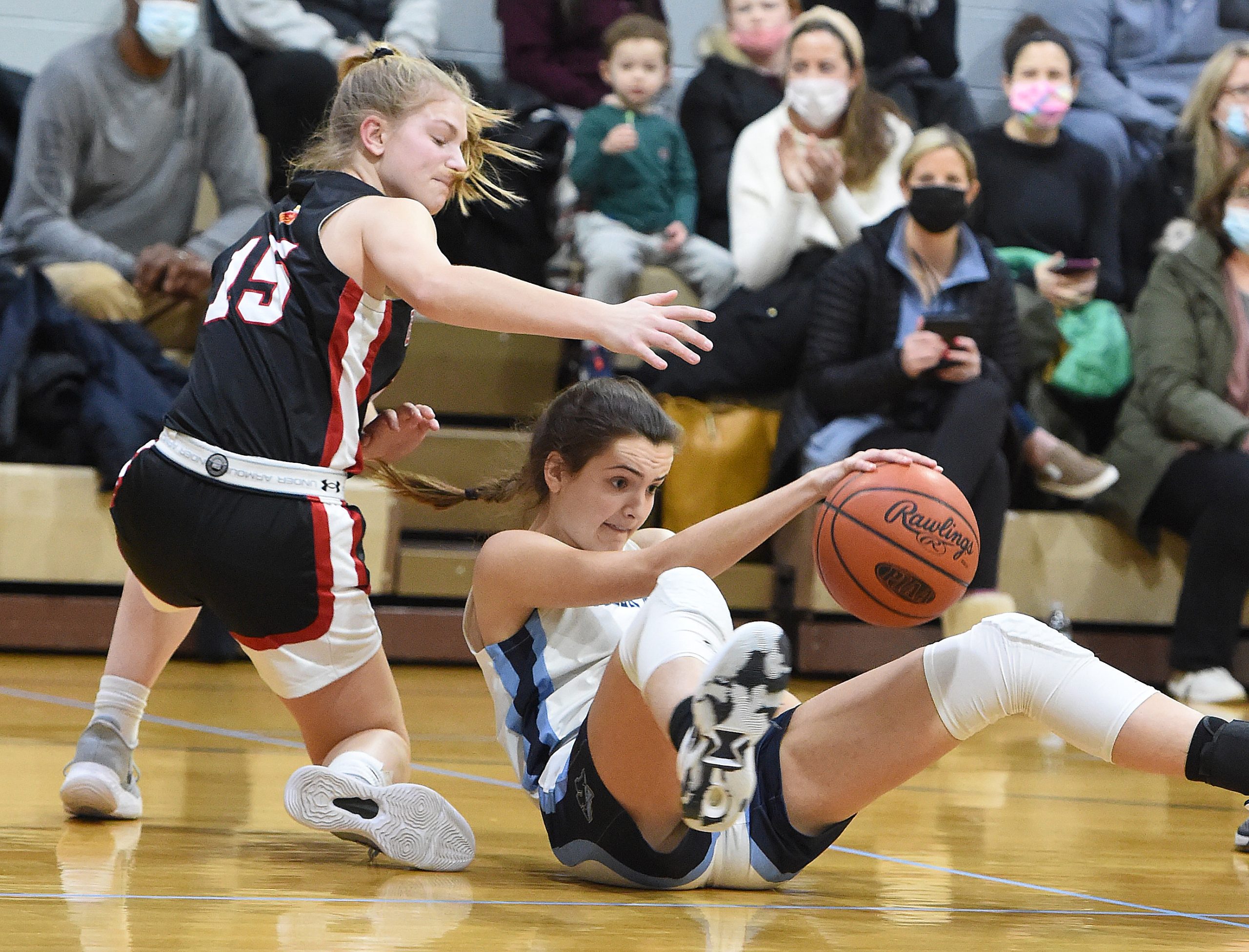 ROYERSFORD >> Just four days after capturing the PIAA District 1 5A girls basketball title, Villa Maria lost to West York, 45-37, in the opening round of the PIAA 5A state tourney Wednesday at Spring-Ford High School.

The Hurricanes held an 18-9 lead with two minutes to go before halftime, but an 8-0 run by the Bulldogs just before halftime put West York, the seventh-place finisher in the District 3 5A tourney, back into the game.

Then, going into the final quarter, Villa Maria trailed by a point (27-26) but West York (17-9) gradually pulled away for the victory, ending the Hurricanes’ season.

“I’m really proud of our team overall but I’m very disappointed today because I don’t think we put out our best effort today,” said Villa Maria Academy head coach Kathy McCartney. “We didn’t play real well but that’s not to take anything away from West York – they played very well and made big shots when they had to, they were organized on offense. We didn’t play up to our abilities and that’s tough for the last game, you’ve got to wait 365 days to get that (bad) feeling out of your stomach.”

McCartney spoke of the unique challenge that the Hurricanes’ emotional district championship victory March 5 presented to the youthful Villa Maria squad in the days leading up to the state tourney opener.

“I think the first round is a hard game – I’ve won a lot of first-round games, (but) we were coming off a district championship, and there’s this euphoria about winning it, and it’s hard to get the kids back (on track), and we didn’t recover from that,” said McCartney. “I’m hoping, like I am after every loss, that we’re a little smarter for it, and we take that into next year.

“We have nearly everyone on this team back again next year – MG Murphy is the only senior that gets a lot of playing minutes. But like I said, you’ve got to wait a long time until next year.”

Villa Maria started Wednesday’s contest slowly, and the Hurricanes did not connect on a single shot for the first 4½ minutes. But a basket from sophomore guard Carly Catania triggered an 8-0 run that gave the Hurricanes an 8-4 lead by the end of the first quarter.

The Hurricanes’ 5-11 junior forward Marah McHugh, who has been Villa Maria’s leading scorer this season, connected on four baskets from various spots in the first six minutes of the second quarter, giving the District 1 5A champions an 18-9 lead.

But West York, led by some sharpshooting from senior T’Azjah Generett (who finished with 19 points) cut the Hurricanes’ lead to 18-17 by halftime.

In the third quarter, West York went ahead 27-24 after connecting on a couple of treys. Then, the Bulldogs turned the ball over three consecutive possessions, but each time Villa Maria missed their ensuing shot.

The Bulldogs held a 27-26 lead heading into the final quarter, and never relinquished the lead the rest of the way. A couple of Hurricane missed layups were followed by quick West York baskets, and with six minutes to go, Villa Maria trailed 34-26.

Catania and junior guard Ava Irvine hit treys to keep the Hurricanes close, and with three minutes to play, Villa Maria trailed by just one point (36-35). But, in the final three minutes the Hurricanes scored only two points (a putback by junior Ella Iacone with 1:11 left), while West York capitalized on some Villa Maria foul trouble with a couple of baskets underneath and five free throws for the 45-37 win.

Four Hurricanes entered the scoring column Wednesday — McHugh (15 points), Catania (9), Irvine (7) and Iacone (6). The Hurricanes finished the season with a 14-12 record, which included a five-game losing streak in early January.

McCartney paid tribute to the Hurricanes’ resilience during the 2021-2022 season, particularly during that five-game skid.

“This season, we had a very gutsy team,” said McCartney. “We had a lot of ups and downs, and I think the mark of a champion is to come back, and we did that this year – we just didn’t do it tonight.

“You can lose a team when they lose five games in a row, but they came back and that’s a credit to our senior leadership – if you had walked into our practices then, you wouldn’t have known that we were on a five-game losing streak. They just kept battling, came back and finished the season strong.

“We had one senior starter [Murphy] and three great seniors on the bench (Maggie Kenny, Julianna Bailer, Natalie Bacallao). They were great on our white team at practices, they worked hard every day and they were good models for our underclassmen.”

Even though Wednesday’s loss stung, McCartney hopes that the defeat in the state tourney will be a learning experience for the returning Hurricanes next winter.

“Playing in a state game is always a good experience,” said McCartney. “You grow from it and you learn from it, and it should make us better next year.”