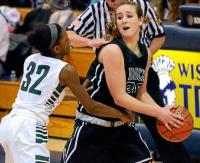 When the teams met a second time, the Knights were on a better track for success. On Jan. 16, they claimed a 46-35 win for their third of 13 consecutive victories.

Dock and DC are Bicentennial League rivals set to clash for a third time. The rubber match will take place in the District One Class A semifinal round Wednesday at Cheltenham High. Opening tip is scheduled for 6 p.m.

The No. 2 Knights (19-6) are considered the slight favorite over the sixth-seeded Pioneers, but both teams know each other well and should expect no surprises.

“This time of year it comes down to turnovers, foul shooting, rebounding and defense Those things are truisms for pretty much everyone,” DC coach Mark Weaver said. “With Dock they usually play a 3-2 (defense) and they have some pretty rangy and athletic girls that play up top in the zone. They like to play the passing lanes and go the other way, that’s pretty much their M.O. They have a couple good shooters and rebound the ball pretty well. We’re going to have to play well in every aspect of the game.”

Sophomore forward Shirley Piotrowski scored 20 points and senior guard Siani McNeil, the two-time league MVP, tossed in 14 to lead the Knights past No. 7 Friends Select, 59-40, in the quarterfinals. Delco Christian is 14-2 over its last 16 games.

With her athletic, 5-11 frame, Hunsberger presents plenty of matchup problems. The same could be said for McNeil, who is averaging 17.6 points per game, and is one of the most dynamic players in the county.

“It will be a tough task,” Weaver said. “When you get to the semifinals it’s supposed to be tough, but I’m confident we can do the things we need to do to advance.”

After a pair of convincing victories over No. 30 Oxford and 14th-seeded Spring-Ford, the Jaguars (23-4) slipped up in their quarterfinal round game with No. 6 Upper Dublin, falling 35-28.

The good news is the Jags are not in do-or-die mode. With a spot in the PIAA tournament locked up, the Jags are looking to earn third place in the tournament.

Garnet Valley features seniors Maddie Ireland, a 1,000-point scorer, and Sam Tomasetti. Sophomore guard Nicole Barnes and freshmen Emily McAteer — who has a pair of 20-point-plus games in districts — and Brianne Borcky round out the Jags’ starting lineup.

Conestoga (20-6) dropped a 57-46 decision to No. 2 Perkiomen Valley (25-2), which was led by KT Armstrong’s 26-point performance. Armstrong’s effort overshadowed the brilliance of Conestoga’s Ellie Mack, who carried the Pioneers with 25 points.

It’s the third time the Jaguars and Pioneers have met this season. The Jags won both meetings, including a 56-50 decision Jan. 29.

The Patriots (18-7) are one win away from clinching a berth in the state tournament. A victory would put them in the 9th-place game for states. The top 10 places qualify for the  PIAA tournament.

Despite their low seed, the Pats have now earned back-to-back home games in the playback round. They claimed a 48-39 win over 24th-seeded C.B. East last Friday, as All-Delco Dahnye Redd scored 17 of her game-high 27 points after halftime, to go with 11 rebounds. Carle Andrews added 10 points and five assists, while Joy Morton chipped in nine rebounds, three assists and two steals.

C.R. North pulled off one of the biggest stunners of the district tournament, disposing of No. 4 Mt. St. Joseph in the first round of playbacks. Mackenzie Tinner led the way with 16 points and 10 rebounds.