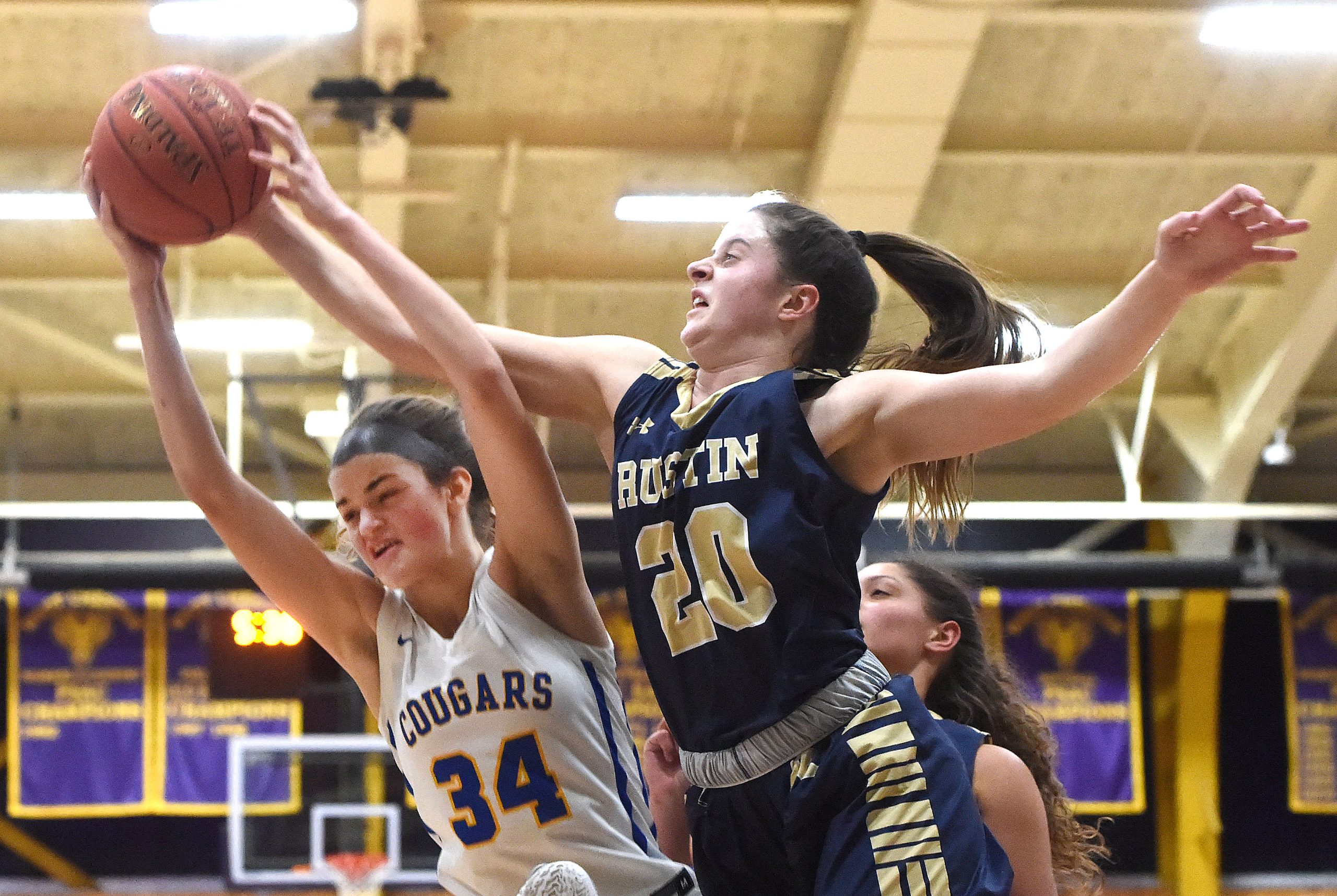 West Chester >> Defense and depth have been two keys to the West Chester Rustin girls basketball team’s success this winter, and both proved particularly valuable for the Golden Knights in the Ches-Mont League championship final Tuesday evening at West Chester’s Hollinger Field House.
Coming into Tuesday’s Ches-Mont championship final, the Golden Knights had held opponents to 40 points or fewer in 12 of their last 13 games, while compiling a 12-1 record during that stretch.

In Tuesday’s championship contest, Rustin’s tough defense limited perennial Ches-Mont power Downingtown East to 28 points in the first three quarters, building a 38-28 lead early in the final period.
“Our focal point with this team has been committing to rebounding, and taking away second and third opportunities for [opposing] teams, capitalizing on it and transitioning out of that because a lot of our game is fast break,” said Rustin head coach Lauren Stackhouse. “With this group [of ours], they like to run, they like to play fast, so we try to take advantage of teams that play a slower pace. It’s not just one person for us who carries the load on defense, it takes all five.”
When Downingtown East, gunning for its third Ches-Mont tournament title in four years Tuesday, limited Rustin star Laine McGurk to a dozen points, other Golden Knights picked up the scoring. Laine’s twin sister Elizabeth tallied 13 points, and Lola Flynn chipped in with 14 points in Rustin’s 46-42 victory.

“That’s what makes us tougher to guard – you never know whose turn it’s going to be, who’s going to step up that night,” said Stackhouse. “Our teammates rally around each other, they rally around Laine, and they all know their job, they all know their role, and they all embrace it – that’s what’s great about this team. Give credit to Downingtown East – they played tremendous defense on us, they did a great job defending Laine, and they’re a very well-coached team for sure.”
Elizabeth McGurk said, “Our coach has prepared us for [situations] when Laine gets shut down. We knew that could happen, so we were putting everyone in different spots, like when I was put in the middle of our zone offense to try to open things up and draw fouls.”
“Elizabeth really stepped it up in the middle tonight,” said Flynn. “And I think our defense won the game. It meant so much to beat Downingtown East, our biggest rival. They’ve won it so many times.”

“We really wanted this one, on both ends of the court,” said Elizabeth McGurk. “It feels so good to see all of our hard work paying off.”
Flynn smiled and added, “When the game ended, I wanted to give all of my teammates a big hug. And our bench was so important to our victory – I think our bench [players] are going to have sore throats tomorrow, all the vocal support they gave us.”