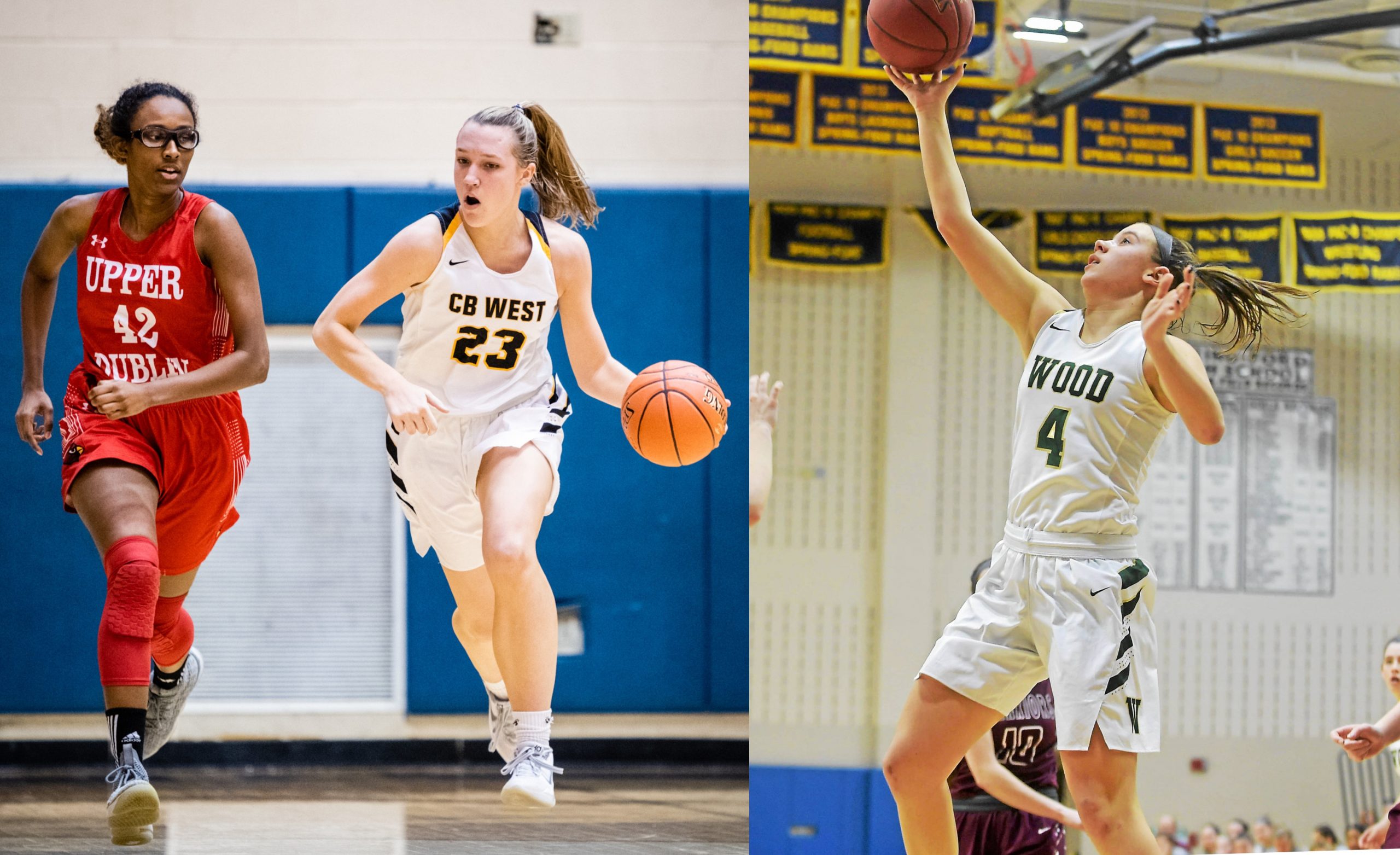 Central Bucks West's Maddie Burke, center, and Archbishop Wood's Kaitlyn Orihel, right, were named Class 6A and 5A Players of the Year on the PA Sportswriters' All-State Teams. Upper Dublin's Jackie Vargas, left, was a 6A first team choice, her third time on the team.

Maddie Burke doesn’t usually let out a ton of emotion on the basketball court, but she couldn’t hide the excitement over the news she got Sunday.

The Central Bucks West senior sharpshooter got the perfect send-off to her high school career when she was named the PA Sportswriters’ All-State Class 6A Player of the Year. Burke has been an all-state selection before, but being named the states’ top player is something she’s taking great pride in while not forgetting her teammates’ role in helping her do it.

“I’m just so happy. It’s amazing to make all-PA, then to be player of the year, it’s crazy,” Burke said. “I couldn’t have done it without my teammates, Coach (Zach) Sibel and (assistant coach) Jen (Fabian). I was just excited and happy to hear that. With everything going on, I’ve been so focused on the quarantine and thinking about the next step and it was just an honor.”

Kaitlyn Orihel is bit more expressive on the floor but the Archbishop Wood junior admitted it was a different kind of elation when she found she had been named the Class 5A Player of the Year.

“I was so excited. It was a goal of mine at the beginning of the year but once the season started, I didn’t think about it as much,” Orihel said. “With all the great players in 5A we play against, our last game was against Peyton McDaniel (of Twin Valley) and with all the other great teams, it’s such an honor and I was so excited.”

Burke and Orihel led a strong component of local players on the 6A and 5A all-state teams released Monday afternoon. Usually, all six classifications are released on the same day but due to the cancellation of spring sports, the remaining classifications will be released Tuesday (4A and 3A) and Wednesday (2A and A).

A second team all-state selection as a junior, Burke helped elevate the Bucks to their best season since 2014-15 as West captured SOL Continental, SOL tournament and District 1 6A titles before falling in the second round of the state tournament. The Penn State recruit finished with an average of 12.4 points per game, but that far from sums up what she brought to the Bucks on a nightly basis.

Aside from her lethal shooting, Burke was the team’s top rebounder and showed a knack for shot-blocking since her freshman year. She also wasn’t hesitant to hit the floor, twice making diving steals in key spots during the district tournament without second thought.

“I’m more focused on the team winning than stats and stuff, so it’s an honor that people acknowledged that,” Burke said. “We became really close as a team this year; it’s probably the closest team I’ve been on. We built a level of trust and had a really good bond which I think helped me and everyone on our team to play with the confidence that led to a lot of success.”

Downingtown East’s Smuda, a 6-foot-5 center and Liberty recruit, posted 18.9 ppg while helping the Cougars to the PIAA tournament while routinely posting double-doubles. Olsen notched 19.3 ppg as a dynamic point guard for the PAC champion and PIAA-qualifying Rams while Vargas, a 6-foot-3 center heading to Lehigh, averaged 12.7 ppg and anchored another stout Cardinals defense.

Central Bucks East junior Emily Chmiel, a 6-foot forward, was named to the second team after averaging 18 per game and helping the Patriots to the state tournament.

A pair of talented sophomores earned their first all-state selections on the third team. Cardinal O’Hara guard Sydney Scott and her 12.0 ppg give the Lions their first all-state pick since 2017-18 and Pennsbury’s Ava Sciolla makes her first appearance after post 14.5 ppg and helping the Falcons to the District 1 title game. O’Hara and Pennsbury were slated to meet in the PIAA quarterfinals prior to the state tournament being cancelled due to the COVID-19 pandemic.

Burke gives the Bucks a first-team selection for the first time since 2014-15 when Nicole Munger was selected in the old Class 4A. Munger, who also left West for the Big Ten at Michigan, and her teammates left an impression on Burke and her classmates and remained a standard they tried to live up to.

“Especially at a younger age, I was more immature and would almost be scared — ‘I have to go and do this’ – but at the end and by senior year, it’s all about helping your teammates and doing whatever you can to win,” Burke said. “I looked up to the seniors in the past and how they carried themselves, they had a confidence, so learning from that and even AAU just talking to people about how they carried themselves so their team could be successful helped a lot.”

Orihel has been no stranger to the all-state list since she arrived at Archbishop Wood. As a freshman, she was named third team before jumping up to first team last year. One of two underclassmen on this year’s 5A first team, she narrowly edged Chartiers Valley senior Meg McConnell and Twin Valley senior Peyton McDaniel for top honors.

The junior, who played the first month of the season on a fractured kneecap, likewise chalked her success up to a team effort. Orihel posted 15.1 ppg, although her scoring had ticked upward late in January after she had taken some time to let her knee injury heal.

“It was in the back of my mind that it would affect me longer than it did but once I was over that and once I healed, I felt a lot more comfortable,” Orihel said. “Being first team as a sophomore puts a little bit of a target on your back, but I try not to think about it during the games and during the season. I focus on the team and what we have to do, not that kind of stuff.”

Archbishop Carroll senior Erin Sweeney, a second team all-state pick in 5A last year, joined Orihel on the first team this season. A Drexel-bound guard with a smooth offensive game, Sweeney posted 15.4 ppg after shaking off an early-season ankle sprain to play her best basketball when the season ended.

Ironically, Wood and Carroll had been paired in the 5A quarterfinals for a second straight season prior to the tournament’s cancellation.

Rounding out the first team with McDaniel and McConnell was McConnell’s teammate from unbeaten Chartiers Valley in sophomore Aislin Malcolm.

Wood’s prolific 3-point sniper Ryanne Allen made her first appearance on the all-state list, earning second team honors after posting 15.3 ppg while shooting better than 40 percent from beyond the arc.

The last local honoree is also a first-time selection in Mount Saint Joseph junior Grace Niekelski. A versatile 6-foot wing, Niekelski was named to the third team after posting 15.6 ppg, scoring her 1,000th point and helping the Magic to the AACA title game and PIAA tournament.

Orihel becomes Wood’s third Player of the Year since 2015-16, joining Bailey Greenberg and Katie May. Both Greenberg (2016) and May (2018) earned the honor as seniors, while Orihel is the first to do so as an underclassmen and acknowledged it will only add to the target on her back next season.

“It’s honestly my favorite thing, I love it,” Orihel said. “That level of competition, it’s like people are almost coming for me and it’s so exciting, I really do love it. I take it as a challenge too, I try to focus on doing what I do and not let them get to me because I know their goal is to get to me and get in my head. I just want to play my game.”

Burke leaves West confident the program will continue to strive to that same standard and is excited to see what the returning players can do next year. As the season went along and the gym started to fill for every home game, she also recognized there were plenty of kids in the stands in the same spot she had been watching in 2014-15.

“There always a bunch of little kids at our home games, they would come up to us and ask to get a picture and it was just really cool that they looked up to all of us and how big a role we had in their lives,” Burke said. “I want that to keep going at West, to keep having the players motivated to go after those type of things.”

Orihel’s already built an impressive resume at Wood, but there’s two main things lacking from it in a PCL title and state championship. It’s a fact not lost on her either and Wood coach Mike McDonald slipped in a reminder as a little motivation when he broke the news of Orihel’s player of the year selection.

“I’m appreciative of it but I’m not taking it for granted, I still have to keep working and there are things we want to accomplish next season,” Orihel said. “(McDonald) told me ‘there’s just one more thing to add to your resume and that’s championships.’

“It’s a great honor, this is by far my favorite season I’ve had with Wood and this just makes it even better.”

The 2019-20 Pennsylvania Sports Writers Class 6A and Class 5A All-State Girls Basketball teams, including each player’s school, height, class and scoring average.