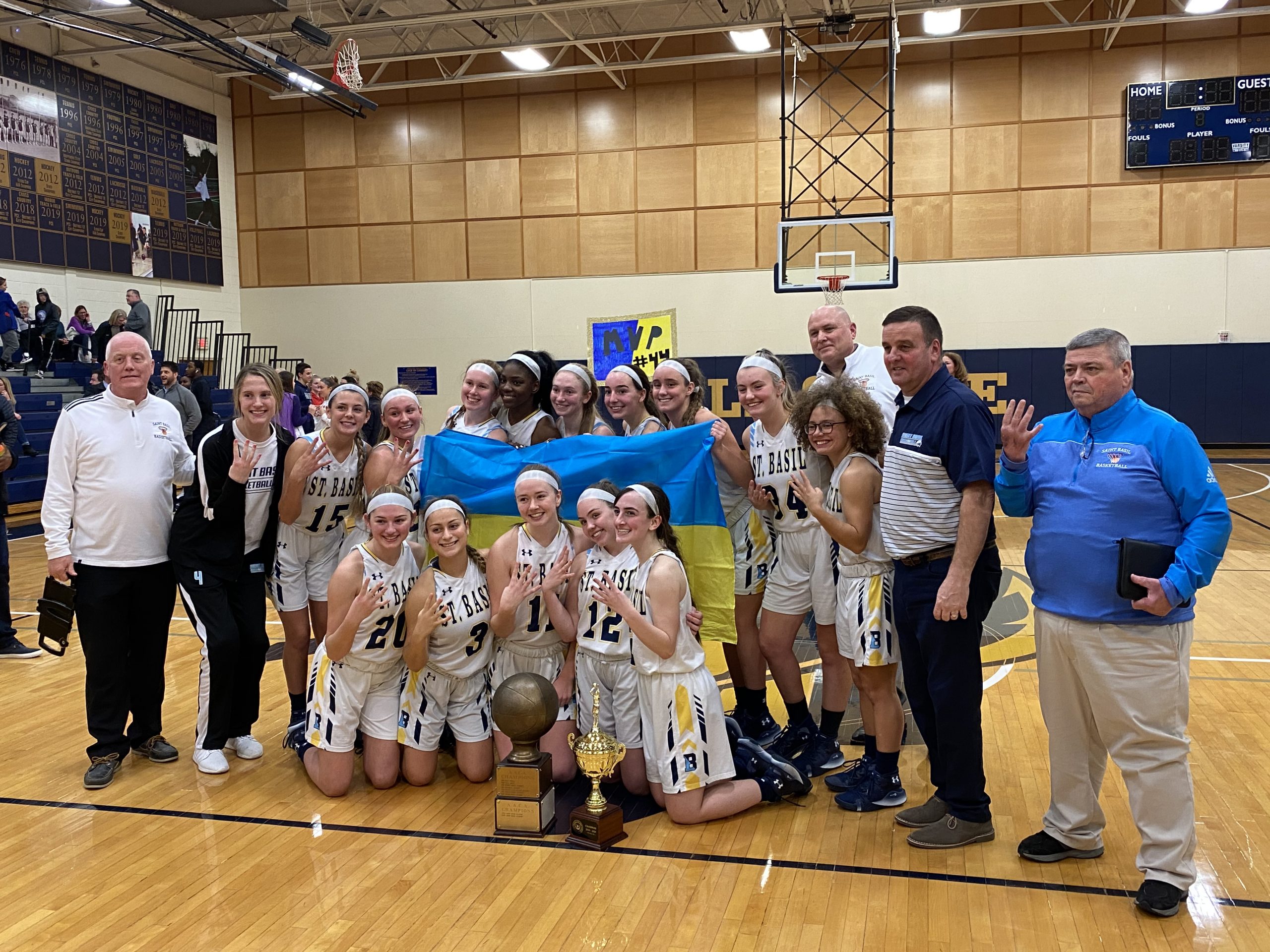 The St. Basil girls basketball team poses for a photo after its 57-41 win over Mount St. Joseph in the AACA championship game on Wednesday, Feb. 12, 2020. (Mike Cabrey/MediaNews Group)

SPRINGFIELD >> Denae Carter intercepted a Mount Saint Joseph inbounds pass and raced down the court for a layup just before time expired in the third quarter, the effort prompting the St. Basil student section to erupt into a boisterous “MVP” chant for the Panthers junior.

“It was great, it kept our momentum going I think,” Carter said. “I think the fans in our student section – it’s never been that big.”

On the court Carter and the St. Basil girls basketball team made it loud and clear they remain the top program in the AACA. Carter scored a game-high 28 points as the Panthers claimed their fourth consecutive league championship with a 57-41 victory over Mount St. Joseph Wednesday night at La Salle College High School.

“I feel like it’s a great statement for our school,” St. Basil senior captain Kelly Grant said. “And then all the girls on the team who worked so hard every day at practice, I feel like it’s a good reward for all of our hard work.”

The St. Basil girls basketball team takes a picture with its student section after the Panthers defeated Mount St. Joseph in the AACA final on Wednesday, Feb. 12, 2020. (Mike Cabrey/MediaNews Group)

Grant scored eight of her 11 points in the first half while Riley Scannell – stepping into the lineup after Samantha White was injured in practice Tuesday – added another 11 points as the Panthers (22-2) jumped out to a 20-10 lead after a quarter and never let the Magic offense get in a rhythm as St. Basil won its 15th straight game.

“We felt that our experience being here for the fourth time that if we got out on them early that it would help us,” St. Basil coach Terry Mancini said. “You could see their inexperience in some of the things that they did. We thought that was one of our keys and I thought we did a real good job Saturday (against Villa Maria in the semifinals) too of jumping out early and today.”

Lauren Vesey posted a team-high 12 points while Grace Niekelski collected 11 points for Mount St. Joseph (17-7), which had a five-game win streak snapped and lost its sixth straight meeting with St. Basil. The Magic were making their first AACA final appearance since 2016 and were looking to earn their first tournament title since 2015.

“It’s great to get to the game, it’s better to get to the game and win it but there’s a lot to be learned here,” Mount first-year coach Matt Feeney said. “That team is good at teaching you lessons. We’ll look at film, we think know where the game got away from us and we’ll be a better basketball team coming out of this.”

GIRLS #BASKETBALL: @stbasilbball’s Denae Carter steals an inbounds pass then dashes down the court for a layup in the final seconds 3Q vs. Mount St Joseph, sending the St. Basil student section into an “MVP” chant. pic.twitter.com/orQwndM5aF

Both teams now get ready for their respective District 1 postseasons. Mount St. Joseph is the fifth-seed in the Class 5A tournament and hosts No. 12 Harriton Tuesday. St. Basil is the top seed in Class 3A and is home against No. 4 MaST Charter in the semifinals Wednesday.

St. Basil has been simply dominant during their fourth-year run of AACA titles. The Panthers have won 42 straight league games and have gone 59-2 in Catholic Academies play during the four-peat.

“It feels great,”  Carter said. “We have a lot of energy, we play hard every time we’re up here. It’s just a really good environment to play in, we have our fans to back us up, we have our teammates and our coaches especially.”

Carter picked up her second foul at the at the 2:37 mark of the first quarter but was back on the floor before the period’s end – adding a bucket to the Panthers’ 7-0 run that had them leading by 10 heading to the second quarter.

“It’s kind of an Achilles’ heel for us but we’ve done it all year,” said Mancini of getting into foul trouble. “If it hasn’t been her, it’s been Lizzy Deal so we lose a lot of height with them two off the floor. Not only Riley stepping up all year, Hannah Hunter came off the bench and gave us good minutes in both games this week. “

The Panthers took a 30-17 lead into halftime and in the third Carter was the catalyst for more separation from the Mount – recording 10 of St. Basil’s 17 points in the quarter.

“You kind of look at like she got the MVP, she knew her role in this game and I feel like she did that really well,” said Grant of Carter.

Carter scored the Panthers’ first four points in the third then found Scannell upcourt for a transition layup for a 36-19 lead. A Niekelski bucket had the Magic within 15 but St. Basil posted the next five – Grant banking in a runner for a 41-21 lead.

“I think just as a team we took our time on shots and it allowed us to get the open looks,” Carter said. “We did a really good job of making the extra pass and finding the open lane. And we definitely ran in transition pretty well. We passed the ball very well too.”

A Carter putback had St. Basil back up 20 at 43-33 with Scannell scoring inside off a Shannon Remolde assist for a 22-point advantage. Mount had the margin down to 45-27 before Carter’s steal and score in the final seconds made 47-27 going to the fourth.

“I know people look at our league as not as strong as maybe like the (Philadelphia) Catholic League but we knew that it was going to be a really tough game,” Grant said. “I feel like we really kept our composure and played a really good game.”

The Magic had some success with their press in the fourth, scoring the quarter’s first five points to make it 47-32 after a Vesey basket off a backcourt steal. But Carter drove three-quarters of the court for two to put the Panthers back up 17.

A Niekelski 3-pointer – the Mount’s lone triple of the night – had the Magic within 52-41 with less than two minutes remaining but that was as close as it got, Scannell and Carter each hitting two at the line to extend St. Basil’s lead to 56-41 with 53 seconds left.

In the first quarter, back-to-back buckets from Scannell and Grant had St. Basil up 12-6. Mount was within 13-10 after a Kelly Rothenberg free throw at 1:47 but Scannell’s three-point play at 1:28 following by two each from Carter and Deal had the Panthers leading by 10 after eight minutes.

“We actually wanted to score off transition more and weren’t able to do so which is a credit to them,” Feeney said. “We talked about it from the opening tip, ‘let’s speed the game up’ and we didn’t do a good enough job of it but again, they had a lot to do with that.”

The Panthers pushed their advantage to 14 at 26-12 after two Grant free throws with 2:50 left in the second quarter. Three straight points from Vesey made it 26-15 before Maria Storck drained a three off a Remolde assist to put St. Basil back up 14.

After a Niekelski bucket, a Grant foul shot at 7.1 seconds sent the Panthers into the break leading 30-17.