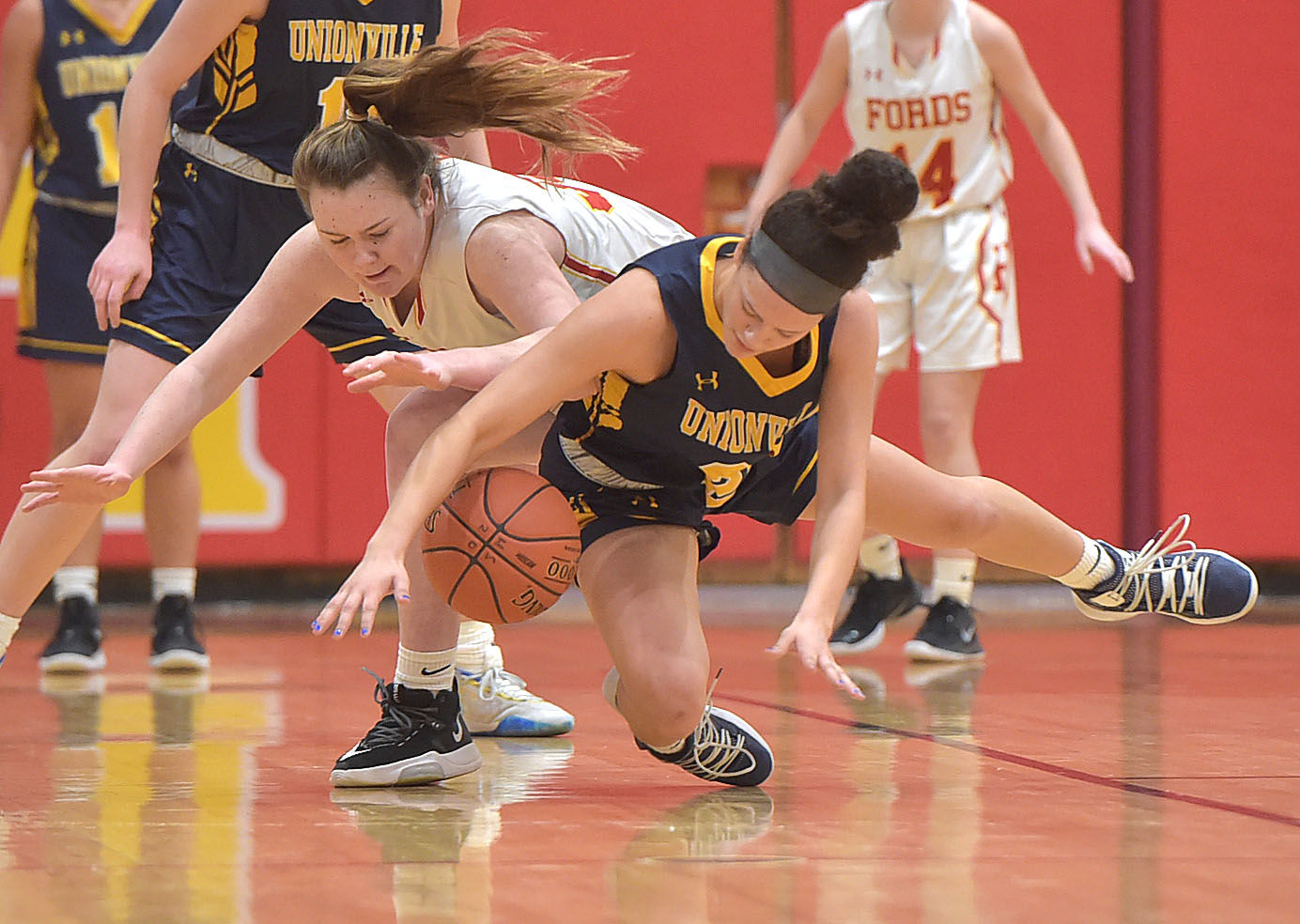 Haverford's Mollie Carpenter and Unionville's Alexia Brown vie for a loose ball Friday night in the district opener between the teams.

HAVERFORD — Mollie Carpenter provided a big boost for her team in the fourth quarter of a District 1 Class 6A tournament first-round game Friday night.

The freshman forward came up with a steal and scored a pair of baskets to help No. 16 Haverford close out 17th-seeded Unionville, 42-30.

The Fords (16-9) travel to No. 3 Plymouth-Whitemarsh in the second round Wednesday at 7 p.m.

“Mollie is a 6-foot, physical freshman. That’s what she brings for us,” Haverford coach Lauren Pellicane said. “She might be our best rebounder. She sees the basketball real well and she gives us second opportunities with layups. Any time you can get those opportunities it’s a big bonus.”

Carpenter is one of Pellicane’s trusted go-to players off the bench, alongside guard Maddie Williams and forward Hannah Clancy. The trio combined for 12 points, three rebounds and a steal.

Carpenter shined the brightest in the final stanza. She finished with six points, two rebounds and a steal. Williams chipped in by making a clutch 3-pointer in the fourth period.

“Every game I feel like I have to be ready and prepared to come out and play good D and get rebounds,” Carpenter said. “Especially as the year has gone on, I have felt more comfortable with securing (the ball) and going up to score. I have been working on it a lot.”

Haverford’s Addison Brodnik goes up for two of her eight points in Friday’s District 1 Class 6A tournament win over Unionville.

The Fords defeated the Indians for the second time this month. Haverford used an 11-1, fourth-quarter run to beat the Indians on Feb. 1. On Friday night, they ended the Indians’ season thanks to an 18-5 surge in the final eight minutes.

“We really wanted it tonight,” Carpenter said. “In the beginning of the year, it was almost like we were looked down on by a lot of other teams because nobody really expected us to be good or expected us to be here (in the district playoffs). Coming in tonight, we just knew we had to really step up and come out and play together.”

After graduating five seniors from last year’s crew, they have started three juniors, one senior and freshman. The lone fourth-year member on the team, Katie Redding played outstanding at point guard and hauled in a handful of tough rebounds.

The Fords’ best scoring threat is junior Chiara MacGillivray, who battled through some shooting struggles Friday to lead the team with 12 points. She began the game at the free-throw line due to a technical foul (scorebook violation) that was called on the Unionville bench.

MacGillivray made only two field goals, but was a perfect 8-for-8 at the line.

“I think you could tell at the beginning of the game that we were really jittery, but it was definitely a moment we worked hard for throughout the whole game and we got it done,” MacGillivray said.

Unionville went on a 6-0 run in the first quarter to take its largest lead at 16-12. Dynamic junior guard Emma Dempsey was a problem in the early going, scoring six of her 10 points in the opening quarter. Junior forward Alexia Brown also gave the Fords fits as she tallied a game-high 13 points to go with seven rebounds and two steals.

Dempsey was held scoreless after intermission, while Brown had five points.

Unionville committed 10 second-half turnovers and shot 3-for-16 from the field.

In addition to its defense, Haverford has made a living outhustling opponents for rebounds. It could be the team’s best strength.

“We have kids who can see the basketball. Kids like Addison Brodnik and Chiara MacGillivray, who for a 5-6 guard really rebounds well,” Pellicane said. “As well as our bigs, our two freshmen, Caroline and Mollie.”

“It’s a mindset. Our kids play really, really hard. That’s something you can’t necessarily always coach,” Pellicane said. “It’s a credit to them. They come in every single day to pr

Rustin storms back to stun Hatters in opening round of Districts
Souderton shakes off slow start, tops Bensalem in District 1-6A opener