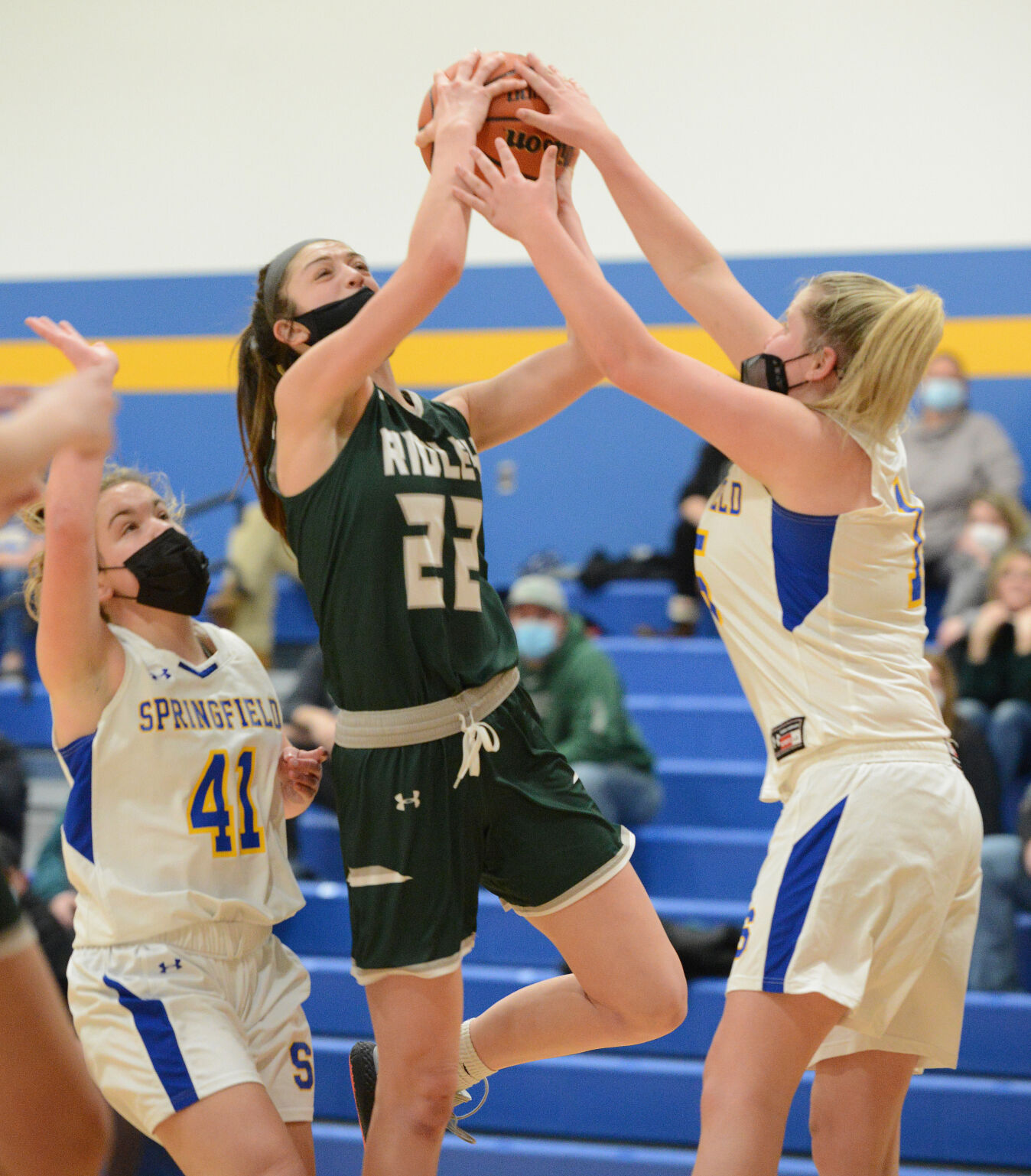 RIDLEY TWP. — No one on the Ridley girls basketball team needs to be told twice. They know if they play more like they did Saturday night against Penncrest, they can make a run in the Central League.

The Green Raiders have been searching for consistency. One night they look solid, but the next night there can be a significant drop-off. Yet Saturday’s 45-28 victory was one of Ridley’s better performances of the 2021-22 season.

“I think we started off on a little bit of a rough patch, but I think we’re definitely learning from all of our games we’ve played so far,” said senior guard Emily Liberio, a Temple lacrosse commit and four-year member of the varsity team. “I think we are finally coming together, and I think tonight’s game really proved that we shouldn’t be considered out for the count yet.”

Ridley (4-5, 4-2 Central), which had lost three of its prior four games, entered Saturday ranked 31st in the District 1 Class 6A power rankings. Coach Roe Falcone hopes the victory is the turning point moment of their season.

“They came out fired up tonight,” Falcone said. “We had a really good practice. … You know, you have to come ready every game and I thought they showed that tonight. In that first quarter, they were fired up.”

The Green Raiders went on a 12-0 run in the opening period to pull away from the Lions. They led 19-5 going into the second period. Senior forward Amirah King (nine points, nine rebounds) dominated the glass in the first half and scored all nine of her points in the opening quarter. Ridley’s ability to get second and third chances on offense helped the Raiders grow their lead to as many as 15 points in the first half.

Junior guard Peyton Berger had a strong floor game, leading all players with 12 points to go with eight rebounds and one assist. Ridley’s success is contingent upon several players contributing on the offensive end and that’s precisely what the Green Raiders accomplished Saturday. Kyra Carney hit a pair of 3-pointers and finished with eight points, while Liberio chipped in with six points and four assists. Abbi Hinchey hopped off the bench to produce five points and seven rebounds.

“We’re not going to win as individuals, we have to win as a team. And we showed that tonight,” Berger said. “It was very big for the team, especially after coming off a loss against Radnor.”

Penncrest (5-4, 1-4) didn’t go down quietly. Freshman Kathryn Harding had back-to-back baskets to pull the Lions within nine points in the third quarter, but the Green Raiders outscored the Lions 18-10 the rest of the way.

First-year coach Penncrest Larry Johnson is pulling double duty. He is in the middle of his 16th season coaching the PSU-Brandywine women’s team where he’s won four PSUAC titles and was named the conference’s coach of the year six times. Coming to Penncrest has allowed Johnson to coach his freshman daughter, Makayla, who chipped in with two points off the bench. Hiring Johnson to take over the program is paying dividends. After years of futility, the Lions (5-4) won five of their first six games this season and look to make a run at a District 1 Class 5A postseason berth.

“Our girls are playing hard and I love the effort they are giving,” Johnson said. “That’s all we’re asking for, is to give the effort. We’re a young team. We’re playing three juniors, a bunch of sophomores and our one freshman who is playing wasn’t here tonight. They’re playing as hard as they possibly can and that’s all you can ask for from a young team. We’ll get there, we’re getting better every game. Hopefully by the end of the year we are where we need to be.”