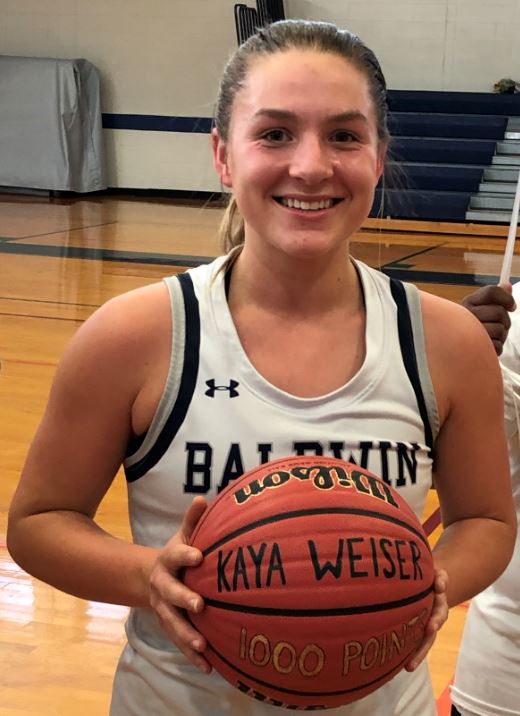 The senior point guard and second-year captain recently scored her 1,000th career point for Baldwin School basketball. She has received All-Main Line basketball honors each of the last three years. A three-sport athlete at Baldwin, she was a key factor in the Polar Bears capturing the Inter-Ac softball tournament title last spring. She is the current Head of the Upper School Athletic Association, and next winter will be playing basketball for Massachusetts Institute of Technology.

Q: Tell us about scoring your 1,000th point – can you describe how the play developed? What was your first reaction on realizing you had reached 1,000? Were you aware before the game of how many points you needed to reach 1,000?

A: The day before our game, I received a message from my coach [Devin Walker] letting me know I was 10 points away from reaching 1,000. The next day, I was nervous but extremely excited all day. It was already our Senior Night game, so the whole school was really excited for the game – even our classmates were making posters for me and my co-captain, Gabi Pritzer, during lunch in our senior lounge. In the first quarter, the opposing team, Springside Chestnut Hill, was playing a zone defense, which as a shooting guard, is my favorite defense to play against. I scored eight points within the first couple minutes of the first quarter from a fast break layup and two threes, and the energy in the gym was unbelievable. I could both feel and hear people in the gym on the edge of their seats. The play that I scored my 1,000 on wasn’t a drawn out play – I was in the corner and ended up dribbling up to the wing after my sister, Allie Weiser, set a screen, and made a three to score the final two points. My first reaction after scoring was to run to my sister. She has been such an important part of my basketball career – her being there for me emotionally and physically throughout this whole process was what made it so exciting. I’m extremely grateful for my teammates’ and coaches’ support throughout this process and couldn’t be more thrilled they were there to experience such a special moment in my life with me.

Q: How did you see your leadership role (on and off the court) as a second-year captain of the Baldwin basketball team this season?

A: As I saw it, one of the most important parts of being a leader this season was re-establishing close-knit connections throughout the team. We had a shortened season last year where we only played seven games because of COVID; there wasn’t much of an opportunity for team bonding last year, so I was hoping to create a stronger community this year. As most of our team is younger girls, being a leader really meant helping out the underclassmen in any way I could. Whether that meant daily Starbucks trips after practice or a Secret Santa party, I knew that our success as a team would parallel our closeness as a team. I couldn’t be more thrilled with the friendships I’ve formed this year. I am extremely excited to pass on the leadership to my sister Allie and Gracie Brunetto, as they take on the captain roles next year, and can’t wait to come back to watch this team play next year.

A: I think the strongest aspect of my game is my three-point shot. The aspect of my game that I consistently worked on over the last two years was improving my range on my three-point and shooting off the dribble. I knew that I wasn’t going to be as open for three-point shots like I have been in the past, as I felt the responsibility to step into the shoes of my former center teammate, Anajah Brown. The part of my game that I am working on most currently, however, is improving my dribbling. Given the fact that I will be a short guard for college basketball next year, I know that tightening my dribble and working on creating more shots for myself will be important to improve my ability to succeed at the college level.

A: My parents have definitely been my most important basketball mentors, though for completely different reasons. My dad is the kind of person to get kicked out of the gym and my mom is the kind of person to cheer for the other team if they make a good shot. My mom coached the first ever basketball team I played for, a Main Line Girls Basketball Association team with all of my best friends, and my mom wore rip-off Wonder Woman pants to each game. This is where my love for basketball sprouted – my mom taught me how to play for fun. When I was in fifth grade, my dad helped me try out for my first club basketball team. My dad had always been my biggest supporter athletically, regardless of the sport I was currently playing. He soon began coaching the team I was playing for, and playing for this team truly taught me the value of hard work and determination. This is where my competitive nature sprouted – my dad taught me how to play to win. I know most people would say that the lesson my mom taught me and the lesson my dad taught me wouldn’t go hand in hand, but I think that the reason I love basketball so much is because I grew up playing basketball with both of these lessons influencing my game.

Q: You wear uniform jersey No. 13 for Baldwin basketball – why did you pick that number?

A: When I was little and playing in recreational leagues, I wore No. 6 because of my birthday, Oct. 6. One year, I drew the short straw and didn’t get No. 6, but got No. 13 instead. I remember being devastated; however, my dad then told me about the great Wilt Chamberlain, the Philly legend, wearing No. 13. From that moment on, I always wore No. 13. It’s very corny, but I knew No. 13 was considered an “unlucky” number and I wanted to make the number “lucky” by being as amazing a basketball player as Wilt Chamberlain. Now, I can’t exactly say that I’m on Wilt Chamberlain’s level, but wearing No. 13 did push me to work extremely hard throughout my basketball career.

Q: Tell us a little about your responsibilities as head of the Upper School Athletic Association. What does this position mean to you?

A: As head of the Upper School Athletic Association, my responsibilities comprise mostly of planning athletic events throughout the school year. Part of leading Athletic Association this year was, as I’ve mentioned before, re-establishing a strong community throughout the school. Last year, each grade in the high school was gathered into separate buildings because of COVID. We are extremely fortunate to have more athletic events this year, so whether it was planning Homecoming or Winter Spirit Nights, I was thrilled to drum up some more school spirit. This position is extremely important to me, especially given the fact that I am a three-sport athlete for Baldwin. Athletic Association can be an outlet for athletes to express both their ideas and frustrations with sports at our school, so I’ve seen my role as head as very crucial to establishing more communication between athletes and administration.

Q: What is your favorite memory of the 2021 softball season?

A: This memory is a very simple memory, but will be a moment I will never forget for the rest of my life. I drive my sister and myself to and from each of our softball games, and I will never forget the car ride home from beating Episcopal Academy during the semi-finals of the Inter-Ac playoffs. The roof of our car was off, the music was blasting, and I can’t remember ever being so happy after a game that wasn’t even my primary sport. That softball team was very special to me – not only was I playing with my sister, but I was playing with some of my best friends. When Blake Landow, our star center fielder, made a diving catch to win that game, I don’t think I’ve ever felt such a rush of happiness in my life. Driving home from that game felt extremely surreal and like an out-of-body experience, my sister and I just couldn’t believe it. Our team had worked so hard all season and it was a testament to our hard work that we won that Inter-Ac Championship.

Q: What do you think are the biggest advantages of being a three-sport athlete?

A: Originally, I played three sports for Baldwin to stay in shape for basketball season; however, I continued to play three sports because of how much fun I was having. My softball and soccer teammates are truly some of my closest friends in this school and I can’t imagine what my athletic career would be like without them. I truly believe playing sports that aren’t your primary sport serve as a reminder that playing sports is supposed to be fun and isn’t supposed to be this immense pressure that weighs on you. Playing soccer and softball re-instilled my love for sports, and more importantly, my love of being on a team.

Q: What is your favorite academic course at Baldwin? What do you think you’d like to major in at MIT? Is there a career field that particularly interests you at the present time?

A: My favorite academic course at Baldwin is Environmental Science – this course has been one of the most engaging ways I’ve learned about science and the world throughout my academic career, and has been very interesting to be a part of throughout this year. At MIT, I am planning on majoring in Chemistry and minoring in possibly Earth Sciences or Finance. I don’t have a particular career field in mind, but part of the reason I chose MIT was because I believe it will provide me with the opportunities to explore possible career paths in exciting and interesting ways.

Favorite pre-game meal: “not really a meal but apple slices”