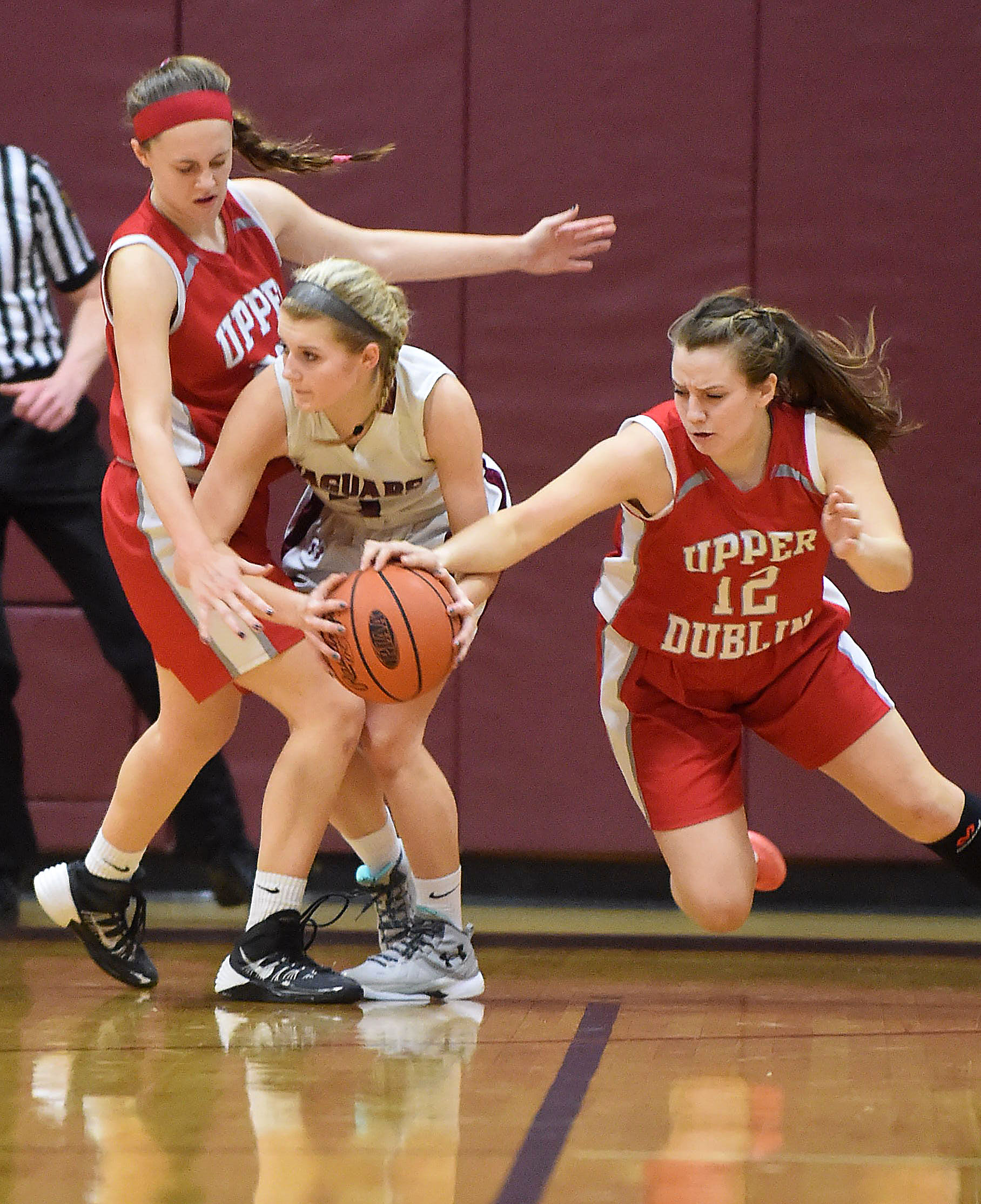 CONCORD >> When Upper Dublin needed someone to hit a shot in the fourth quarter of Saturday’s District One Class AAAA quarterfinal at Garnet Valley, junior Demi Balasa wasn’t going to throw away the opportunity.

The junior forward was busy most of the game grabbing eight rebounds and playing a vital role on a defense that left Garnet Valley frustrated and out of sync for four quarters. Balasa’s coach, Morgan Funsten, has the utmost trust in Balasa to sink a shot from long distance, even though it’s not necessarily her carrying tool on the basketball court.

Balasa wasn’t deterred or nervous. In fact, she was just lending a hand, another contributor on a team that prides itself on its selflessness. There’s no one superstar, but Balasa chose to be the hero Saturday night.

She stood at the top of the perimeter and sank a 3-pointer with less than two minutes ago, giving the sixth-seeded Cardinals a lead they wouldn’t relinquish. Thanks in part to Balasa’s clutch shooting, Upper Dublin claimed a 35-28 victory over No. 3 Garnet Valley.

The Jaguars (23-4) move to the playback round, where they will vie for one of six places in the state tournament. They’ll host Conestoga Wednesday

Meanwhile, Upper Dublin advances to the final four of the district tourney to face No. 2 Perkiomen Valley Wednesday night at Central Bucks South.

“I honestly wasn’t feeling anything, I was just so caught up in the game,” said Balasa, who played AAU ball with the Delco-based Comets. “I didn’t even think, I just shot it. I make sure I practice my 3s and when I get my chance, I do shoot them during the game.”

Balasa added to Upper Dublin’s lead by making three free-throw shots in the waning seconds. She scored six of her eight points in the final period.

“You wouldn’t know by the box scores, but if you saw her shooting percentage you would know that she’s a really good shooter,” Funsten said. “She’s just not a very aggressive offensive player, she likes to let everyone else have success shooting the ball, and she just does all the little things for us. But with (Garnet Valley) playing a triangle-and-2 towards the end, we needed somebody else to step up and make a big shot. Demi stepped up and shot it with confidence. It was a big shot.”

The story of the game was Upper Dublin’s ability to control the tempo and slow the normally fast-paced Jags. Garnet Valley struggled from the field all night, shooting just 19.5 percent (9-for-46).

“Their lowest (scoring) output of the season was 37, so we felt like if we could keep them under 37, that we could win the game,” Funsten said.

Garnet Valley trailed by four points after three quarters. The Jags grabbed the lead when Brianne Borcky connected on an and-1 play to make it 26-23. However, on the ensuing Upper Dublin possession, Josie Barrett drained a 3-pointer to tie the score again. The Cardinals (21-5) made just three shots in the second half, but were 13-for-20 from the foul line. Of their eight total field goals, seven were from beyond the arc.

“I can’t say enough about the plays my girls made in the fourth quarter. They never stopped fighting,” Funsten said. “After (Garnet Valley) took the lead on the and-1, Josie Barrett came through with a 3 to tie it back up at 26. Ashley Barber (seven points, five rebounds) made both ends of a 1-and-1 and Demi hit the biggest shot of the game.”

“Defensively, the girls buy into the game plans and they executed them very well,” Funsten said.

GV found itself trapped by it all, unable to kickstart its run-and-gun offense with any sort of proficiency.

In the loss, senior forward Sam Tomasetti was a relentless ballhawk on defense and produced game highs in rebounds (eight) and blocked shots (three). But that’s little consolation for the Jags, who knew they didn’t play their best game Saturday.

“We had trouble on defense, knowing where to go on defense, because they all can shoot. The tall blonde girl (Balasa) hit the big shot and that hurt us,” Tomasetti said. “I feel like we didn’t play with all of our hearts, so that’s what bothers me the most. Mini (Maddie Ireland, who scored a game-high 11 points) was saying that we weren’t playing our tempo, and we weren’t, but I guess we all have our bad games.”

The good news for the Jags is they have the chance to redeem themselves. Even better, they’re still bound for the state tournament, so not all is lost.

“With every loss, you can use it and learn from it. Whatever we have to work on, we’re going to change for the next game,” Tomasetti said. “We play Conestoga and this will be our third time (against them), so we know what we’re going into and we know we have to be better.”

In a playback game: