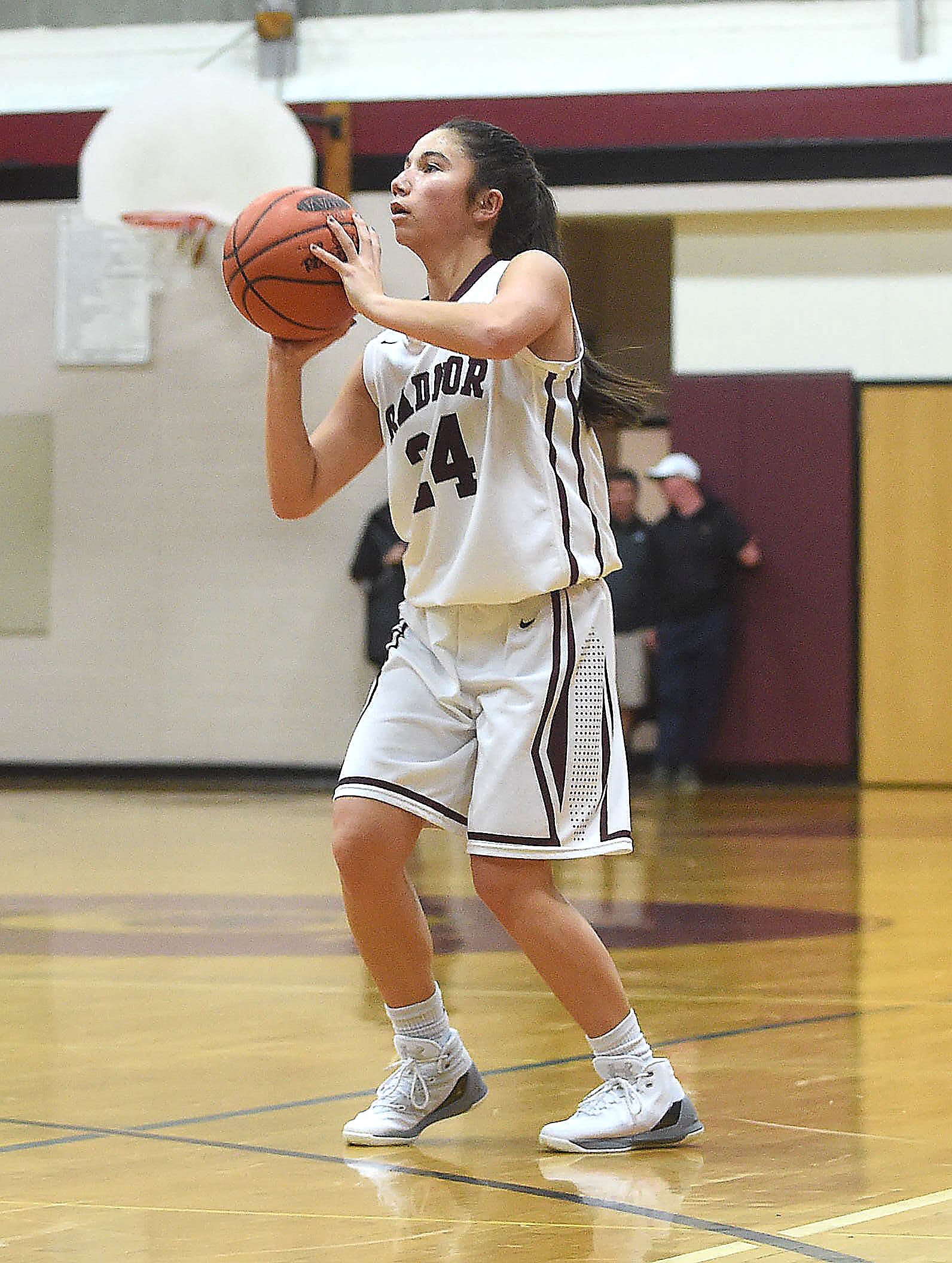 MEDIANEWS GROUP FILE Audrey Rosenblum is one of three seniors on Radnor. Despite their underdog persona, the Raiders claimed fifth place in District 1 and open the PIAA Class 5A tournament against District 11 champion Southern Lehigh Saturday afternoon at Freedom High.

RADNOR — Audrey Rosenblum is missing softball practice, but she finds time to get some hacks in after school.

“Sometimes I hit for about 15 minutes before basketball practice,” the Radnor senior guard said. “But there’s a no-practice rule when you’re in states.”

Rosenblum is the only softball player on the girls basketball team at Radnor (20-6), which is returning to a PIAA tournament for the fourth time in six years.

“It’s sad to think it’s almost over. Our fourth-grade team, the Radnor Rush, has been together all the way through, especially the three of us seniors (Rosenblum, Holly Holtsberg, Cara Camposano). Going into the last game, and now, we feel that we have nothing to lose,” Rosenblum said. “It could be the last time we go out there together, so we don’t want to go out there without a fight.”

Most of “RGB” is comprised of lacrosse players, including junior forward Ellie Mueller, who recently eclipsed the 1,000-point mark for her career.

“Everything since the first round of districts until now has been extra,” Mueller said. “Everyone has their spring sports we should be at right now, but we’re all here in the gym and loving it, while everyone else is practicing outside in the cold. … It’s really exciting.”

Radnor coach Mark Jordan is also busy juggling responsibilities. Jordan is back coaching the Radnor baseball team after his historic run at Marple Newtown. Last spring he guided the Tigers to a PIAA championship, the first by a Delaware County baseball program.

But Jordan is not ready to hang up the clipboard yet. He prepared for this occasion by getting T-shirts made for his players. On the front reads, in bold-blue lettering, “RGB 2019 PIAA 5A.” And on the back it says, “We’re Baaack #notfakenews.”

The shirts speak to Jordan’s quirky humor as well as the mindset of his team before Saturday’s PIAA Class 5A tournament opener with Southern Lehigh (23-3) at Freedom High School.

The Raiders, who took fifth place in District 1, are relaxed and having fun.

RGB had a special guest today preparing for states. He seemed like he approved of our shirts. Great modeling by Eleanor ?? @DTMattSmith pic.twitter.com/OqqNJlm01d

The opponent that stands in front of the Raiders won the District 11 championship and is led by Olivia Snyder, who is 20 points from 2,000 in her career. Southern Lehigh won its fourth straight Colonial League title this season.

“We know they’re good, we get it, but we’re going to play our game,” Jordan said. “We’re happy to be here and we know we have a shot. Of the last four years we have been in states, this is our best team. We have some length, we have a couple of shooters, we have ball-handlers. We’re ready to this.”

Radnor’s strategy under Jordan is to play a fast-paced style, especially in transition. Don’t expect that to change Saturday.

“Oh, we’re running,” Mueller said. “We’ll see how long they can stay with us. Hopefully we can get them gassed by the third quarter.”

In addition to Radnor, other Class 5A matchups involving Delco teams include:

Arch. Carroll vs. Spring Grove at Jefferson University, 5 >> The Patriots (21-5) won the Catholic League and District 12 championships. Winners of 15 in a row, Carroll is in position to get to Hershey and win the program’s third state title.

Springfield vs. Arch. Wood at Spring-Ford H.S., 5 >> The Cougars’ hopes of a second District 1 crown in three seasons were dashed in the semifinal round. Four-year starters Jordan D’Ambrosio and Belle Mastropietro helped Springfield to a third-place finish. The Cougars will lean on their seniors to take them far in states.

The Vikings (15-11) fell to Carroll in the Catholic League final, but bounced back with a 60-26 rout of Palumbo to claim third place in District 12. Wood isn’t the juggernaut it was earlier in the decade, but coach Mike McDonald’s team is brimming with exciting talent, including sophomore sensation Kathryn Orihel and Lindsay Tretter, both of whom can score from anywhere on the floor.

The Vikings defeated the Cougars in the first round of last year’s PIAA tournament.

Also Saturday, In Class 4A:

Bonner & Prendergast vs. Bermudian Springs at O’Hara, 3 >> The Pandas (16-9) captured the District 12 final. Seniors Maeve McCann and Ariana McGeary have been steady offensive performers all year. Dakota McCaughan, a junior guard, ranks among the top five in Delco in 3-pointers.

Bermudian Springs earned fifth place in District 5 and is appearing in the PIAA tournament for the first time in 22 years. Junior Skylar West is one to watch on the Eagles.

Christian Academy vs. Weatherly at Pottstown, 6:30 >> The Crusaders (19-5) advanced to their District 1 final, falling to reigning state champion Jenkintown by a wide margin. TCA is led by guard Grace Gormley, a four-year starter and 1,000-point scorer.

Chester Charter SA vs. Greenwood at East Pennsboro, 3 >> The Sabers (18-4) continue to play without senior guard Logan Handy (24 ppg), who is ineligible due to the PIAA’s rule that prohibits transfers from participating in district and state tournaments. CCSA went winless in the district tournament.

Ashanti Duncan is a top player on Greenwood, which won the District 3 crown.

Garnet Valley vs. Cedar Crest at Spring-Ford H.S., 6:30 >> The Jags (27-1) are flying high after capturing their first District 1 championship. All-Delco forward Emily McAteer, the leading scorer in school history, scored 27 points in the win over Neshaminy and has played outstanding throughout the postseason.

The Falcons (19-8), who captured the Lancaster-Lebanon Section Three title, took the seventh and final bid in District 3.  Raven Morgan, who is averaging close to 12 points per game, earned league MVP honors.

PW also is going through a youth-driven campaign, led by freshmen Lainey Allen and Kate Flanagan. The Colonials (21-6) claimed 10th place in District 1.