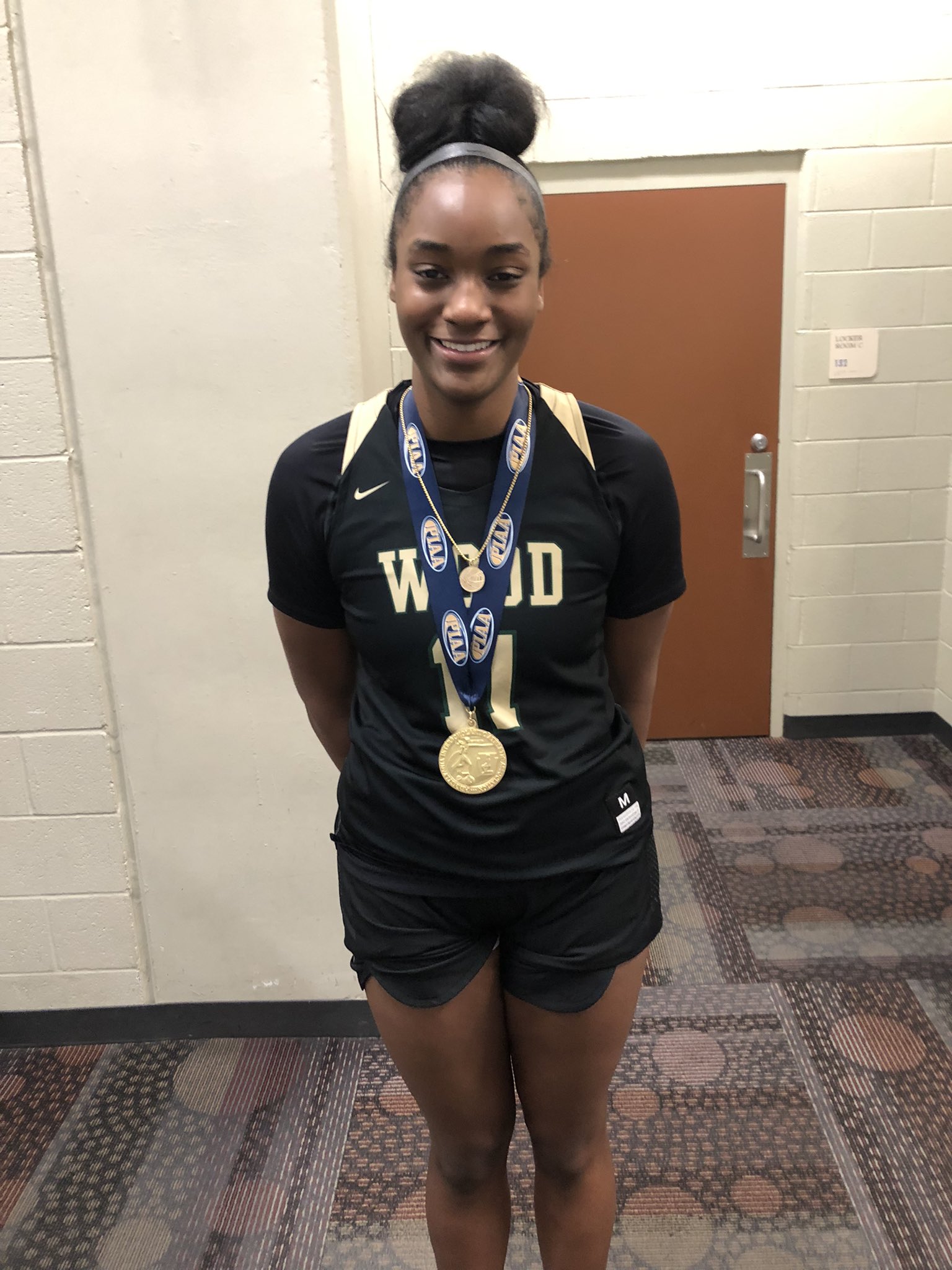 Archbishop Wood forward Deja Evans poses with her state championship medal after setting a PIAA title game record with 20 rebounds in the Vikings' 57-45 win over Lansdale Catholic. Evans committed to Albany on June 16.

It was a phone call that only solidified what Deja Evans already knew.

Evans, a rising senior at Archbishop Wood, had been talking to Albany women’s basketball coach Colleen Mullen and it was something the Great Danes’ leader had said that really resonated. Albany had been Evans’ first Division I offer but with a July full of open recruiting periods looming, it seemed a safe bet that more would come her way.

It wasn’t enough to overcome what Evans had realized pretty much from the start and she made Albany her future home by committing to the program on June 16.

“I had a really strong feeling. I talked with her a day before I decided to commit and we just had a really good conversation,” Evans said. “She told me she understands if I made the decision to go to another school and it meant a lot to me. I had a conversation with my family and my brother (Chris), he’s a mentor to me, and I came to the realization that’s where I wanted to be.”

Evans knew early on she wanted to play basketball in college, even if it was a given coming from a hoops-loving family. Her dad played in high school and with her older brother Chris, a standout at Norristown Area High School and then Chestnut Hill College, she had the perfect role model, mentor and trainer.

Chris, who graduated from Chestnut Hill in 2018 and currently serves as an assistant coach with the men’s basketball program, took his sister for a workout after her phone call with Mullen. There, he told Deja she would know what felt right and reminded her that Albany had been there from the beginning.

“When I went to watch their practices and visited with a couple of the players on campus, it was the relationships that they’d had throughout their recruiting process and time in college that stood out as strong,” Evans said. “I think I was definitely trying to see if other schools could compete with Albany because of the way they had shown me they loved me from the jump.”

A 6-foot-2 forward, Evans earned third team honors on the PA Sportswriters Class 4A all-state teams in her first season with Wood. Evans, who was also second team All-PCL, finished the season in dominant fashion with five straight double-doubles in the state tournament capped with a PIAA title game record 20 rebounds and 15 points in the Vikings’ 57-45 win over rival Lansdale Catholic.

Evans had a little familiarity with Wood teammate Delaney Finnegan as they play on the same Philly Belles AAU squad but it was otherwise a total transition after playing her first two years at Plymouth Whitemarsh. The forward credited the team’s leaders like Ryanne Allen, Bri Bowen and Shannon Morgan for welcoming her in.

“Wood plays at a higher level than a lot of other high school teams but it was the other players who were able to give me a lot of confidence,” Evans said. “They put a lot of faith in me.”

Vikings coach Mike McDonald felt that once Evans got used to her new team, her play elevated as the competition did. He saw early that the forward possessed a versatile skill set and feels Albany and Evans will be a great fit for each other.

“She was really excited,” McDonald said. “She had a couple offers but a lot of times that first one is the one that makes you think they really, really wanted you. She was going to put it off for a couple days then next thing you know, she’s on the phone saying she’d just committed to Albany, so that’s a good sign. She really felt great about the coaching staff and the school.”

McDonald added that Evans was selected to be a captain for Wood next season. The Vikings coaches have the returning players give their thoughts before selecting captains and every returning player had Evans as someone they wanted to see in the role.

“It shows her character,” McDonald said. “She came in for one year and in some cases, is playing in front of kids who would be playing if she wasn’t there and they all wanted her to be a captain. It just shows the kind of teammate she is and the respect she has.”

Evans said she’s a very competitive person by nature and hopes to show off a little more of her game, which includes an outside shot and some off-the-dribble offense, this year. She knows her top job will still be rebounding.

“I don’t really think about it, I just go after the ball,” Evans said. “Every one I can get can lead to a good possession for my team.”

She’s focused on the rest of this summer playing with her Belles teammates and coach Michael Steidle, then getting back in the gym with Wood. The Vikings missed out on repeating as PCL champions last year and with their largest senior class in several seasons back for one last run, it’s a top priority for Evans this season.

Evans said her recruitment brought her closer to her family and they’ve all taken some time to enjoy the fact she’s now able to call herself a future college basketball player.

“I’m just really excited and thankful I was able to commit to a Division I program and have a chance to play after high school,” Evans said.