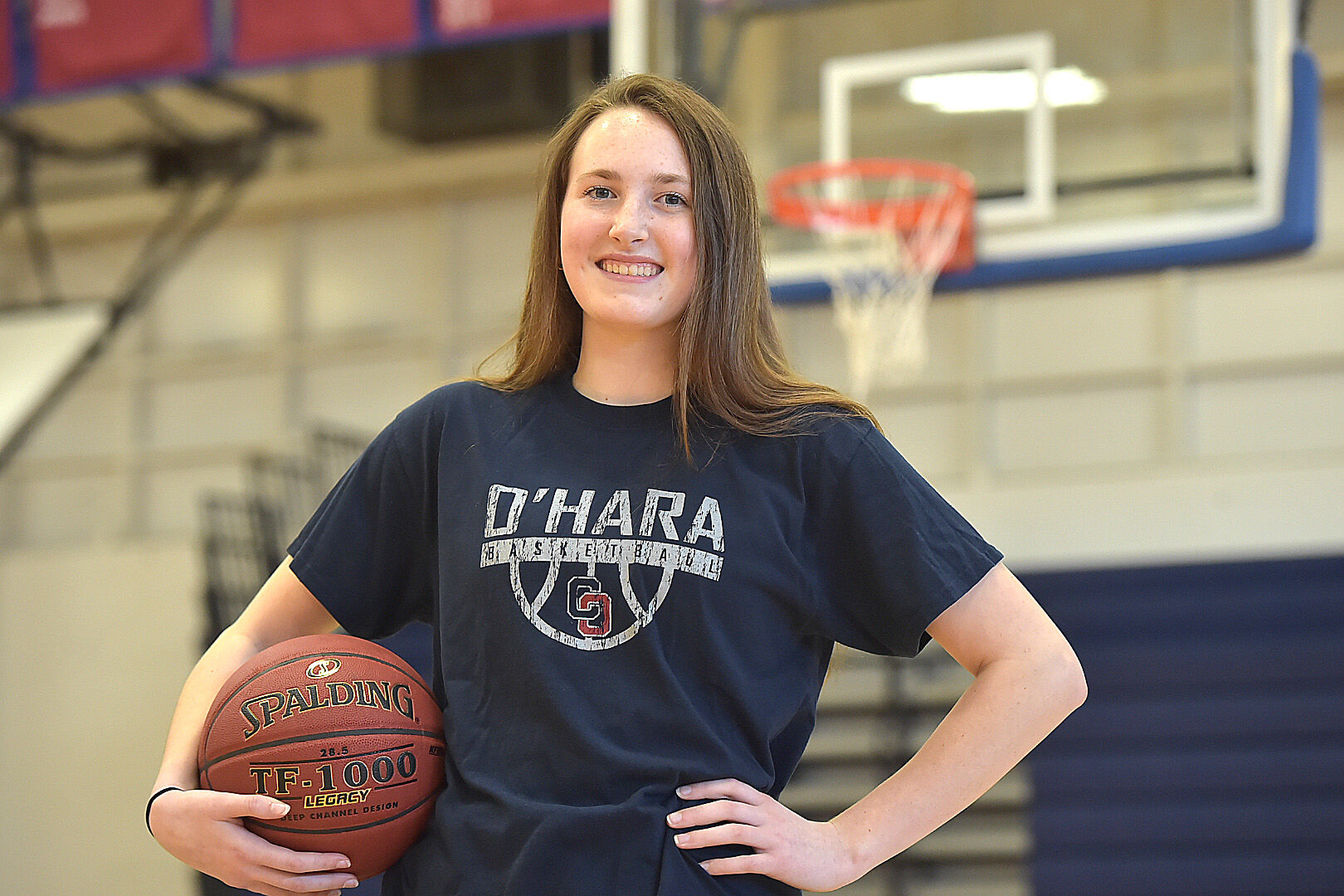 MARPLE — Maggie Doogan hasn’t shied away from her bloodlines. She realizes how fortunate she is to be the daughter of a Big Five Hall of Fame player, yet she’s never felt pressure to follow in the footsteps of her mom.

Chrissie (Donahue) Doogan was a two-time Daily Times Player of the Year in her heyday at Cardinal O’Hara, who went on to become one of the greatest players in La Salle history, scoring 1,818 career points.

Doogan focused on her development as a dynamic 6-foot-plus forward who can post up, defend, and shoot from just about anywhere on the floor. In 2021, her junior season, she became the best player in Delaware County and the latest in a long list of Daily Times Players of the Year from O’Hara.

Doogan was a freshman when her mom became the head coach at O’Hara. That 2018-19 season was about rebuilding, if there is such a thing at O’Hara, and Doogan played a key role off the bench for a young team that made a surprising run to the quarterfinal round of the PIAA Class 6A tournament.

Maggie Doogan the freshman thought plenty about being part of the next great Lions team. Legendary coach Linus McGinity had retired in 2018. Maura Hendrixson and Hannah Nihill, both Daily Times Players of the Year, were off to Drexel University. All-Delcos Mary Sheehan (St. Joseph’s) and Kenzie Gardler (Villanova) were gone, too.

For Doogan, freshman year was a strange time. A program accustomed to competing for Catholic League and PIAA titles was starting from scratch, and she would be a key building block to the future.

“I mean, with Kenzie and Maura and Molly (Paolino) leaving, those are some pretty big shoes to fill,” Doogan said. “In my freshman year, we struggled a little bit. It took a lot of time for us to start to come together, you know, trying to figure out how to piece it all together. … It was definitely a rebuilding year, but I just had to do as much as I could to help.”

By the time she was a sophomore, Doogan was in the starting lineup, beginning her ascension to stardom in the Philadelphia Catholic League. Watching her develop on the floor, you could see Doogan was going to be a Division I player someday, just like her mom.

“In my sophomore year, we had lost a couple seniors, but I think we played pretty well,” she said. “I think we would have made it a little further in the state tournament if COVID didn’t hit.”

Indeed, the Lions had just won their second-round game against Spring-Ford before the pandemic suspended and eventually canceled the tournament.

“We wanted this year to show we could win a championship,” she said.

Scott and McErlane are two-time All-Delco selections. Doogan was on the All-Delco second team her sophomore year.

“I think we were all a little nervous this year,” she said. “We came in not knowing what to expect. We had to be extra careful. It was in the back of our minds, knowing that we could stop having a season at any moment. We tried not to think about it too much and just take advantage of every game that we had.”

With Doogan at the center of it all, the Lions bounced back from a devastating loss to Archbishop Wood in the Catholic League final to win the school’s first PIAA championship. The Lions had been 0-2 in state finals, but this year’s team left no doubt it was the best in the 5A division. In fact, for the first time in history, three Catholic League teams (O’Hara, Wood and West Catholic) left Hershey’s Giant Center with a PIAA trophy. The Lions finished with a 15-4 record.

O’Hara went on a run of nine straight victories after an uneven start. It lost games in January against Archbishop Carroll, Wood and West Catholic. The Lions struggled early on to finish close games. The turning point to their season was the third loss at West Catholic.

“We wanted to take advantage of our season and we didn’t want to let it slip out of our hands,” Doogan said.

After losing to Wood for a second time in the PCL final, Doogan said her mom delivered a clear message to the team.

“We couldn’t hang her heads,” Maggie said. “She said to take 24 hours to be upset about it. That’s what I did and that’s what she did. But she said that we have to come back, we have a whole new season coming, it’s a completely different tournament. We just had to try and forget about it as much as we could, just forget about that loss, as hard as it was.”

After surviving a tightly contested game at Springfield in the semifinals, the Lions arrived at Hershey and dismantled Chartiers Valley, the reigning Class 5A champion. O’Hara jumped out to a 10-0 lead and never looked back. Doogan scored 13 points, grabbed seven rebounds and had five blocked shots.

“We came to play, we wanted to win so bad,” she said. “We just knew that they weren’t going to beat us. We played as a team and were so happy to bring a (PIAA) championship to O’Hara and be the first team to do it.”

With Doogan back in the fold next season, the Lions should be among the top teams in the state. Doogan admits there’s one very big box left to check before she graduates next spring.

“The Catholic League championship is definitely something we want,” she said. “That’s going to motivate us for next season.”