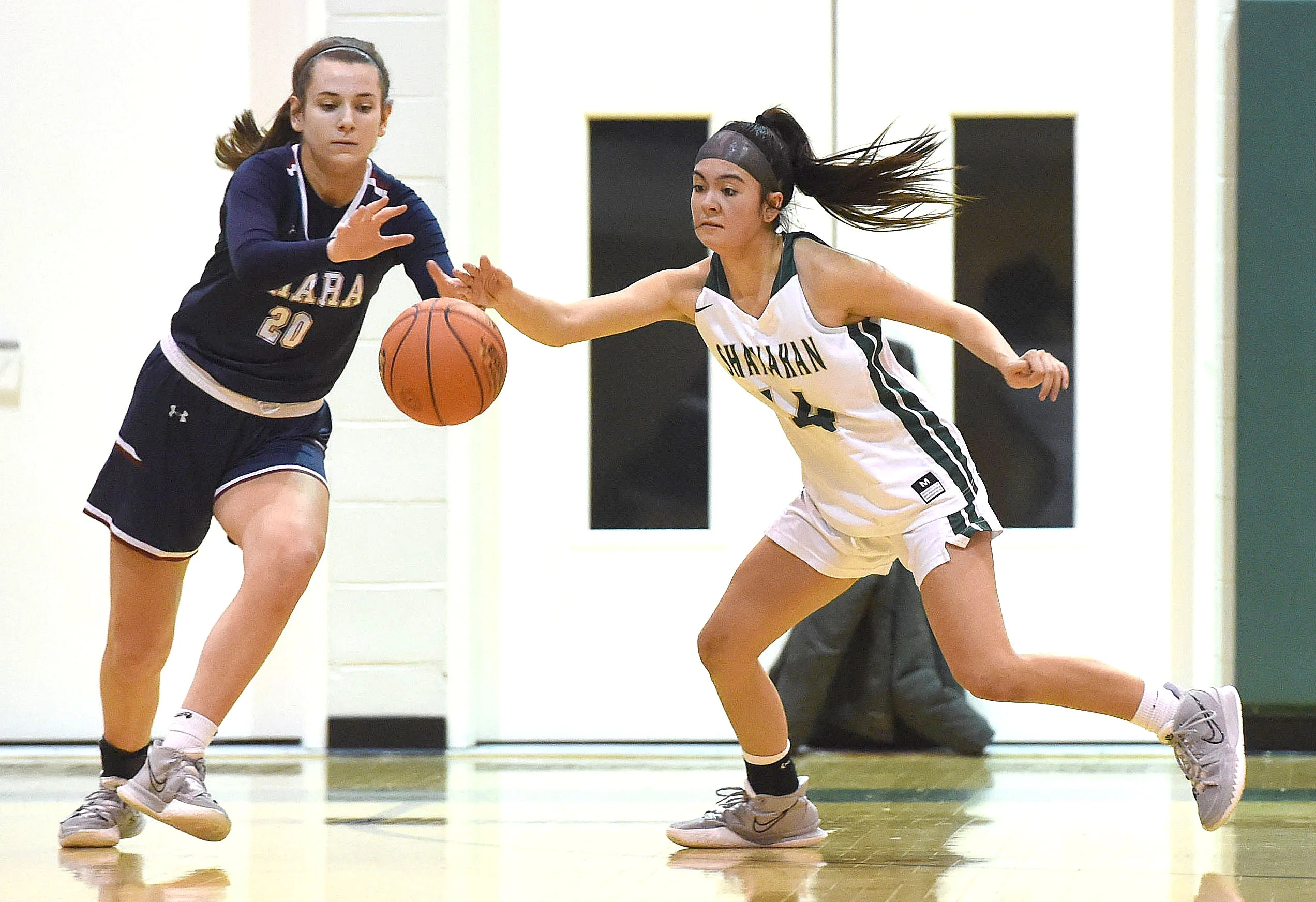 Cardinal O'Hara's Annie Welde, left, and Bishop Shanahan's Alexa Bojko vie for a loose ball in the second quarter of O'Hara's 52-32 win in the first round of the PIAA Class 6A tournament Wednesday night. (PETE BANNAN - DAILY TIMES)

DOWNINGTOWN >> It may have said the Cardinal O’Hara was the third-place team out of District 12, but everybody at Bishop Shanahan knew better and the Lions played like one of the top teams in state that they are.

Putting aside the controversy that engulfed them in the past week, O’Hara led from start to finish and pulled away in the third quarter en route to a 52-32 win over Bishop Shanahan in the first round of the PIAA 5A Tournament on Wednesday.

The Lions, whose official record according to the PIAA improved to 12-15, will face Greencastle Antrim of District 3 in the second round Saturday.

O’Hara had to forfeit a number of games after being ruled to have an inelligible player as a result of a clerical error. They were originally the top seed, but were place third. That meant that although they had a home game, Shanahan had to face the defending state champions in the opening round.

“It was fun, it was good,” said O’Hara coach Chrissie Doogan said when asked about getting on the court. “I think our team had a little state championship jitters to begin the game, throwing the ball all over the place. But, once we settled in, we started playing well.”

Both teams were off to tenative starts. O’Hara opened up a 13-8 lead late in the quarter, until a left corner three from Abby Wolf seconds before the end of the quarter allowed the Eagles to cut the deficit to 13-11.

The turnovers started to stockpile for the Eagles as the deficit started to grow. The Lions jumped out to 5-0 run to take an 18-11 lead. Alyssa Brown’s basket stopped the run with 3:40 left.

“To even be down six at halftime with the turover problem was good,” said Shanahan coach Jim Powers. “I think if we didn’t turn it over, get a quick basket, we could’ve been down less at half. But, then in the third quarter, they just shot the lights out. That’s what they are, they’re a good team.”

Faith Ambrose scored just before to half to have Shanahan trail, 21-15 at the break.

In the 1960’s the New York Yankees used the “M&M Boys,” Roger Maris and Mickey Mantle, to wreak havoc. O’Hara’s version was Molly Rullo and Maggie Doogan. The two combined for 14 points in the third and 37 on the evening.

O’Hara outscored Shanahan 17-7 in the stanza to take control. They scored 15 of the last 18 points as they took control of their height advantage inside. Rullo, a freshman guard had eight points and Doogan added 8. They glided into the fourth with a 38-22 advantage.

“It’s a great feeling, one down four to go,” said Doogan. “We played them in the regular season, I realized how much of a height advantage I had, so while watching tape, I was thinking what moves I could use to get open.”

The two teams met in January with O’Hara using much the same formula to work out a 55-28 win.

“That’s kind of what happened the last time,” said Powers. “It wasn’t like it was anything crazy, it was a bucket here, a stop there, and you look up and say, ‘what the (heck) happened.”

The Lions held Shanahan at bay in the fourth, and when the lead grew to 46-25, both coaches started to clear their benches.

Shanahan’s season ended at 16-10, but the young team, which returns almost its entire roster, believe they will have a bright future next season.

“It’s a good season for the kids,” said Powers. “We return all but one kid and they just have to use this as a learning lesson. A chance to grow.”