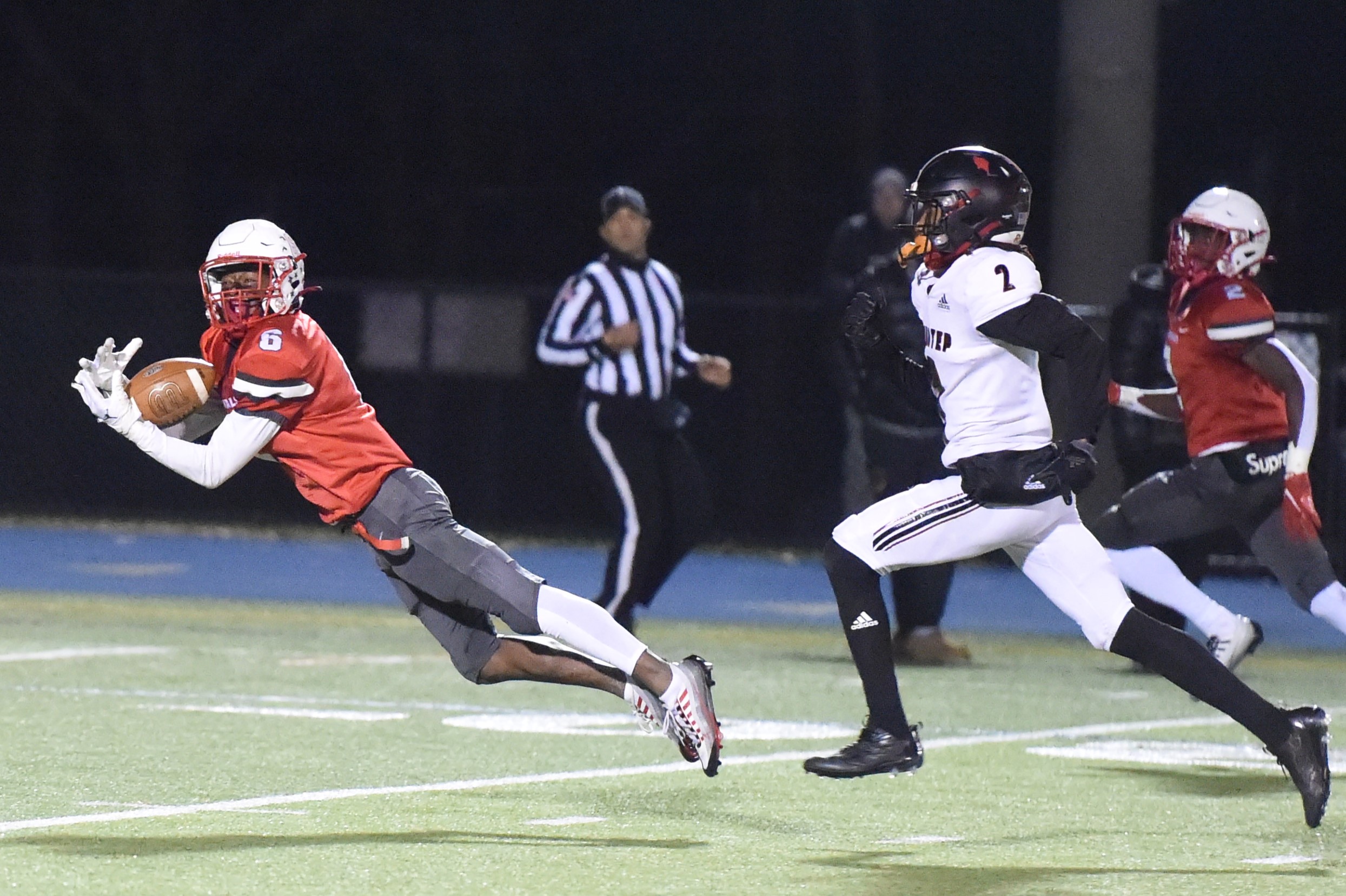 LOWER GWYNEDD >> Upper Dublin had no points on the board and trailed Imhotep Charter by three touchdowns late in the third quarter of their PIAA-5A state semifinal Friday night. It was an easy spot to roll over, accept the outcome and reflect on the success of the last four months.

Not for Upper Dublin. The Cardinals scored a touchdown late in the third quarter and another midway through the fourth. They forced a 3-and-out to get the ball back with 3:26 left on the clock and a chance to punch their ticket to the state championship game.

Upper Dublin drove down to Imhotep’s 25-yard line with plenty of time and timeouts, but an offensive holding penalty on third down and a fumbled snap on fourth resulted in a turnover on downs. After the Panthers picked up a first down, the Cardinals season ended with a 21-14 loss at Wissahickon High School.

“The way we competed,” Upper Dublin coach Bret Stover highlighted. “Twenty-one nothing, you can go away and hide and nobody would fault you for it. But these guys, their M.O., the moxy these guys have, they wouldn’t quit. We battled until the end, we really did, until they got that last first down.”

Imhotep Charter’s Corey Wright-Downing (21) eyes the end zone before reaching it on ahead of Upper Dublin’s DJ Cerisier (2) for a 37-yard touchdown pass in the second quarter of the PIAA-6A semifinal on Friday, Dec. 2, 2022 at Wissahickon. (Mike Cabrey/MediaNews Group)

“We knew we had to believe, we had to fight and we knew we could put it in,” Upper Dublin senior Griffin Pensabene said. “Unfortunately we didn’t get it done, but it’s all about believing in each other. We have a great group of guys out there and we fought til the end. We fought like heck. We’re one of the more undersized teams, playing against a powerhouse like ‘Tep, a lot of kids would have died when they were down 21-0. I’m really proud of these guys, proud of what we accomplished even though we didn’t get it done.”

Upper Dublin (14-1) started its comeback when quarterback Colin O’Sullivan found wide receiver Staring Reaves, who made a diving catch, for 34 yards at the Imhotep (10-2) 16-yard line. Four plays later, O’Sullivan hit Pensabene for a four-yard touchdown to make it 21-7 with 3:02 left in the third.

After two Imhotep punts sandwiched around an Upper Dublin punt, the Cardinals took over at their own 36-yard line. The Suburban One League Continental Conference and District 1-5A champions put together a 12-play drive with two fourth down conversion. O’Sullivan finished the drive with a 14-yard touchdown pass to wide receiver DJ Cerisier. The score made it 21-14 with 4:59 to go.

Their defense forced a crucial 3-and-out on the ensuing possession. Linebackers Jacob Cornbluth and Ryan O’Sullivan stopped Imhotep running back and Georgia commit Jabree Wallace-Coleman for two yards on first down. Pensabene and defensive end Nyles Bunn-McNeill teamed up to drop Wallace-Coleman for a five-yard loss on a second down option play. On 3rd-and-long, Bunn-McNeill pressure Imhotep quarterback Mikal Davis into throwing the ball away. The Panthers punt set up Upper Dublin at their 27-yard line with 3:26 remaining.

Upper Dublin defense forces 3 and out. Here we go pic.twitter.com/Gdi2x7Gksi

“When we got the ball back,” Stover said, “I thought, ‘Hey here we go.’ We had a two-point play already picked out. We were going for the win – we were…. I’m so happy to be a part of the ride they took me on and all the coaches, that’s the way we all feel.”

On the first play of the drive, Colin O’Sullivan hit Chris Kohlbrenner for 12 yards, Pensabene for nine and, after a delay of game penalty that plagued both teams throughout the game, Kohlbrenner again for 32 yards and a 1st down at Imhotep’s 25.

Incompletions on first and second down were followed by an offensive holding call. O’Sullivan hit Reaves for 12 yards to turn a 3rd-and-25 into 4th-and-13. The Cardinals had problems with the snap and lost eight yards to turn the ball over.

Wallace-Coleman ran for four and eight-yards on the ensuing plays to pick up a first down and send Imhotep to the state championship game next week.

Imhotep jumped out to a fast start, forcing an Upper Dublin 3-and-out before Davis took a quarterback draw up the middle for a 61-yard touchdown and 7-0 lead less than two minutes into the game.

The Cardinals defense settled in after that, forcing three straight punts, but the offense couldn’t take advantage. Imhotep grabbed a pair of interceptions, including one in inside their 10-yard line, and made a defensive stop on fourth down at their own 20.

Imhotep Charter quarterback Mikal Davis Jr. (12) breaks away for a 61-yard touchdown run in the first quarter against Upper Dublin in their PIAA-5A semifinal on Friday, Dec. 2, 2022 at Wissahickon. (Mike Cabrey/MediaNews Group)

“We had opportunities in the first half and I didn’t call the right play,” Stover said. “That’s what I attribute it to.”

Imhotep ended the half with a 10-play, 87-yard touchdown drive to go up 14-0. Davis connected with receiver Johann Hennigan for first downs on 3rd-and-11 and 3rd-and-12 before hitting Corey Wright-Downing for a 37-yard touchdown with 1:17 left before the break.

The Panthers started the second half with the ball and made it 21-0. The 10-play, 64-yard drive ended with a pair of Davis sneaks. With some help from his teammates, Davis scored from one yard out to make it a three-touchdown game with 8:40 left in the third quarter.

The Cardinals defense forced three three-and-outs and another punt at the end of an eight-play drive on the next four Imhotep possessions.

“We came out soft, a little slow,” Pensabene said. “After we started hitting each other we knew they’re bigger than us, but we’re a tough group of guys. If we would have came out like that from the start I think we would have won this game. It’s really unfortunate, but I’m really proud of these guys.”

In all, UD held Imhotep to 127 rushing yards on 36 carries, a 3.5 yards per carry average. After Davis’ 61-yard score in the opening two minutes, the Cardinals limited the Panthers to 1.8 yards per carry on 34 attempts.

Upper Dublin didn’t find much success on the ground, either, running for 35 yards on 21 attempts, just 1.6 per carry. Through the air, O’Sullivan went 24-for-47 for 234 yards, two touchdowns and two interceptions. Cerisier was his top target, catching 10 passes for 88 yards and a score.