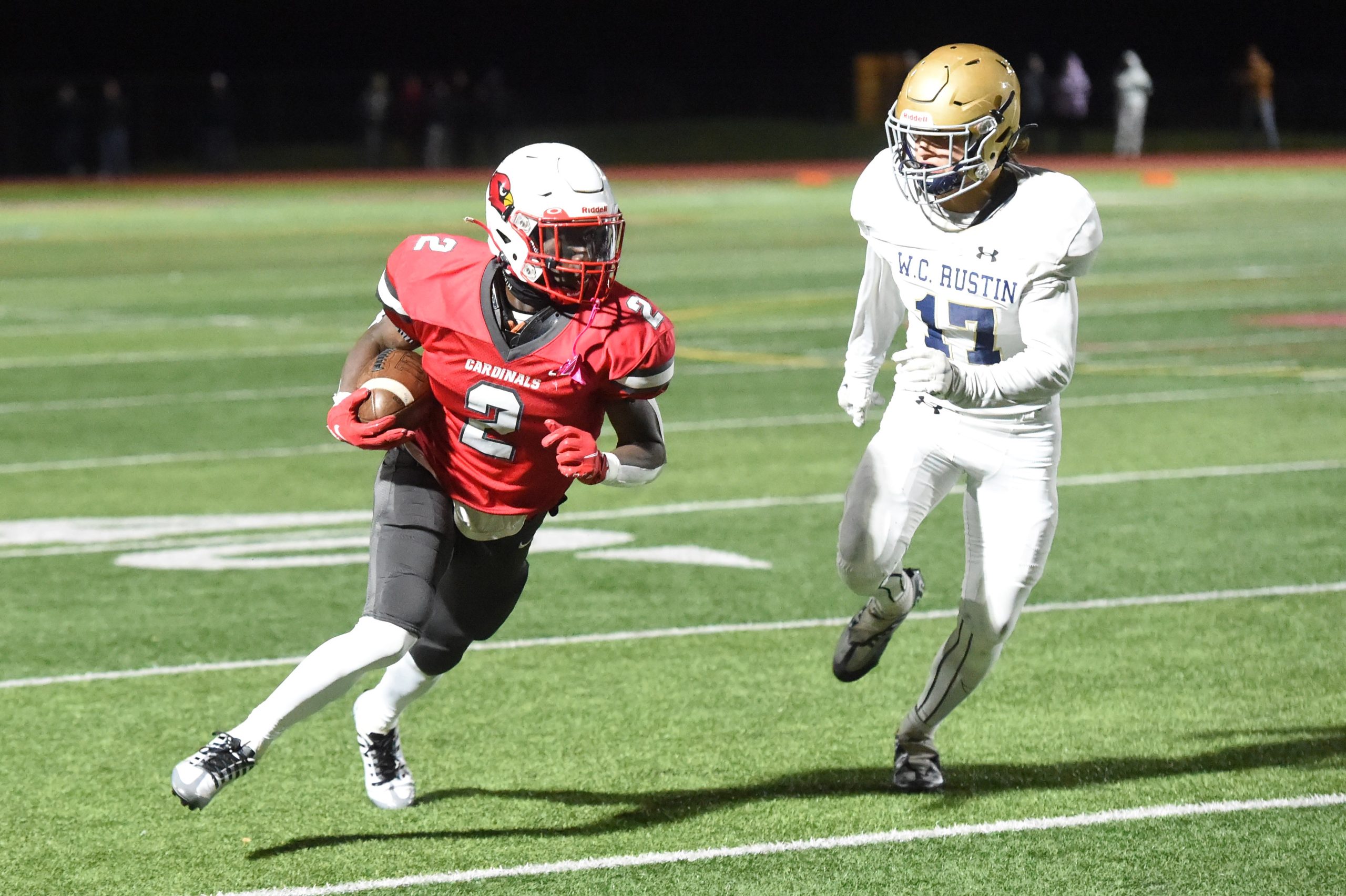 Upper Dublin's DJ Cerisier (2) looks to get past West Chester Rustin's Marek Seaman (17) after his reception during the District 1-5A final on Friday, Nov. 25, 2022. (Mike Cabrey/MediaNews Group)

Upper Dublin was excited about its offense coming into this season and for good reason. The Cardinals returned senior quarterback Colin O’Sullivan, who’s been starting since he was a sophomore, and senior running back Nyfise McIntyre, a 2021 Second Team All-Suburban One League Continental Conference selection.

Another reason was the wide receiver room. They struggled at times in their season-ending District 1-5A quarterfinal loss last year when starting receivers dealt with cramps, so they focused on building depth during the offseason.

“We’re going to be receiver by committee,” coach Bret Stover said during the heat acclimization period in August. “What our plan was, instead of having three or four guys, we’re trying to have eight to 10 guys that we can just interchange. We have so many two-way players here, if you need a break the next guy is in and we aren’t losing anything. That’s what we’ve been really working hard on this entire offseason – getting eight to 10 of those guys for Colin to throw to and have confidence to throw to and I think we’re close.”

“That’s definitely something we’ve built up,” O’Sullivan said in August. “We added more depth this year, guys that can rotate in at any time. If someone goes down, it’s next man up this year and we have the depth to do that. It’s big for us.”

Fourteen games and a District 1-5A championship later, it looks like Upper Dublin built the receiver room it wanted. Upper Dublin’s Staring Reaves (6) races to the end zone for a 33-yard touchdown reception against West Chester Rustin during the District 1-5A final on Friday, Nov. 25, 2022. (Mike Cabrey/MediaNews Group)

It’s a diverse group of pass-catchers who showed their unique abilities in the 21-7 District 1-5A championship win over West Chester Rustin last Friday night.

Reaves was the leading receiver with 53 yards and a touchdown. The speedster showed off his wheels when he caught a 33-yard touchdown on 3rd-and-14 to get the scoring started in the first quarter.

Pensabene set up that touchdown with two key catches on the opening drive. He made tough grabs on 4th-and-5 and 3rd-and-8 – for seven and nine yards, respectively – to keep the Cardinals moving down the field. Upper Dublin’s Griffin Pensabene (8) looks to get upfield after his reception against West Chester Rustin during the District 1-5A final on Friday, Nov. 25, 2022. (Mike Cabrey/MediaNews Group)

Cerisier and Kohlbrenner each made four grabs in the district title game – Cerisier for 46 yards and Kohlbrenner for 40. Kohlbrenner got off to a fast start with 13 and 10-yard grabs on the Cardinals first two offensive plays. Cerisier had an 11-yard catch on 2nd-and-9 from the Rustin 12-yard line to set up a one-yard McIntyre touchdown run on the first drive of the third quarter.

Cornbluth had two catches for 28 yards on back-to-back plays early in the fourth quarter. His two grabs were key in a 14-play, clock-killing drive with a three-score lead.

“We feel comfortable with any of them in the game at any time and so does Colin, which is nice,” Stover said. “When you have that ability to throw to anybody on any given play, teams can’t zero in on one single person. Colin is going to throw to the open kid. It doesn’t matter who it is, he’s going to get the ball to the open guy. It’s nice. When you have that out there at quarterback, it’s extremely helpful.”

“It’s unbelievable that I have those guys,” O’Sullivan said. “Any night those guys can have 200. You have to guard all of them. Just being able to pick and choose when you play man-to-man is tough. It’s awesome, building connections with those guys all over the season is starting to show now.”

The Cardinals offense will be tested Friday night in the PIAA-5A state semifinals. They face a talented Imhotep Charter defense at 7 p.m. at Wissahickon High School.