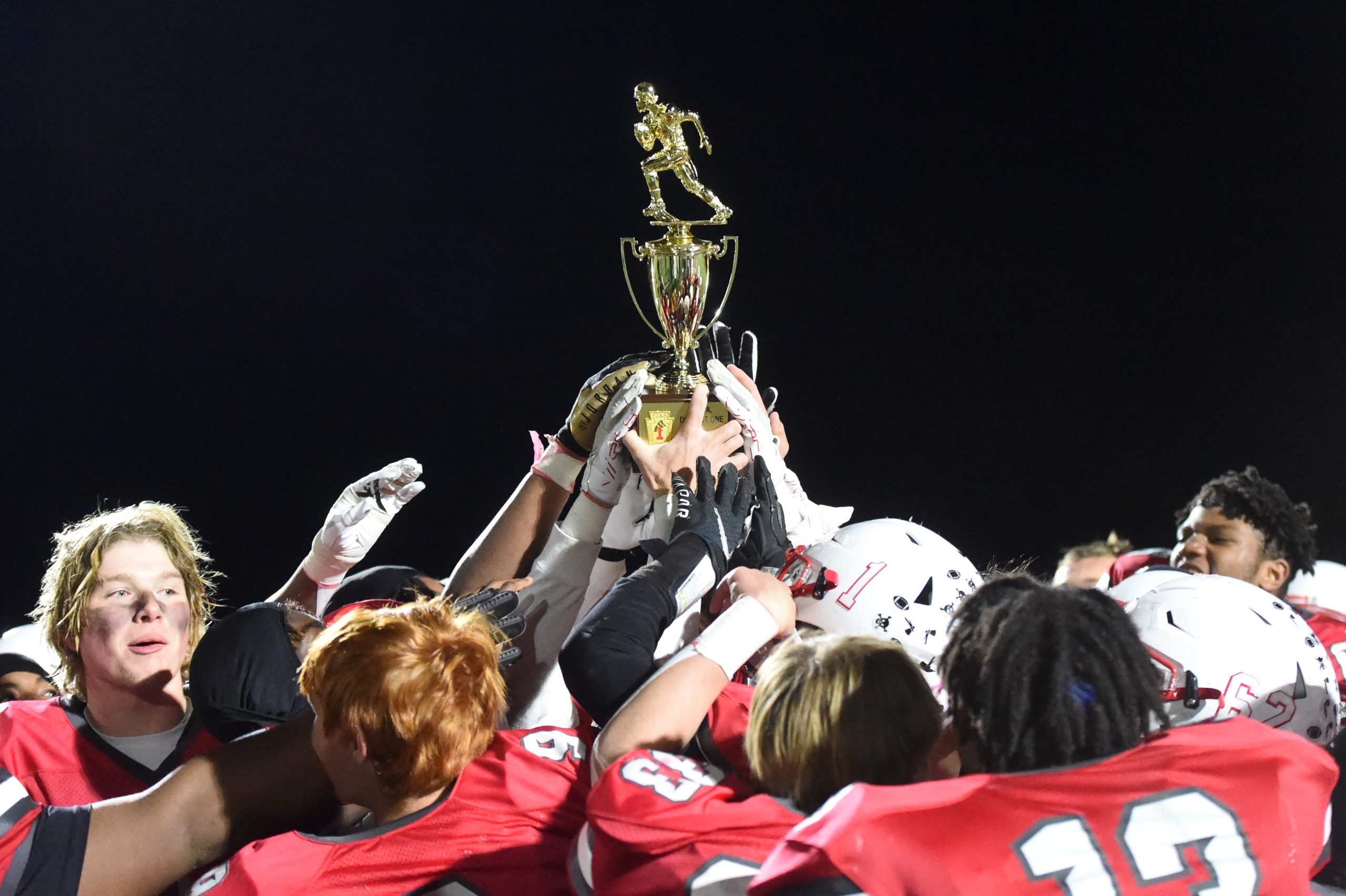 Upper Dublin celebrates with the District 1 championship trophy after its 21-7 win over West Chester Rustin in the District 1-5A final on Friday, Nov. 25, 2022. (Mike Cabrey/MediaNews Group)

UPPER DUBLIN >> Upper Dublin has been dominant on the offensive and defensive sides of the ball all season. In the first three rounds of the district playoffs, the Cardinals scored 100 points and held their opponents to zero.

In the District 1-5A championship game Friday night, it was special teams that gave top-seeded Upper Dublin the boost it needed.

With a one-touchdown lead in the second quarter, senior Kyree Butler blocked a punt to set up the Cardinals with great field position at No. 3 West Chester Rustin’s 35-yard line. Seven plays and a pair of Rustin penalties later, Jacob Cornbluth was in the end zone and the lead was doubled.

The Cardinals led by multiple possessions the rest of the way and beat the Golden Knights, 21-7, at Upper Dublin High School’s Cardinal Stadium. It’s Upper Dublin’s fourth District 1 championship since 2015 and the third Class-5A crown they’ve won against Rustin.

The championship game slowed down after a 20-minute delay in the second quarter. The lights in the stadium went out and the teams were sent to the locker rooms. Play resumed after the lights went back on and the players warmed up. Rustin punted two plays after the stoppage and then the teams traded three-and-outs. On Rustin’s punt, Butler broke through the line and got a piece of the ball. Dominick Paone fell on it at the Rustin 35.

“I just saw a lane on the (punt) before and I told my teammates it’s time to make a play,” Butler, who blocked one other punt in his career, said. “Then I basically saw an opening and made a move. I was able to get there and we got that punt. That really helped us get the win.”

Running back Nyfise McIntyre picked up a first down on 4th-and-1 and back-to-back defensive penalties set up a 1st-and-goal at the four. Cornbluth punched it up the middle to make it 14-0 with 2:27 left in the half.

“We just needed that boost,” Butler said. “That’s really all I wanted to do for our team.”

“It’s 7-0 at that point,” Upper Dublin coach Bret Stover said, “you had the light thing with the pause. You never really know what you’re going to get out of that. Kyree said he saw it on the first (punt) and just went for it on the second one and they kicked it right into him… We were able to get up 14 and from there it settled in.”

“Awesome,” Upper Dublin senior quarterback Colin O’Sullivan said. “Kyree is just a player. Big-time players make big-time plays. He called it and just went out and did it. That gave us good field position and we were able to knock it in.” After Rustin ended the first half with a failed fourth down attempt, Upper Dublin (14-0) started the second half with a touchdown drive to go up three scores.

Staring Reaves returned the kickoff 23 yards to the UD 38-yard line. O’Sullivan went 4-for-5 for 60 yards to setup 1st-and-goal at the one. McIntyre scored to make it 21-0 just 2:25 into the third quarter.

Rustin (11-2) got on the board with 5:15 left in the game, but Upper Dublin recovered the onsides kick and ran out the rest of the clock.

On their first possession of the game, Upper Dublin went right down the field and scored a touchdown. O’Sullivan connected with Griffin Pensabene on 4th-and-5 and 3rd-and-8 conversions before hitting Reaves for a 33-yard touchdown on 3rd-and-14. It was a 12-play drive that covered 80 yards. Upper Dublin’s Griffin Pensabene (8) and Colin O’Sullivan (9) takes a bite out of their District 1 championship medals after the Cardinals’ 21-7 victory over West Chester Rustin in the District 1-5A final on Friday, Nov. 25, 2022. (Mike Cabrey/MediaNews Group)

“With this wind they were starting to load the box,” O’Sullivan said. “That gave us man-to-man. You can’t play us man-to-man with the weapons we have on the outside. The o-line kept me standing, which they did all night, all credit to those guys. It’s tough to stop us.”

Upper Dublin will face the winner of (12-1) Imhotep Charter and (11-1) Whitehall in the PIAA-5A state semifinals next weekend at a site and time to be determined.