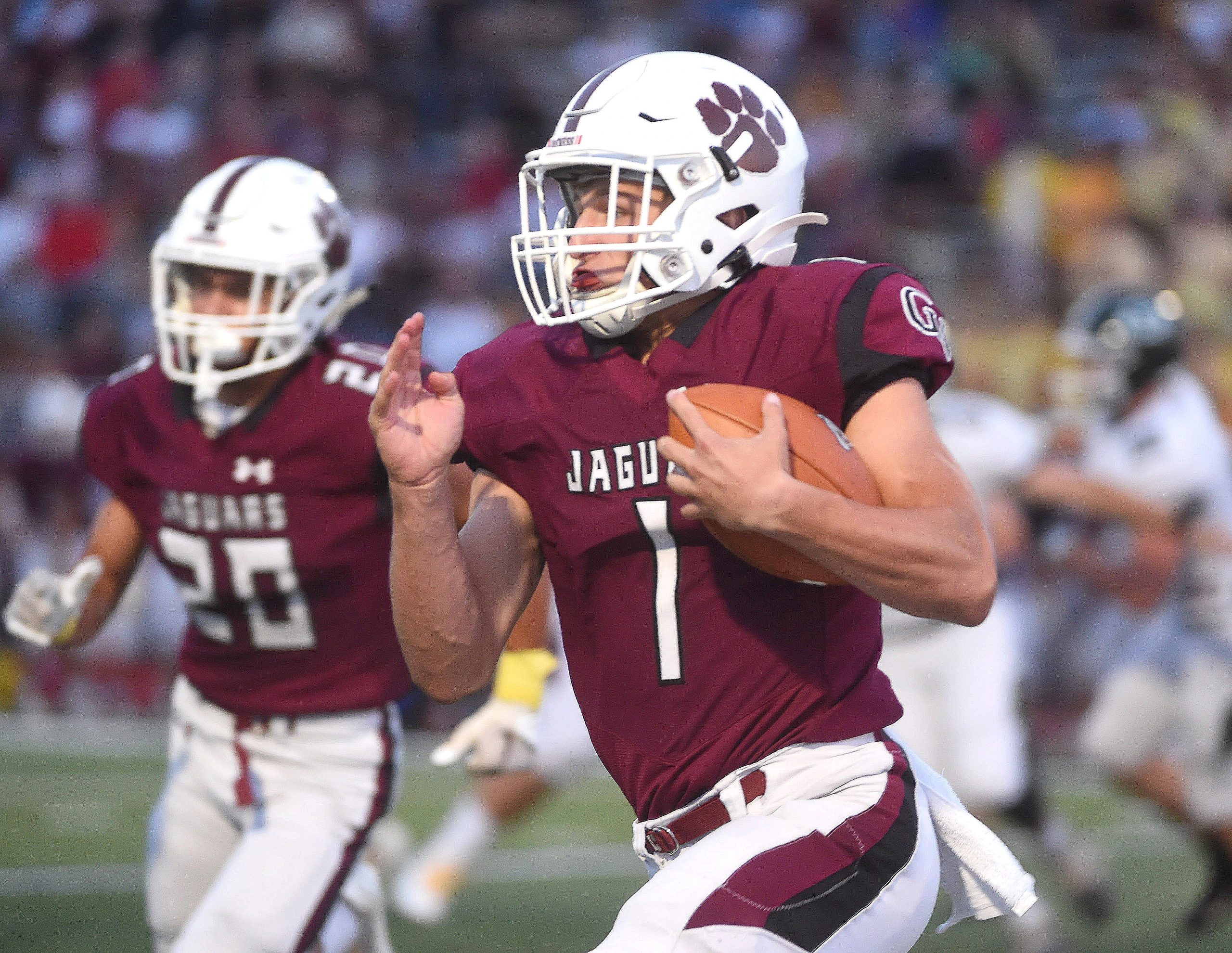 Garnet Valley quarterback Matt Mesaros picks up a first down in a game against Ridley earlier this season. (PETE BANNAN-DAILY TIMES)

GLEN MILLS — It was a balanced machine that Garnet Valley brought to the District 1-6A championship game Friday night, and quarterback Matt Mesaros was at the controls.

The senior rushed for 134 yards and a touchdown, threw for 69 yards and another score, and helped lead the top-seeded Jaguars to a commanding 35-7 victory over Central Bucks West.

“We love to compete,” Mesaros said of this group, which defended its district title in style. “We live for it. And we stick together. We’re all so close and we work so well together.”

The win advances the Jaguars (13-0) to next week’s state semifinals, to take on the winner of Saturday’s contest between Parkland and St. Joe’s Prep.

A tremendous season came to a close for the Bucks (9-5), who had their deepest postseason run in 22 years.

“The thing that hurts the most is not being able to play with the same guys again,” said senior Eli Boehm, who had 72 yards rushing and an outstanding, 33-yard catch and run for a touchdown. “When we started out 1-3, we had doubts of even making the playoffs. And then we completely switched things around.”

Vinny Cherubini added 66 yards rushing for the Bucks and Ganz Cooper had 90 yards through the air.

Garnet Valley opened the scoring on its second possession of the contest.

With power back Jason Bernard (134 yards, two TD’s) off to a great start, the Jags caught the West defense off balance, as Mesaros threw to a wide open Drew Van Horn for a 26-yard touchdown and 7-0 Garnet Valley lead.

“We finally came back to it,” Mesaros said of the play, which the Jags had been crafting for a couple weeks. “It was a great look – Drew Van Horn was wide open. All I had to do was get him the ball and he did the rest.”

CB West looked to be on its way to a tying score late in the second quarter, but two costly penalties pushed the Bucks back to the Garnet Valley 30, and on 4th-and-Goal, the pass fell incomplete to end the drive. The Bucks were penalized 11 times for 99 yards in the contest.

Garnet Valley then marched 70 yards to enhance its lead to 14-0 at the break, with Joseph Checchio pushing in from the one. The Jags would have 303 yards rushing and 69 through the air.

“The line – they work so hard and spent so much time watching film,” Mesaros said. “And the backs, the receivers – everyone works so well together.”

The Bucks’ opening series of the third quarter was capped off by Boehm’s 33-yard TD reception from Cooper. Boehm made a nice snag and battled his way into the end zone for the score that cut the margin to 14-7.

Said Boehm: “At a point, I knew I was having my last runs of the game, and I just wanted to have fun while it lasted.”

The No. 11 Bucks had seized momentum, and regained possession late in the third with a chance to tie it.

But a hit by Van Horn produced a wobbly pass by Cooper, and Checchio came up with the interception at the Buck 20-yard line.

Just one play later, Bernard took it up the gut and into the end zone, his 20-yard touchdown pushing the lead to 21-7.

“When we got that interception, we wanted to capitalize on it,” Mesaros said. “And that’s exactly what we did.”

Bernard added a two-yard touchdown run and Mesaros scored on a 57-yard dash in the fourth quarter to produce the final margin.

“It’s incredible. We put so much time in on this, and to see it pay off, there’s nothing like it,” said the QB.