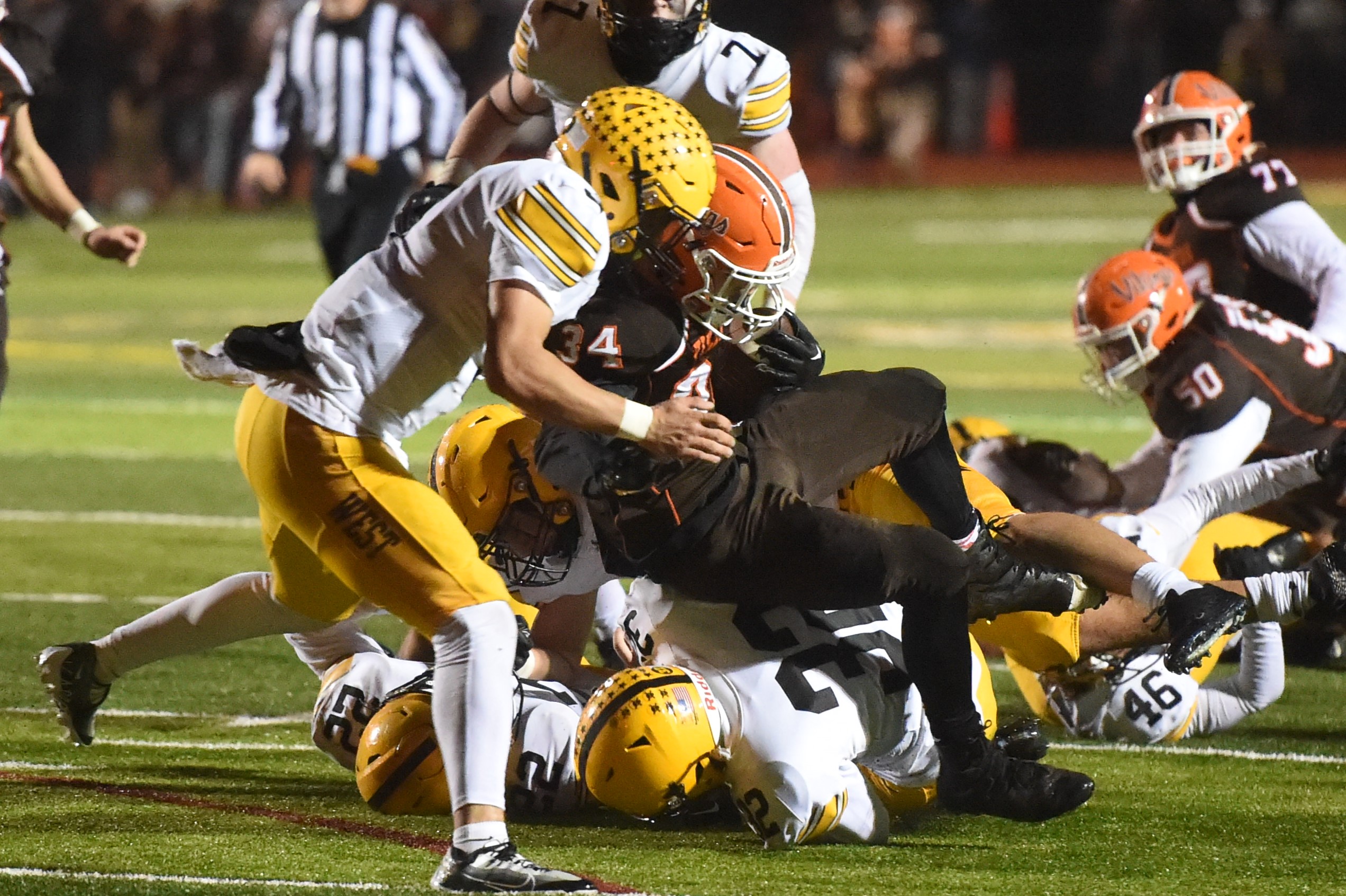 GRATERFORD >> After surviving an offensive slugfest with North Penn seven days prior, Central Bucks West’s defense returned to form and helped return the Bucks to its first District 1 final in 22 seasons.

“That game, the conditions, it was slippery,” said Jack Williams, a junior defensive end/tight end. “I feel like this week we set our defense back, we’re like this is who we are.”

Williams provided Friday night’s District 1-6A semifinal with its first points, intercepting a Perkiomen Valley pass and taking it to the end zone for a 27-yard touchdown.

And when the host Vikings struck twice for touchdowns late in the first half to take a 13-7 lead, the West defense responded. The Bucks shut out PV after halftime, allowing Ganz Cooper’s 1-yard score on a quarterback sneak and Ryan Clemens’ extra point in the third quarter to give West a 14-13 victory.

“We just wanted to set the tone,” Williams said. “We’re a smaller group and we just wanted to let them know we’re going to fight harder, we want it more. We’re just going to keep coming at you.” Central Bucks West gave up a season-high 35 points in its quarterfinal matchup with North Penn – tying a season-high the Bucks allowed in a Week 2 loss to Upper Dublin – while surrendering 410 yards of offense to the Knights, 224 of that on the ground.

But a 335-yard rushing effort by Eli Boehm aided West in keeping pace with North Penn, which led just 32-28 at halftime. The Bucks’ defense proceeded to hold the Knights to just three points in the second half, allowing West to rally for a 44-35 win.

West pulled off a similar feat Friday night, holding a Perk Valley offense that averaged 32.8 points per game and scored 30 points or more in seven of its prior 12 games to zero after intermission.

“I think that we all knew that wasn’t necessarily a true indicative notion of who we were defensively,” CB West coach Rob Rowan. “And look, North Penn’s really good offensively, they led the SOL in scoring and they got a lot of weapons.

“So this was more about ‘Hey, let’s get back to playing our brand.’ And our guys, they worked hard all week and I thought that showed tonight. I thought defensively the effort was off the charts.” Central Bucks West’s Jack Williams (7) reaches the end zone on his 27-yard interception return for a touchdown against Perkiomen Valley during their District 1-6A semifinal on Friday, Nov. 18, 2022. (Mike Cabrey/MediaNews Group)

In the semifinals, CB West limited Perkiomen Valley to a total 129 offensive yards, allowing 89 passing yards and another 40 on the ground.

“Definitely all year our M.O.’s been more physical than them and that’s kind of what we did,” said Cooper, who played at QB and safety. “I think we’ve out-physicaled them, we shut down their run pretty early but just coming in and being physical and playing football.”

Along with the defense, West also came up with a key special teams play in the fourth in back-to-back weeks.

Against North Penn, it was recovering an unintentional squib kick that led to a Cooper 1-yard TD run that put the Bucks up nine with 7:35 remaining.

Friday it was forcing a fumble on a PV punt return and recovering it with 1:54 left. The Bucks ran out the clock to reach their first district final since 2000. West faces top-seeded and defending district champ Garnet Valley – a 28-17 winner over No. 12 Downingtown East – in the title game. The teams met in the season opener, the Jaguars besting the Bucks 14-7. GV also knocked out the Bucks in last season’s district quarters 41-13.

“It feels like they’re a crosstown rival at this point,” Williams said.

Looking to score more than 40 points for a third straight District 1 playoff game, Central Bucks West twice in the first half drove deep into Perk Valley territory only to come up empty on both chances – the first ending on a fourth-down incompletion, the second after a bad snap on a field goal try.

But on the play following the field goal attempt, the Bucks defense gave the visitors the 7-0 lead as Williams came away with an interception and raced to the end zone for the pick six.

“It was just amazing,” Williams said. “Watching it in film, I saw the ball come up, made a play, went into the end zone with the teammates. It was amazing.”

Both of the Vikings’ touchdowns late in the second quarter came on short fields. An interception set up Ryan Klimek’s 21-yard TD run to tie the game 7-7 with 1:54. A short punt after West’s next series led to PV taking a 13-7 lead as Andrew Keough hauled in a Pat MacDonald pass in the end zone for a 30-yard score on 4th-and-18 with 14 seconds left before halftime.

“It hurt but we were just like all right if that’s what they’re doing, making plays like that, All right, we got ‘em,” Williams said. “Fundamentally we’re beating them, we’re just beating ‘em, we’re coming harder.”

Keough’s catch, however, gave Perk Valley its final points of the night as the Bucks’ defense gave its offense the opportunity to regain the advantage for good, which it did after Cooper ended a drive with his one-yard score at 2:41 in the third.

“Just an excellent defensive effort at every level,” Rowan said. “I thought up front we played tremendously, I thought our linebackers up to our safeties, corners. Look, you can’t turn the ball over, we talk about that all the time and we gave them a short field and it’s tough, it’s tough to make those stops. And then, look, it was a 50/50 ball in the end zone. Their kid made a great play, it was a great pass and sometimes you’re going to give those up.”