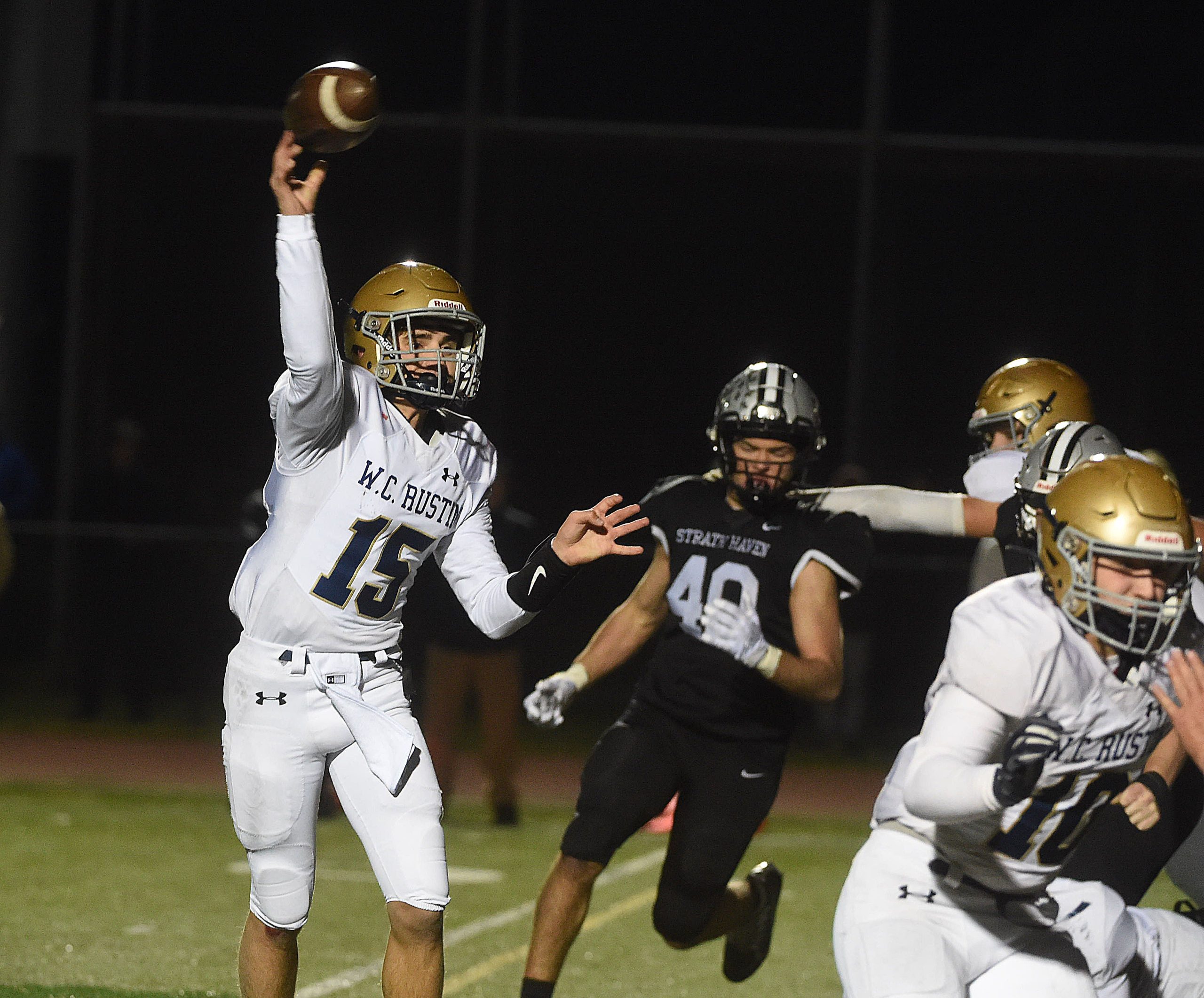 WALLINGFORD >> It was a spot that was all to familiar to the West Chester Rustin football team. In overtime against Strath Haven, this time, a spot in the district final hung in the balance. Unlike last season, the Golden Knights prevailed as Chase Hatton scored on the first possession of the extra session and the defense stopped the Panthers on a two-point conversion for a 28-27 victory in the semifinals of the District 1 Class 5A playoffs at a chilly George L. King field.

“It’s an amazing feeling,” said Hatton. “All we thought about since last year is that moment and we knew we would get our chance. We got our chance and everyone played well. We all played together. That’s a great team over there and we played just a little bit better than them.”

The third-seeded Golden Knights makes a return trip to the final where top-seeded Upper Dublin will be waiting for them.

The game was tied 21-21 when Rustin went on a sustained drive that stalled on the Strath Have 23-yard-line. Griffin Strunk lined up for a 40-yard field goal, but Strath Haven had a tremendous push up the middle and blocked the kick.

The Panthers took over and drove into Rustin territory. On a fourth-and-8, Strath Haven attempted a rare pass with quarterback Sam Milligan hitting Bob Fooskas, but he came up a yard short of the first down. David McClain took a knee and it was to overtime they went.

Rustin had the ball first in the overtime at the 10. Two runs by Damion Jacobs brought the ball to the two. On third down, Hatton took a handoff and powered into the end zone, twisting away from a tackler and reached across the line for the score.

“That’s all my linemen,” Hatton said of the score. “Damion, great runs to get us up to the two and I just punched it in. Great team effort.”

The Panthers then had their chance. They used four plays as Anthony Crawford — who ran for 193 yards on 33 carries — powered straight ahead from the one.

Strath Haven decided to eschew the extra point and go for two and win the game. The snap was mishandeled and the Rustin defense swarmed over Milligan for the stop to touch off a wild celebration as fans and players came pouring onto the field.

“It was a tough game between two good football teams and we were lucky enough to come out with the win,” said Rustin coach Mike St. Clair.

Rustin got the game off to an explosive start as Nelson Murray took the opening kickoff, found a hole and sped off to an 82-yard TD for a 6-0 lead sconds into the contest.

“It was all executed due to our barrier block and it was just well executed,” said Murray.

After the Panthers failed on a fourth down, Rustin moved 69 yards to extend the lead as Hatton bounced off a tackle and dove inside the right pylon for a 30-yard score and a 13-0 advantage.

Strath Haven came back in the second quarter. Two one-yard plunges, one from Crawford followed by one from Fooskas, had the Panthers ahead 14-13 at the half.

Rustin was driving as the third quarter came to an end with Haven still clinging to that one-point lead. That changed on the first play of the fourth as Jacobs scampered 10 yards to give Rustin the lead again. Jacobs made a leaping cath for the two-point conversion and a 21-14 lead.

Strath Haven came back midway through the quarter and tied it up as Austin Conner ripped off 58-yard TD run.

That set up the dramatic last few minutes that saw Rustin perservere and it left a smiling St. Clair to sum up what every Rustin fan was feeling.