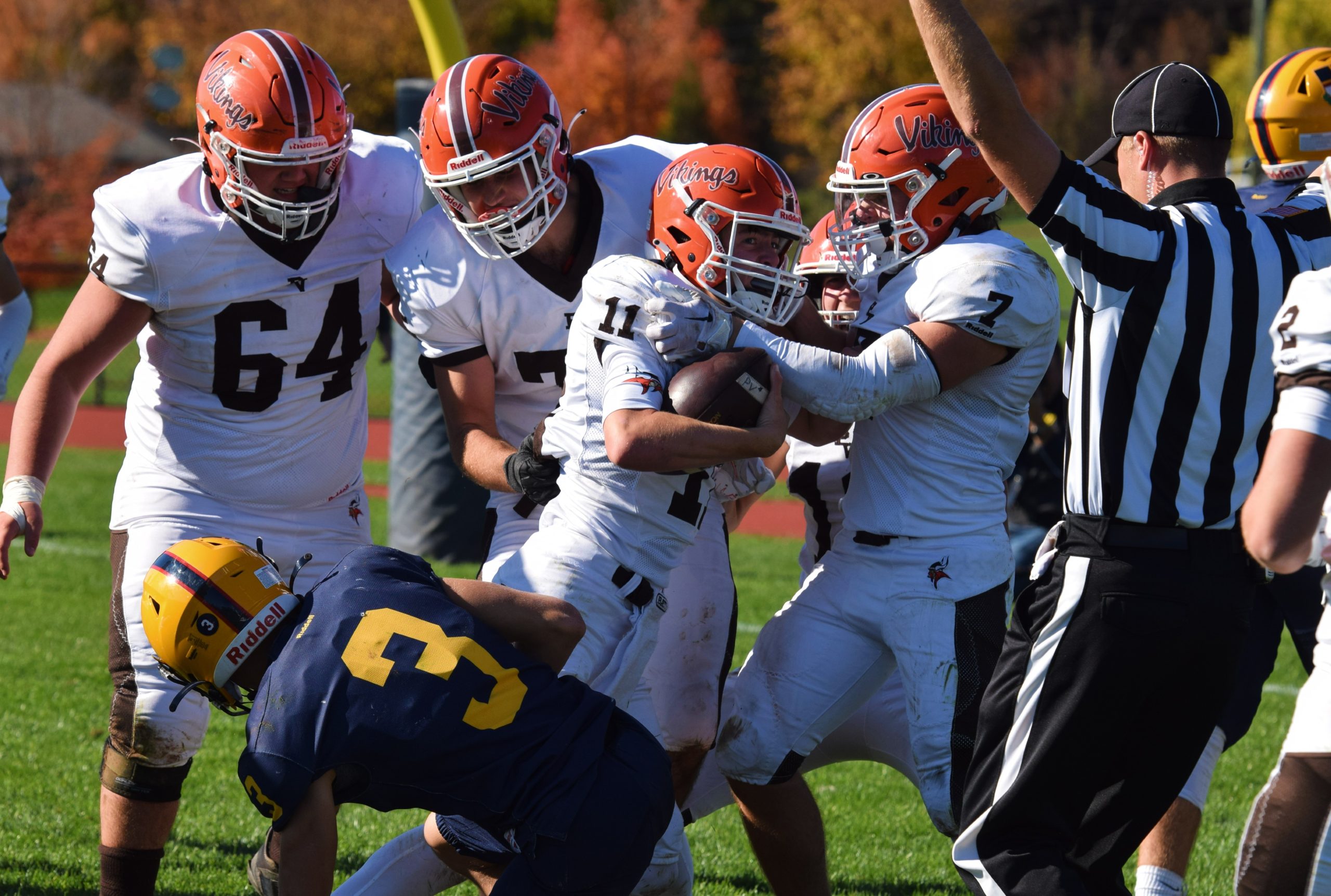 ROYERSFORD >> Scott Reed was 24 when he began his coaching career at Perkiomen Valley.

From 2004-2015, he helped build up the program to what it is today, a Pioneer Athletic Conference juggernaut. But on Saturday in the PAC championship game, Pope John Paul II’s first-year head coach was tasked with slaying the beast he helped create.

Perkiomen Valley and its stifling defense truly was a beast Saturday in a 21-14 victory over Pope John Paul II to repeat as the PAC champions, the Vikings’ fourth league title in the past six seasons. The Vikings’ defense was the defining unit as a 4th-down stop by Carson Pascoe and forced fumble by Robbie Sturges set up PV’s third-quarter scores, a 1-yard Jake Stewart plunge followed by sophomore QB Patrick Macdonald’s scramble-and-score from six yards four minutes later for a 21-7 lead.

“I was just coming off the ball hard, doing what we worked on at practice and just being strong, keep powering through,” Nelson said.

But Pope John Paul II (9-1) quickly adjusted and settled in defensively, forcing punt after punt through the remainder of the half.

Junior running back Boyd Skarbek (14 carries, 108 yards) tied the game for the Golden Panthers with 5:30 before the half on a 25-yard dash along the sideline and into the end zone.

“I think we fixed a lot of stuff at halftime,” Perkiomen Valley quarterback Pat MacDonald said. “Coach Heist, he really got us motivated at halftime and I think it really brought the energy in the second half.

MacDonald, a sophomore, found his offense in prime field position midway through the third quarter after a turnover on downs along the Golden Panthers’ 32-yard line. Driving the offense down to the 1-yard line, Jake Stewart punched it in to retake the lead for the Vikings.

Two minutes later, a forced fumble by Stewart and recovery from Vance Junker once again set up a short field for Perkiomen Valley. MacDonald cut up the middle on a keeper, dashed to his right and pushed through three defenders, breaking the plane to go up 21-7 on a 6-yard rushing touchdown at the 3:04 mark of the third.

“It was huge,” MacDonald said on the quick points. “I mean, the defense had an amazing play on the running back and got the fumble recovery. We cashed in.”

“Sexy Patty!” chants have begun from the Perkiomen Valley section.

With time winding down in the fourth, the Golden Panthers needed to find answers fast. A couple of missed big-play opportunities kept them searching until Terlesky lit the spark.

“They came to play today. I expected nothing different,” Perkiomen Valley coach Rob Heist said. “They had a great plan for us, it came down to a handful of plays here and there. Thankfully our kids made plays on that last drive, Shane (Nelson) in particular.”

Heist began his career coaching eighth grade at Perkiomen Valley alongside Reed and has since maintained the blossoming program that’s currently ranked No. 2 among Class 6A schools in District 1.

Against the No. 2 4A program in the district, the Vikings were tasked with limiting an ensemble of explosive skill position players. And in the biggest moments — like Nelson’s drive-killing sacks and Euker’s forced fumble to ice the championship — Perkiomen Valley’s defense came through. Having won nine straight weeks prior to Saturday, the last time Pope John Paul II was tested was in an overtime win over 6A Father Judge in Week 2. But the Vikings brought a full blown exam in the regular season finale.

“I knew that they were going to bring it to the 100th degree. It was a hard-fought game,” Reed said on Perkiomen Valley. “Everything was tough. Plays where we’d get big gains were 7-yard gains. Everything was tough. I’m proud of our kids. I hope this gives us a feeling of what it’s like to play playoff football.”