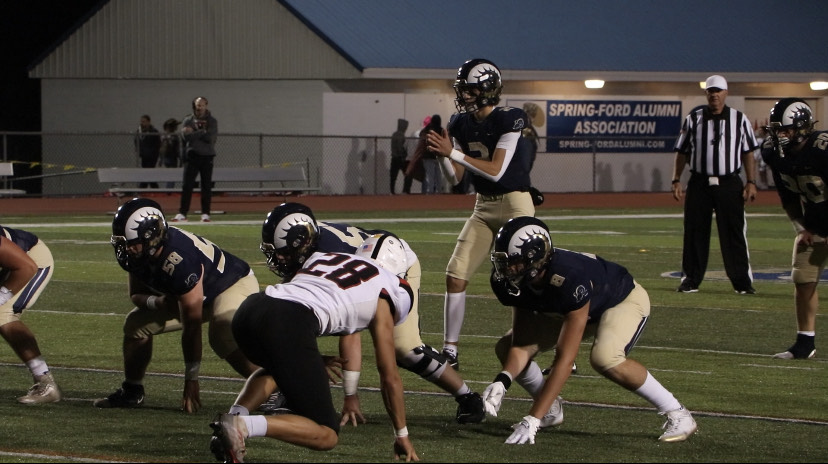 ROYERSFORD >> Spring-Ford came into Week 5 looking to snap a two-game losing streak. Well, picture that proverbial snap as a branch getting obliterated beneath its foot.

“Spring-Ford did a great job keeping the offense off the field for sure, but then again, we kicked ourselves in the foot fumbling there twice and took us out of the first quarter,” Bears coach Justin Konnick said.

Boyertown (2-3) had two turnovers, the first on a fumble along the Spring-Ford 1-yard line. After recovering on their 3-yard line, the Rams (3-2) pieced together a lengthy 12-play, 97-yard drive capped off by a 10-yard rushing touchdown by senior running back Will Fish.

Fish was a human battering ram and all 5-foot-11, 205 pounds of him chopped up 142 yards on 18 carries, adding another touchdown on a 28-yard run to the house just before the half to carry a 35-0 lead into the break.

Through the first four weeks, Spring-Ford averaged just 54 rushing yards per game. A major item on the Rams’ agenda was to establish that ground game which hadn’t been present thus far.

And with 265 rushing yards across the hands of six different members of its backfield, it’s safe to say Spring-Ford did just that.

“That was the goal. We’ve been struggling,” Rams coach Chad Brubaker said. “It’s obvious if anybody’s looked at the box scores. We’ve played two pretty good teams, but even prior to that, we had not broken out the way we wanted to break out offensively and how we want to execute.

“We pulled back a little bit this week in terms of complexity. We decided we were going to be more downhill as opposed to a read team and we took a lot of the reads, zone-read and other reads out of the game and just ran downhill. Obviously we got results.”

The results weren’t exclusive to the ground. Sophomore quarterback Matt Zollers — who entered Week 5 with a PAC-high nine passing touchdowns — threw 9-for-12 for 154 yards and three touchdowns, all in the first half.

His first came two minutes into the second quarter on an 11-yard strike to Zach Zollers to double up the Rams’ lead, 14-0.

“We were running a bunch of RPOs and the linebackers were coming up heavy and I was just throwing right behind their ears,” Matt Zollers said. “They were playing a lot of cover-zero and a lot of cover-four, and that’s pretty easy coverage to pick apart.”

Junior wide receiver Belal Abdelrahman hauled in a 16-yard end zone reception from the 6-foot-4, 200-pound signal caller to put an exclamation point on a two-play, 75-yard sprint with 7:15 left in the second quarter.

With just under four and a half minutes remaining before the break, Zollers once again found Abdelrahman in the end zone with a 12-yard dart.

“I mean, that’s Spring-Ford,” Konnick said. “Spring-Ford’s gonna go out there and throw the football and we went out there and did everything this past week to get ready for that.

“Obviously we weren’t good enough and they did what they needed to do to move the ball down the field and (Zollers) is a hell of a quarterback. His brother is a hell of a receiver and we knew coming into this game what we were up against.”

Mike Bendowski caught four passes for 46 yards and added another 75 yards on the ground across six touches. The junior closed out the scoring with a 33-yard rushing touchdown five minutes into the third quarter.

Mike Bendowski takes it 33 yards to the house.

The Rams weren’t the only ones with major offensive keys on the field. Junior running back Cole Yesavage entered the game as the leading rusher in the PAC with 518 yards on the ground and eight touchdowns.

If a shutout to open league play wasn’t enough for Spring-Ford’s defense, holding one of the strongest running backs in the area to just 27 yards on 13 carries is another box checked off the list.

That, avoiding injuries and handing the game over to second and third-stringers to get some valuable experience for the bench late in the third quarter was also a plus for the Rams.

“We did make some mistakes, but it was nice seeing different guys get touches in the second half that haven’t gotten touches all year. I think as a program, we really needed a game like this.”