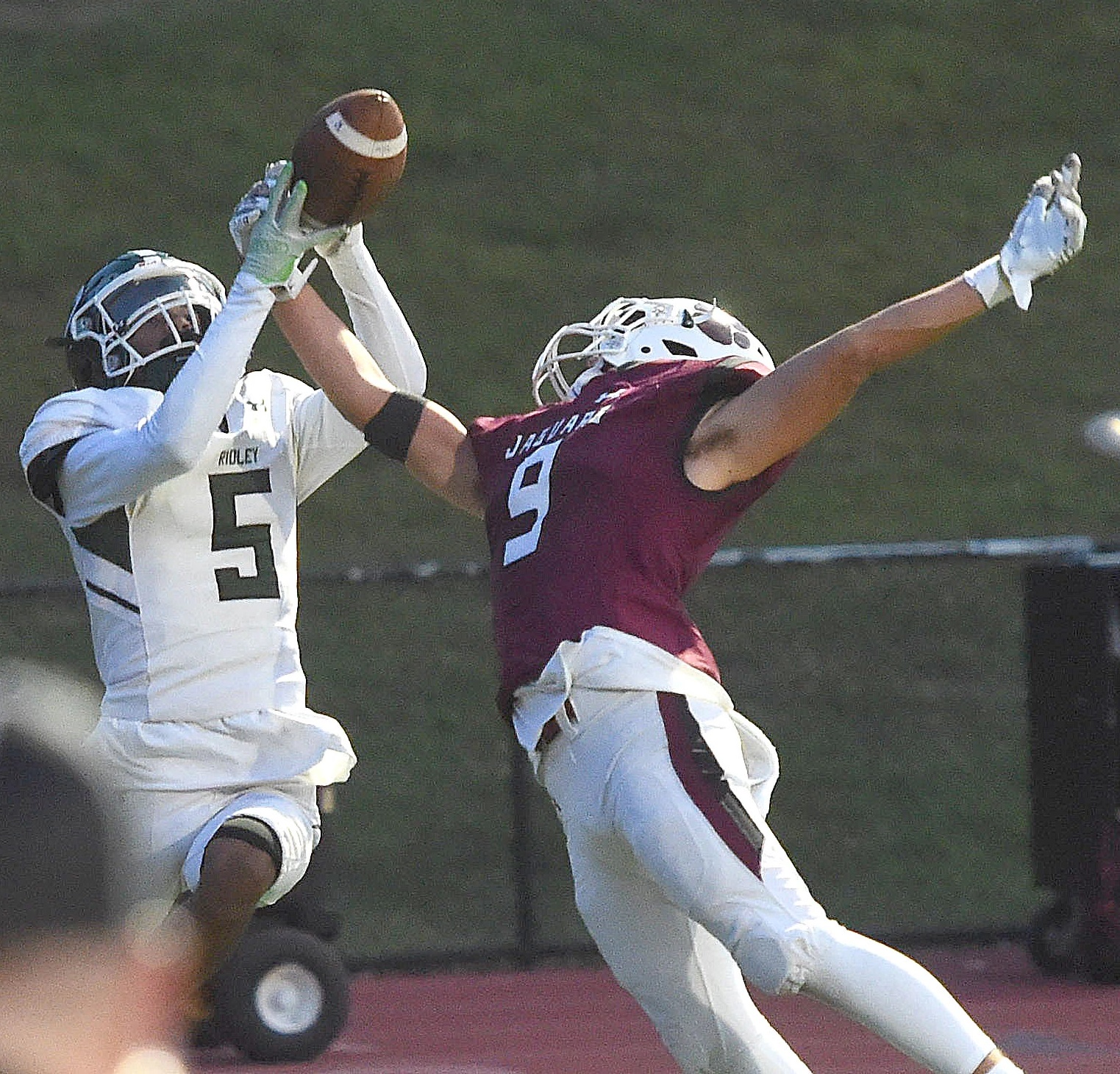 CONCORD — Ridley had ample opportunities to score inside the red zone in the first half. Garnet Valley’s defense had other ideas.

Ultimately, the Jaguars rolled to a 35-7 victory for their 37th consecutive Central League win. But the game’s outcome could’ve been much different had the Green Raiders found a way to get points on the board early.

The first such occurrence happened on the game’s opening drive. Ridley marched all the way to the Garnet Valley 9-yard line, but on fourth down, quarterback Ryan Carroll’s pass was broken up in the end zone.

In the second quarter, Ridley got inside the Garnet Valley 10 for a second time. Senior linebacker Joe Checchio’s sack of Carroll on fourth-and-goal thwarted another impressive Ridley drive.

Garnet Valley’s Jason Bernard breaks away to score a touchdown in the first half against Ridley Friday night. (PETE BANNAN-DAILY TIMES)

“When we make stops like that it just fires up the whole team, and I mean us sticking together like that in those big situations really just pulls the team together and sucks the life out of the other team,” Checchio said. “If we just continue to do that we’re really unstoppable on defense and as you can see, we just flow with energy and keep going and just eat off that.”

In the fourth quarter, Logan Hamilton intercepted a pass at the line of scrimmage and went 75 yards the other way to the end zone to put the Jaguars (4-0, 3-0 Central) ahead 28-7. The play came moments after the Jags were called for a questionable pass interference

Hamilton, a junior linebacker, is certain the pick-six was the longest touchdown of his life.

“It felt great, especially after that tough call,” he said. “We bounced back, no one hung their head, and we were able to get a touchdown.”

First-year GV coach Eric Van Wyk was impressed by his defense’s ability to correct mistakes and bear down in difficult situations.

“I was extremely impressed with how we were resilient,” he said. “Both times when they were inside the 10-yard line, the kids really stepped up. It’s a testament to Coach (Marc) Panepinto, our defensive coordinator, and our guys just sticking together. Those were big stops.”

The Green Raiders (2-2, 1-1) trailed 14-0 at half but were able to pull within a touchdown when Khameen Powell made a juggling catch in the end zone on a 9-yard pass from Carroll with 6:10 left in the third.

Powell had 10 catches for 98 yards, and Kimir Stephenson caught six passes for 44 yards. Carroll completed 21 of 34 attempts for 171 yards.

Those are solid numbers for the Ridley passing attack, but Garnet’s defensive backs limited the big play and its pass rushers were able to apply consistent pressure on Carroll, who is coming off a four-touchdown game last week against Plymouth Whitemarsh.

“No. 2 (Stephenson), No. 5 (Powell) and No. 3 (Paul Jackson) are incredible athletes and our goal was to get as much pressure as we can on the quarterback,” Van Wyk said. “We got it sometimes and there were other times where (Carroll) made some really great throws. He is a young kid, but he’s a gifted athlete. You can tell he’s going to be a really good player.”

It was no surprise that GV leaned on its ground game, which generated 177 yards by halftime. Jason Bernard ran for two touchdowns in the first half, including a 40-yard scamper in the opening quarter. Checchio added a TD run in the third quarter, and the Jags iced the win when Drew Van Horn made an amazing one-handed catch on a 44-yard scoring pass from Matt Mesaros with 6:55 to play.

Bernard led a balanced rushing attack with 67 yards on 10 carries.

Alante Smith paced the Green Raiders with 81 yards on 12 carries.

Garnet Valley plays its fifth consecutive home game next Friday against Springfield, which has lost two in a row.  Ridley is home next week to face a Penncrest team that defeated Harriton Friday for its first win of the season.