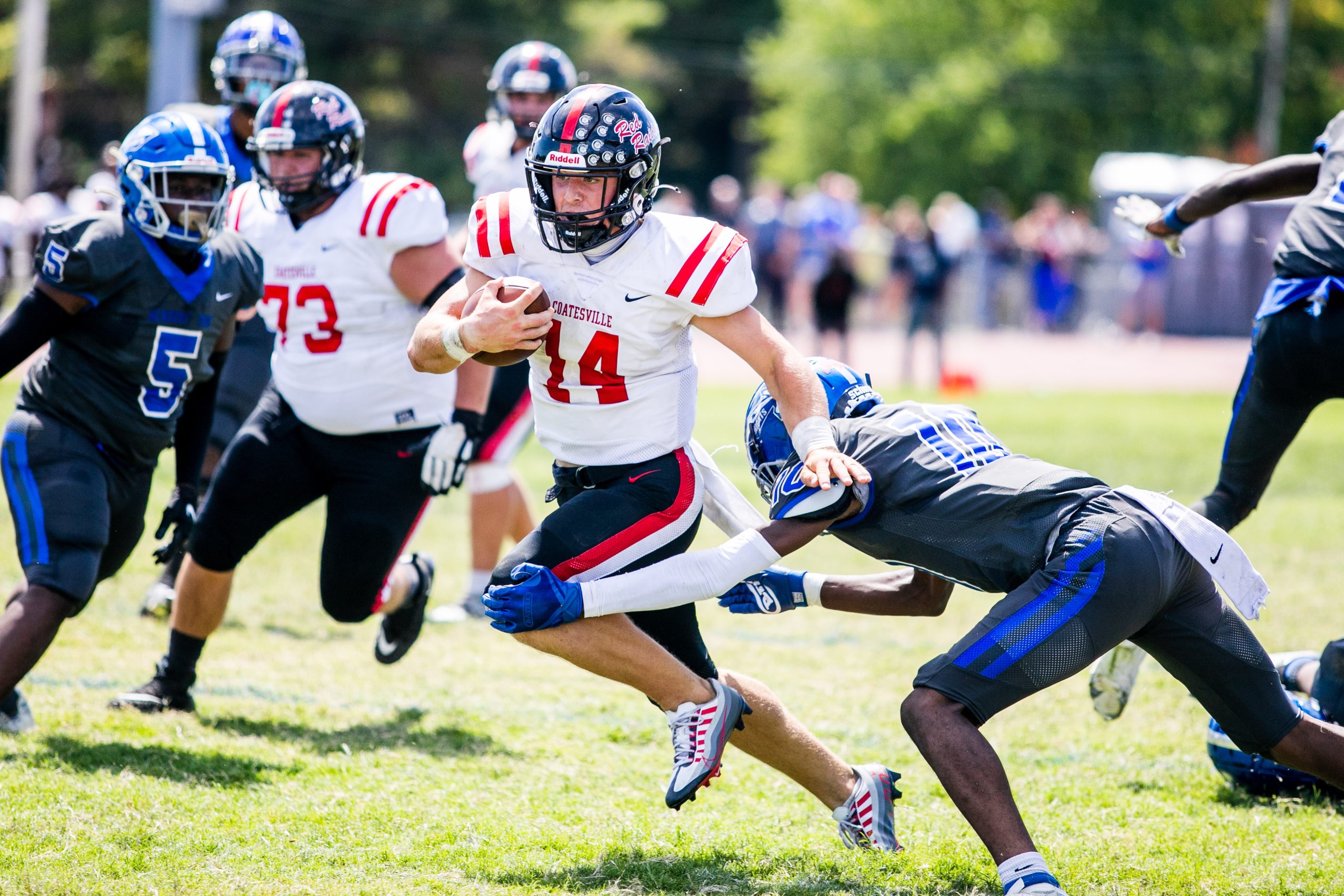 CALN >> Coatesville’s passing game was struggling, so they turned to the ground game and it proved to be a wise decision. The Red Raiders had two 100-yard rushers as they fought off Central Dauphin, 33-28, at Coatesville Memorial Stadium on Friday.

“In the last 10 years, these are two of the top public school programs in Pennsylvania,” said Coatesville coach Matt Ortega. “Even though they were 0-2, we knew we were going to get their best shot. There’s too much pride and tradition and culture on both sides. Hats off to my kids. We were cramping early, but found a way to grit it out.”

Central Dauphin trailed 21-14 by its first possession of the third quarter. The Rams then went 65 yards in 10 plays to tie the score. Quarterback Keyron Plummer scored from the 2 yard line, but the touchdown proved costly as Plummer hurt his shoulder on the play and missed the rest of the game.

Coatesville regained possession and ran two plays before Susi threw an incompletion and was tended to after cramping.

Amir Haskett came in at QB and made his one snap memorable. He broke through the line, slid past two defenders and sped to the end zone for a 35-yard TD run. The extra point was blocked, but the Red Raiders jumped back on top 27-21.

“Just a play designed for me to get in the end zone,” said Haskett. “I knew my O-line had my back and I had theirs. I was going to get into the end zone. We’re a big family, I trust them and love them the most.”

The Coatesville defense made a couple of big plays to keep the lead. First, they stopped the Rams on a fake punt on a 4th-and-3. Then, in the fourth quarter, Armon Richardson intercepted a halfback pass by David Chase.

Coatesville converted that turnover into points as they plowed 47 yards on seven plays — all runs. Damon Watson gained 36 yards on the drive, including the final nine for the score to extend the lead to 33-21.

But, the Rams fought back. Backup QB Travis Linn completed five passes on the 9-play, 73-yard march. Linn capped the drive by hitting Chase in the back of the end zone for a 22-yard score on a 4th-and-10 to cut the deficit to 33-28 with 3:21 left.

Central Dauphin was hoping for a stop to get the ball back, but it never came. Watson and Susi combined for 54 yards on the ground to run out the clock and send the Red Raiders to 3-0 and drop the Rams to 0-3.

Watson established himself as the bellcow running back the Red Raiders were looking for. He gained 111 yards — 79 in the second half — on 16 carries.

“We were really hard on Damon at the beginning of the year and all we kept saying to him was ‘Look, we’re trying to help you grow and keep working hard,’” said Ortega. “He did that and look what he did. He’s a kid who’s growing and maturing like a lot of kids on our team.”

“He had a rough two weeks,” added Haskett. “Now, he did amazing. He helped us a lot. I can’t do nothing but thank him and wish him the best.”

Susi had an off night passing, completing only six of 23 passes for 99 yards However, he ran for 143 yards on 27 carries and a TD.

Coatesville jumped on top in the first quarter, thanks to the defense. Brad Lentz pounced on a fumbled pitch and returned it 13 yards for the opening score. Central Dauphin tied it up when Plummer hit Chase for an 11-yard TD strike and it was 7-7 after one. The Red Raiders got a one-yard plunge from Susi to take the lead. Then, Susi hit Dante London on a screen pass, who took it 55 yards for the score and a two-touchdown lead.

Devin Sheppard scored on 17-yard run later in the second to slice the deficit to 21-14.

“We knew it would be a dogfight,” said Haskett. “They may be 0-3, but they’re a real good team, but we were just a little bit better.”

Coatesville travels to Penn Wood next week in a bid to stay undefeated.