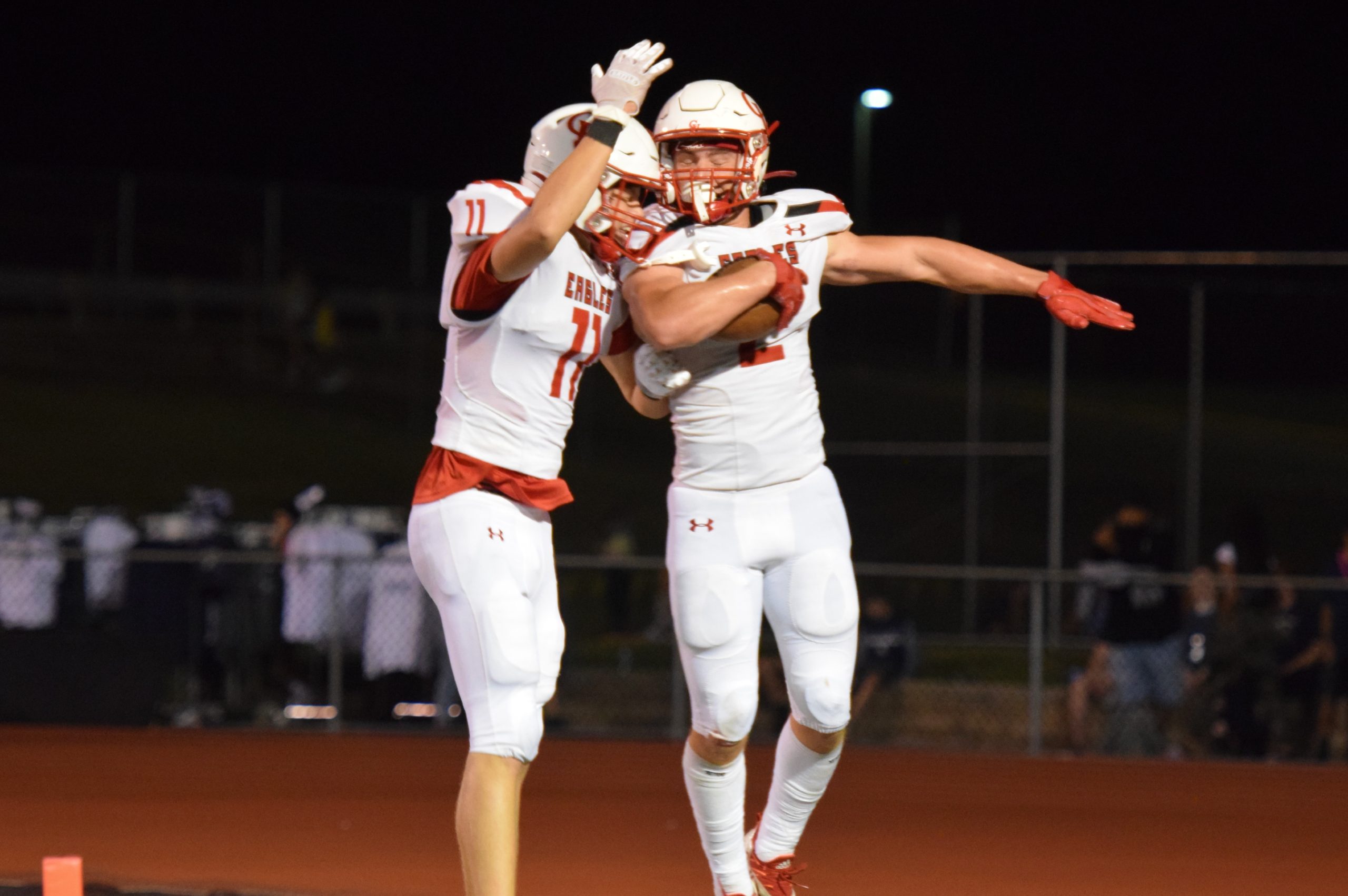 ​ROYERSFORD >> Last season, Cumberland Valley pulled out an improbable win over Spring-Ford on the final play of the contest.

Friday night at Coach McNelly Stadium, the Eagles were taking no such chances.

Cumberland Valley made the long trip from Mechanicsburg pay off with a 28-16 win over the Rams on a night where the visitors always seemed to come up with the big play.

The teams were dead even on first downs. They each had six penalties, each committed one turnover, and total yardage was comparable (321-265 for Cumberland Valley).

But the difference was Cumberland Valley’s (3-0) ability to strike in all fashions from different points on the field. Their scoring drives weren’t long – a six-play scoring foray marked the Eagles’ longest of the night – but they were authoritative. Senior quarterback Isaac Sines combined play-making ability, efficiency and poise, passing for 139 yards and two touchdowns on only eight completions, in addition to his 59 rushing yards and rushing score.

“And I thought we actually did an excellent job against him,” said Spring-Ford coach Chad Brubaker. “But there was always that second-and-long play where he escapes or extends the play — and now it’s third and two instead of third and short.

“We knew what he was capable of. He’s their conductor.”

Sines also contributed to a Cumberland Valley secondary that frustrated the Rams’ offense for long stretches, facing 40 passing attempts on the night and forcing Spring-Ford to work for their two scoring drives (eight and 12 plays, respectively). The Rams went the first 15 minutes of the second half without a first down, during which time the Cumberland Valley lead grew from 14-8 to 28-8.

On the Eagles’ second drive of the third quarter. Sines did it all, extending a play to hit Griffin Huffman for a 33-yard gain, then following a short run with a strike to an open Caiden Pines down the seam for a 27-yard score and a 21-8 advantage. After a Rams punt, fullback Josh Wagenheim burst loose on his second carry of the evening for 58 yards early in the fourth quarter, setting up Bryce Staretz’s short TD plunge to ice the game for the Eagles.

“We took this game very seriously,” said CV coach Josh Oswalt, “because we know Chad [Brubaker] and Spring-Ford have an excellent program and they’re sound in all facets.

“Josh (Wagenheim) isn’t our starting running back, he’s a linebacker — but he competes all week for those few carries. We ride the hot hand. One week it’s Bryce (Staretz), there’s Isaac at quarterback… we have a lot of contributors.”

An evenly played first half saw the visiting Eagles take the lead into the break when Sines found Paddy Hernjak over the middle for 24 yards and a go-ahead score with only 35 seconds before the break. Cumberland Valley had the better of the possession in the early going, but the two squads exchanged touchdowns and turnovers, in that order, before the Sines-to-Hernjak go-ahead score. Sines himself carried the ball over from eight yards out midway through the first quarter and kicked his own extra point for good measure.

Early in the second quarter, the Rams responded with a Matt Zollers scramble followed by a catch-and-run from Mason Scott to the CV 3. Senior Will Fish finished the drive from there, and Spring-Ford would take their only lead of the night on a two-point conversion, with Zollers finding his older brother Zach on a fade to the right corner.

But it would be the last offensive highlight for the Rams until the fourth quarter. The Zollers brothers just missed on an end-of-half Hail Mary attempt, and the Cumberland Valley defense stiffened, holding SF to 31 total yards on their first four drives of the second half before a 12-play, 79-yard journey ended in Matt Zollers’ five-yard scoring strike to Mike Bendowski. The 2-1 Rams return to action next week against Manheim Township, Cumberland Valley’s District 3 counterparts who fell to the Eagles 31-27 in both teams’ opening game on August 26.

“We got some pressure on [Sines], but we have some things to resolve in the secondary,” said Brubaker. “Offensively, we need to take what’s there for us. Stay ahead of the chains, get ourselves into second-and-five type situations. When you’re down, you can’t play from behind the chains.”

NOTES: It was the second straight season that Cumberland Valley gave Spring-Ford their first loss. Almost a year ago to the day, the Eagles turned a botched game-winning field goal attempt into an improbable touchdown as time expired for a 23-19 victory in Mechanicsburg.

Playing without kicker Liam McGarvey, the Rams opted to go for two-point conversion after both touchdowns and were successful on each attempt. Sines’ do-it-all approach spread to special teams, where he was a perfect 4-for-4 on extra points. Rated No. 10 in Pennsylvania 6A football by MaxPreps before the game, Cumberland Valley returns home next week to face Central Dauphin East before traveling to play Harrisburg, ranked No. 3 among 6A teams in the state.

“In my opinion, [the Mid-Penn Conference’s Commonwealth Division] is the toughest in the state,” said Oswalt.