Football: Light a Gicking on the sidelines, Marple Newtown has drama-free night 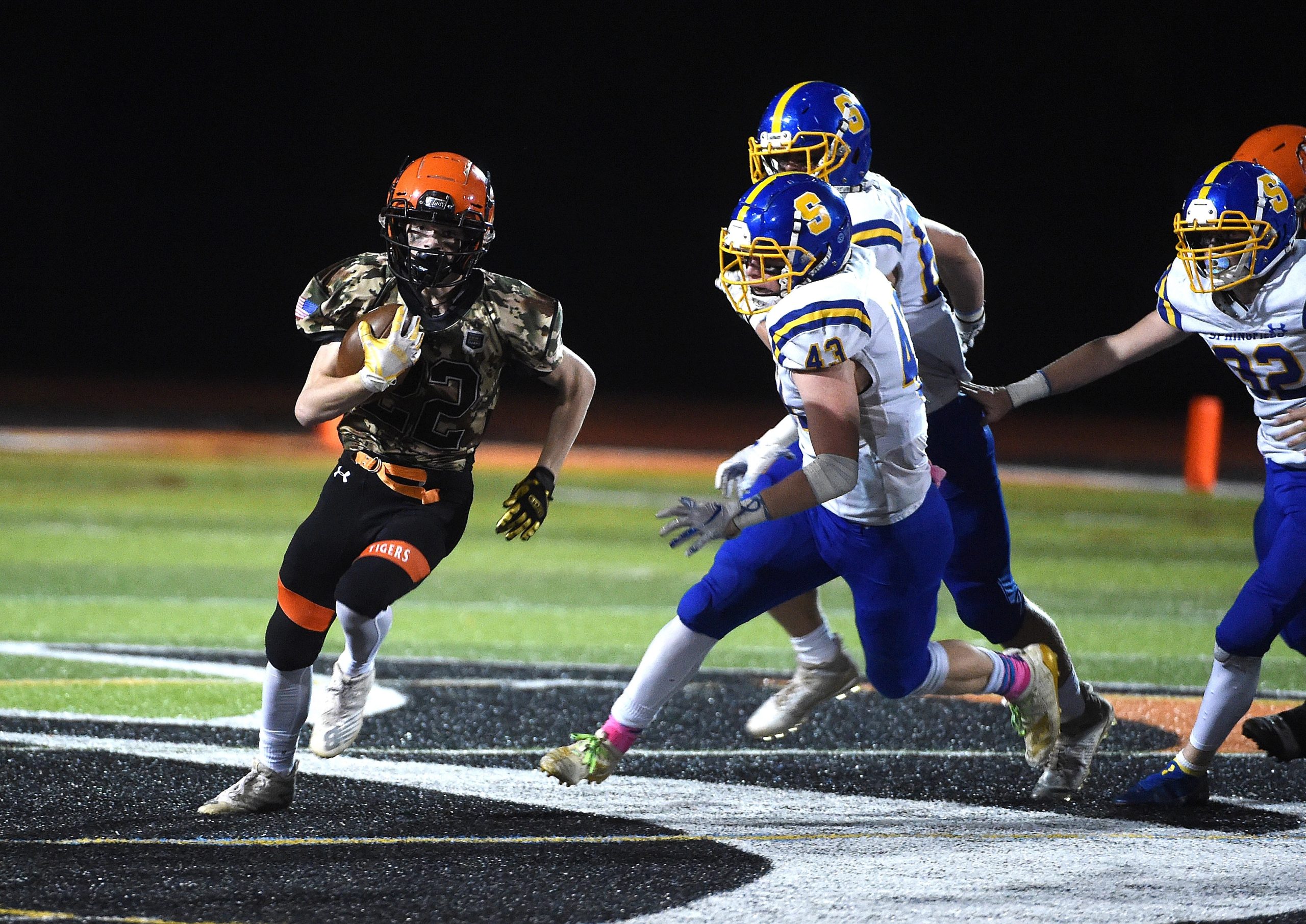 MIDDLETOWN — Chris Gicking hesitated before he tried to speak about a subject that brought out a deep emotional response Friday night.

“He got up in the middle of the night and drove himself to the hospital the other day,” Gicking said, when asked why his father, Harry Gicking, a long-time Marple Newtown assistant coach, was not on the sideline. “You know how tough guys his age think they are. He’s in Bryn Mawr Hospital, but he’s going to be fine.

“He was just mad about missing practice the other day. And he got mad at my mother when she didn’t bring him something he wanted so he could (keep up with what we were doing).”

Gicking kept his father up to speed with the Tigers’ preparations for Friday’s visit to Louis Scott Field for their Central League opener against Penncrest.

“He finally sent me a message,” the younger Gicking said. “He just told me to stop texting him and go out and get a win.”

The Marple Newtown players, knowing what was on their head coach’s mind, responded with a big first-half effort, a strong showing in the third quarter and the win assistant coach Gicking asked for, 37-6.

The Tigers (2-0, 1-0) built a 24-0 halftime advantage, led 37-0 after three quarters and did not surrender a point until less than six minutes remained on what, by that time, was a running clock.

Penncrest’s first possession lasted four plays before Jimmy Hally fell on a Lions’ fumble. A 24-yard Bertoline completion left only one yard for Box to cover for the second score.

Two plays later, another Penncrest fumble fell into the hands of Marple’s Jacob Eck, and this time the Tigers covered 43 yards in six plays, with a 15-yard Box run setting up his one-yard run.

Box had a 27-yard run to open a 74-yard march that opened the second quarter. A 15-yard, dead-ball personal foul pushed Marple back to the Penncrest 24, and when two Bertoline completions left the Tigers short of a first down, Ty Can kicked a 30-yard field goal.

“We tell the kids that every week we have to get better,” Chris Gicking said. “Each practice we want to build on things. Pretty soon little things turn into big things.”

A 20-yard Sean O’Donnell to Owen Campbell connection got Penncrest across midfield for the first time late in the first half before the Lions turned the ball over on downs.

Can dumped O’Donnell for a two-yard loss as Penncrest’s first second-half possession came up short. Four plays later, Can was on the receiving end of a 30-yard Bertoline TD toss.

The Tigers’ first-stringers got one more chance to move the ball, with Paul Defruscio carrying five times in a six-play drive, including a 15-yard scoring run.

Junior Jake McGowan, the starting offensive left tackle who played center as a sophomore in 2021, was happy that he and line mates Jason Bennett, A.J. Diianni, Josh Tiger-Wesley and Gavin Cooney could help their team pile up close to 300 yards of total offense.

“The thing is just to have everyone doing their jobs,” McGowan said.

McGowan moves over to end when he is on the defensive line.

“Again it’s just that you have to do your job,” he said. “They (Penncrest) run an interesting offense with all their option plays. Every single person has to do what they can do to stop them.”

The one time the Tigers didn’t stop the Lions was in the first six minutes of the fourth quarter, when Penncrest used 13 plays to go 83 yards for its six points. Spencer Tyson had runs of 19, 14 and eight yards before O’Donnell scored on a 10-yard scramble to the end zone.

By then, if anyone in the Gicking family was sending text messages to Harry in Bryn Mawr, they were sure to relieve any anxiety about missing the game.