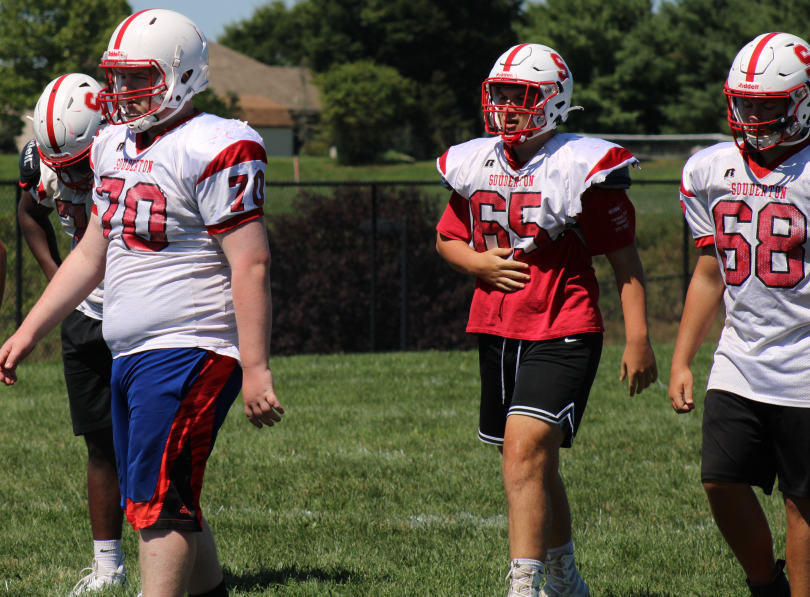 Souderton Area linemen get ready for a drill during their practice on Friday, Aug. 12, 2022. (Kev Hunter, MediaNews Group).

Souderton comes into this one 1-0, fresh off an impressive 27-7 win over Haverford. Pennridge looks to avoid an 0-2 start, as the Rams are coming off a 31-13 loss to Downingtown East.

Shaun Purvy made it a memorable return last week for Big Red.

The versatile Purvy sat out almost all of 2021 with a broken bone in his leg, but he quickly made an impact in 2022. Purvy’s 71-yard touchdown reception on the second play from scrimmage last Friday night provided early momentum in a battle of playoff squads from a season ago.

He was part of a sparkling offensive performance from Big Red, who controlled the game and the clock and executed well on Opening Night.

Also standing out was Chris Kerns, who rushed 12 times for 97 yards and a touchdown as well as scoring on an interception return to help backbone a strong defensive effort.

Said Purvy after the win: “We knew we were good. We knew we’ve been good. As long as we play confidently, we know we can have a really good year.”

Pennridge looks to even its record this week with a battle against Souderton Area. (Kev Hunter, MediaNews Group).

Pennridge, meanwhile, is looking to bounce back.

The Rams look to get their passing offense untracked and for their defense to more stingy against the run.

Brennan Fisher had a magnificent night for Pennridge in Week One, piling up 182 yards and two scores, including a 73-yarder in the game’s opening moments. The Rams’ secondary was also a force all evening.

There have been many memorable contests between these two area rivals. It’s the first meeting since 2020, when Souderton prevailed 31-17 in the District 1-6A Final.