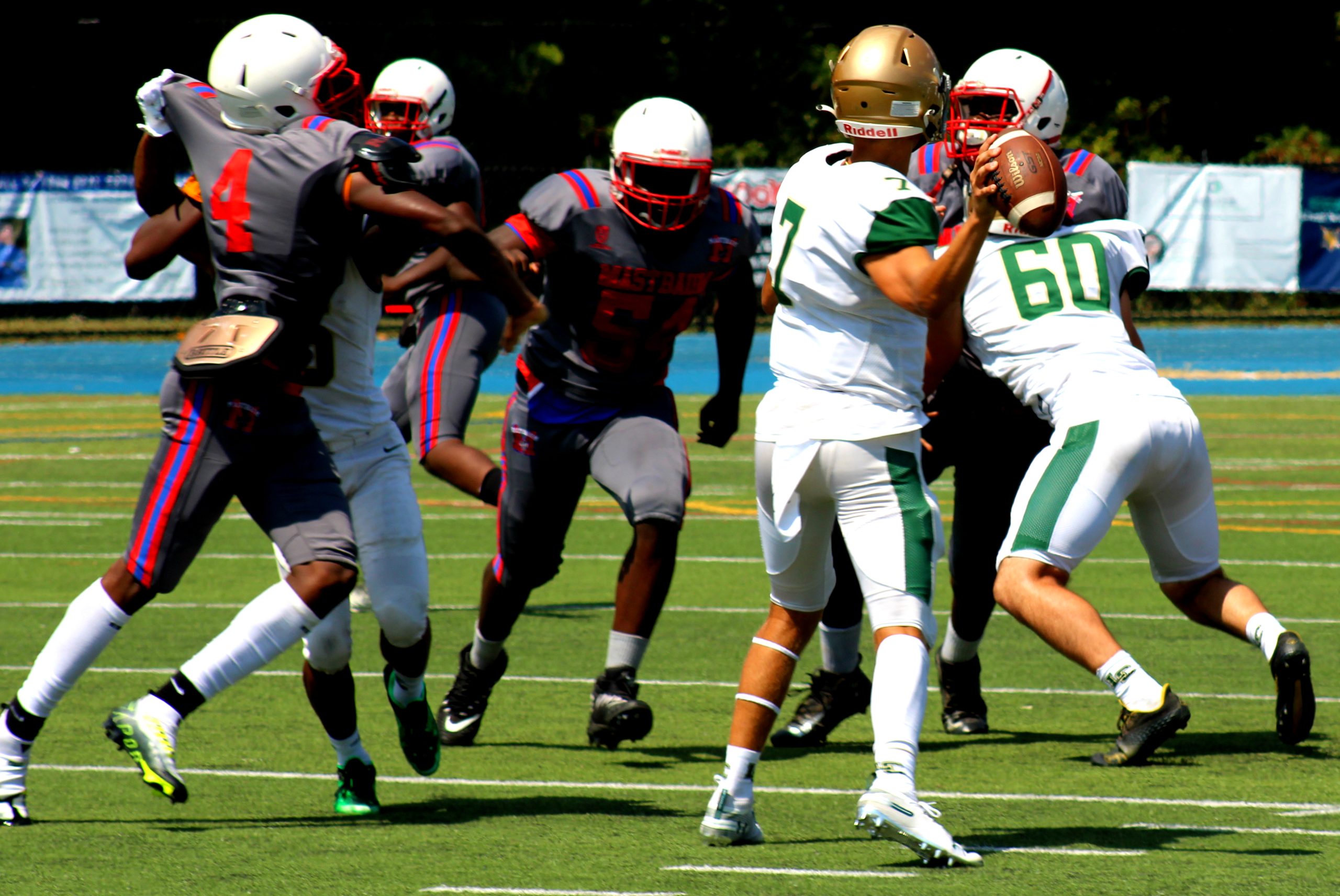 LOWER GWYNEDD >> Lansdale Catholic coach Dominic D’Addona called it the first “payday,” as his Crusaders cashed in their offseason work for a 49-8 Opening Day win over visiting Mastbaum Vo-Tech.

“I think it’s a great start,” said LC quarterback Cole Meehan, who threw for a pair of touchdowns and ran for another. “I’m happy with it but we have a long season to go. It’s one down and I’m ready for the next one.”

The Crusaders scored on their second and third plays from scrimmage and needed just 34 plays in all to score their 49 points. LC led 35-0 at the half – enforcing the mercy rule – and moved the ball in waves on the hot Wissahickon turf.

“I think the offense ran well today. I feel like it started with the guys up front,” Meehan said. “Our o-line really had a day. The holes were huge. The protection was great, which helped the receivers get down field and helped me make my reads.”

LC coach Dominic D’Addona talks to his team after their win over Mastbaum. Kev Hunter, MediaNews.

Meehan completed 8 of his 10 passes for 117 yards and two scores.

After a 30-yard bolt by Jacahi Streeter – who cut and dashed his way to 52 yards rushing on four carries – made it 7-0 LC, Meehan connected with James Webb Jr. for a 26-yard TD and a 14-0 advantage less than six minutes into the contest.

Just before the end of the first quarter, Meehan rolled right, then cut it back left, sprinting 32 yards for a score and a 21-0 lead.

Lansdale Catholic quarterback Cole Meehan threw a pair of touchdown passes and also ran for another in the win over Mastbaum on Saturday, Aug. 27, 2022. Kev Hunter, MediaNews.

“How we finished up last year (1-10), to come out and work hard all winter long, today was the first payday, the first of many. It was a nice team win,” said D’Addona. “Everybody was into it, everybody had each other’s back, and we just kept moving along. We have a ways to go, but we did what we can do. Everybody played to the best of their abilities.”

An 8-yard scoring strike to Streeter and a five-yard burst by Ian Gramlich ran the lead to 35-0 at the half, and enforced the mercy rule after the break.

With a good hold by Bobby Caruso (12) and good blocking by Jon Dang (55) and company, Lansdale Catholic’s Eddy Schlotter kicks one of his seven extra points against Mastbaum. Kev Hunter, MediaNews.

LC’s defense was just as impressive.

Efrain Quiles (35 yards) and Nicholas O’Brien (22 yards) each broke free for touchdown runs in the third quarter to make it 49-0. The visitors broke the shutout with 4:13 to play, on a four-yard TD pass from Vega to Hopkins off a deflection.

“We’re definitely ready for Boys Latin. We’re gonna have a long week of practice, prepare, watch film, study,” Meehan said. “We’re all in this together so I feel like the team’s gonna have a fun one next week.”

Fun in the Sun: Lansdale Catholic fans turned out for the first home game of the season. Kev Hunter, MediaNews.