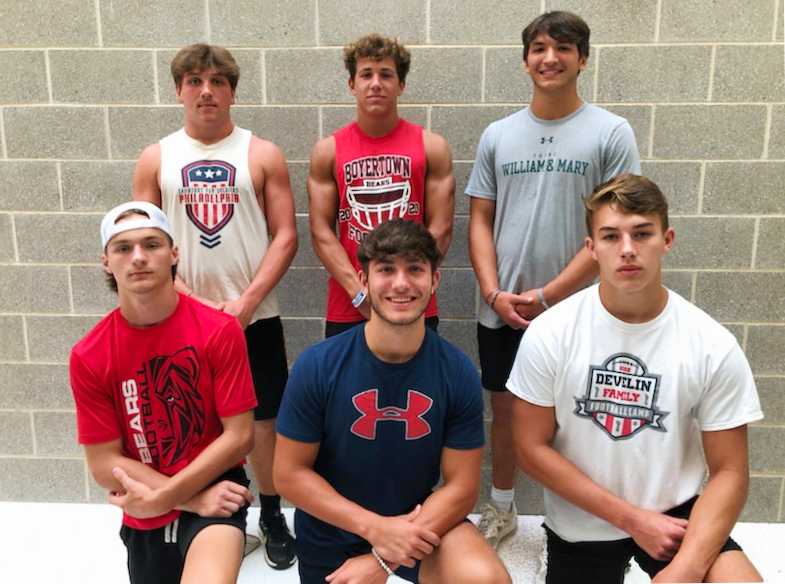 One week ago, he was preparing Boyertown’s American Legion baseball team for competition in a national regional tournament in West Virginia.

This week, Justin Konnick was back on the practice field … albeit under different circumstances. He’s embarking on his head coaching career with Boyertown High’s football program.

Three days into the preseason training phase, the players are solidly invested in what their “new” coach — he previously was an assistant to Miller, working with special teams — is bringing to the practice field.

“We have a lot of workouts that are more rigorous,” Anthony Panarello, a senior quarterback/linebacker, said. “It’s going good. We’re excited about the season starting.”

Konnick is seeking to bring to the gridiron Bears a measure of the success he’s instilled in baseball teams locally. Boyertown Legion was 24-11-1 this summer, runner-up in Berks County League and Pa. State tournaments and a qualifier for the Mid-Atlantic Regional.

The high-school football program, by contrast, went 1-4 in the Pioneer Athletic Conference’s Liberty Division, 3-7 overall in 2022. To effect that turnaround, Konnick’s pushing the idea of personal accountability and responsibility by his players.

“We’re holding the kids accountable for their actions,” the 1997 Boyertown graduate and two-way performer said, citing the classroom as a staging area for the mindset. “I’m trying to bring back the things that were taught to me.”

Boyertown quarterback Anthony Panarello (12) rushes to the outside as Upper Perkiomen’s Damon Faraco closes in during their game in 2021. (Austin Hertzog – MNG)

Konnick and his coaches are working to install new systems on both sides of the ball. Offensively, the Bears are learning a variation of the wing-T another Boyertown quarterback, junior Ryder Gehris, described as taking out the “option” and bringing “more stability to the offense.”

“We’re starting to jell,” Gehris said. “Things are looking up.”

Defensively, Boyertown is perfecting the “40 nickel,” a specific type of defensive scheme with five defensive backs and four defensive linemen. The rest of the alignment has two linebackers, one in pass coverage.

The “40” is designed to prevent pass completions without giving up too much on the ground.

“Defense is our strong point,” Cole Marinello, a senior figuring to see action at offensive and defensive end, said. “We have big bodies on the line. We have a blend of size and speed.”

Gavin Chamberlain and Anthony Famularo will be looked to for contributions at linebacker. More help is being sought from senior Nathan Deming, who will bring size to the D-line as a tackle; Jason Oakes, a junior at safety; Cade Sennott, another junior bringing versatility to the secondary; and junior Nick Panarello, who’s looking to help out on the offensive line as well as defensive end.

“Our strength will have to be our line and linebackers,” Konnick said. “Offensively, we have kids who can run and have speed.”

“We’re all starting to put it together,” Famularo added.

Panarello is coming off a junior season that saw him with 30 pass completions for 435 yards and three touchdowns. He and Gehris man the signal-caller’s spot alongside junior fullback Cole Yesavage and Famularo, who are being looked at to fill the gap left by the graduated Leo Egbe.

Egbe rushed for more than 1,000 yards and 14 touchdowns his senior year, third in the PAC.

“They’re going to get a lot of looks and carries, alongside other guys,” Konnick said. “But they’re the main guys right now.”

Conditioning has been an area of emphasis for the Bears.

“We’ve done more in-season work,” Chamberlain noted. “We were also doing weight lifting off-season for those able to come in.”

“We may not be the best team,” Konnick said, “but we’re going to be the most physical and most in shape.”

Another strong suit has been the leadership displayed by Boyertown’s senior class. Konnick praised them for the way they’ve led their younger teammates in weight training and the transition into a new era of Bear football.

“They’re the leaders of the group,” Konnick said, “and they’re showing it with their actions. They don’t want their backups to fail. They want to make their own chain, and hold their own trophy.”

“The kids are excited to be here,” Panarello added. “The attitude is good by the seniors. We’re trying to have a brotherhood.”