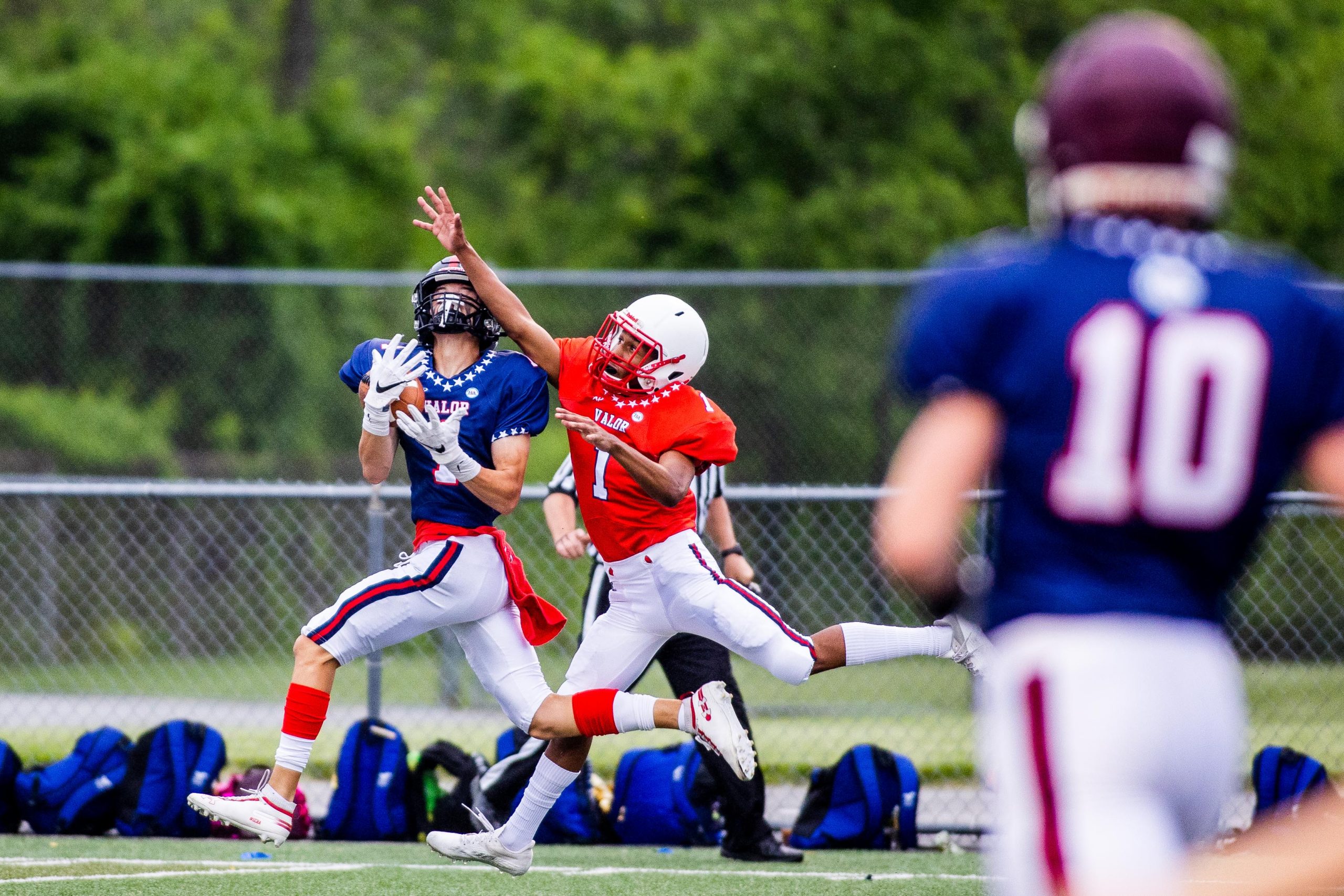 DOWNINGTOWN >> After a two-year absence, due to the COVID-19 pandemic, Chester County’s all star football game, the Valor Bowl, returned, Thursday night at Kottemeyer Stadium.

The game followed much of the script from the 2021 Ches-Mont League season, with Bishop Shanahan’s Cooper Jordan and Coatesville’s Tommy Ortega putting on a show through the air.

Team Allison, comprised of players from the National Division, as well as Kennett and Ortega, overcame Team Carroll, which was represented by the remaining Ches-Mont teams, along with Conestoga and Malvern Prep, 26-7.

Jordan was named the James G. “Chunky” Klunk Most Valuable Player award after a pair of touchdown passes and another on the ground.

“I’m truly blessed,” Jordan said. “I’ve worked super hard to get to this point and it’s all about the hard work. It’s a blessing and I owe it to my teammates, because this wasn’t possible without them.”

Bishop Shanahan’s Cooper Jordan scrambles, on a night when he was named the Valor Bowl’s Most Valuable Player. (Nate Heckenberger – For MediaNews Group)

Jordan got Team Allison on the board in the first quarter with a scamper off the left side. After a touchdown pass to Ortega was called back later in the first, the two connected officially in the second to head into halftime leading, 13-7.

Ortega caught his second TD of the night in the fourth to ice the game and was named Offensive Player of the Game for Team Allison.

“It’s a great event and it’s great that it made the kids happy to be with us,” Ortega said. “It was good to be around them and just a great experience.”

Coatesville’s Tommy Ortega catches a touchdown pass, that was called back due to penalty, in the first quarter. (Nate Heckenberger – For MediaNews Group)

The game benefits the Believe and Achieve Foundation, whose mission is to serve the youth in the community, “particularly those most vulnerable.” Wednesday night, the teams helped run an All-Abilities pregame pep rally, where athletes with special needs were able to go through drills and interact with the Valor Bowl athletes.

Thursday, “buddies” with the Believe and Achieve Foundation escorted the Valor Bowl players during introductions.

“It’s a great cause and to get to be a part of it is a great experience,” Team Carroll’s Christian Lariviere said. “Being able to be under the lights one more time was great.

Lariviere, who repped Conestoga, had a first-half interception and was named Defensive Player of the Game for Team Carroll.

Great Valley’s Andy Talone was named the Offensive Player of the Game for Team Carroll, with a touchdown pass to West Chester Rustin’s Mike Lighthill in the second quarter.

“It’s awesome,” Talone said. “Everybody out here I’ve been playing with my whole career. It’s always been against them, so to strap it up together, it shows how the whole community can come together. It was a fun experience and it’s something I’ll never forget.”

Downingtown West’s Will Mahmud scored a rushing touchdown for Team Allison in the third quarter, and Avon Grove’s Hunter Traa picked off a pass, but it was Traa’s teammate, Josh Reuter, who was awarded Defensive Player of the Game for Team Allison.

“It really means a lot,” said Reuter, who made his impact from the defensive end position. “I made a bunch of new friends and played with some old friends. In the locker room I pray to God that he would show me who I could be, and he answered, so it does mean a lot.”

Downingtown West’s Will Mahmud, who scored a touchdown for Team Allsion, tries to break a tackle in the fourth quarter. (Nate Heckenberger – For MediaNews Group)